For participants at this week’s Prescribed Fire Training Course at Camp Robinson, that lesson can’t be emphasized enough. About 40 participants, representing state and federal agencies as well as the forest products industry, are taking part in the weeklong “short course,” that teaches how to both plan and execute controlled burning as an essential tool in the management of natural resources, said Prof. Tamara Walkingstick, associate director of the Arkansas Forest Resource Center and extension forestry specialist. 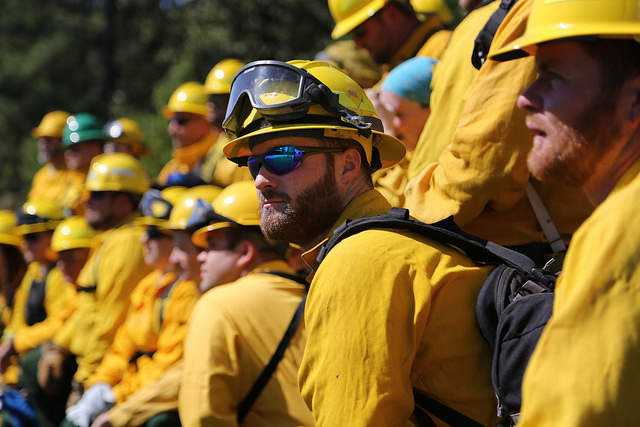 Participants in the Prescribed Fire Training Course at Camp Robinson participate in an instructor-led controlled burn on a Sept. 23, 2015 40-acre wildland section of Camp Robinson. The weeklong course trains students in the planning and execution of controlled burns as a natural resource management tool.(Image by Ryan McGeeney.) Credit mandatory.

“The goal of this workshop is to take natural resource managers in any type of arena, and either introduce them to using prescribed fire as a management tool, or hone those skills if the managers already have them,” Walkingstick said.

According to the Arkansas Forestry Commission,  the six primary purposes of controlled burns are:

She said much of the classroom instruction during the course is dedicated to understanding natural factors that may affect a controlled burn once it is ignited.

“It is not just going out and lighting a match,” Walkingstick said. “The key is understanding the weather. The ultimate goal of the course is to know what your fire is going to do before you light that match. It’s relative humidity, it’s temperature and air stability. Is there a pressure front coming through? Is it a red flag day? Where is the prescribed fire located? Where is it in relationship to water?”

Adriane Barnes, spokesman for the Arkansas Forestry Commission, said the course is conducted once a year, and is required professional education for natural resource managers in many agencies. It was developed by the Arkansas Prescribed Fire Council in 1997, and the course has been held every year since, she said.

“Prescribed fire is a management tool,” Barnes said. “It’s not people playing with fire or being irresponsible with a sometimes-dangerous undertaking. It is a strategic use, a carefully-managed plan, and it’s something that requires maximum safety and training to be successful.”

According to data from the Arkansas Forestry Commission, more than 224,509 acres were burned under controlled circumstances in 2014. More than a third of the 1,078 controlled burns were conducted by private industry and individuals.

“It controls the non-native grasses, like bermudagrass and fescue,” Walkingstick said. “It prepares the soil, and frees native seeds below the surface of the soil by removing that duff and other material, and helps these plants jump up and grow.”

“There’s a limited amount of growing space,” she said. “Any piece of land can only support so much of anything, and that includes trees, flowers and grass.”

After participating in at least one instructor-led controlled burn on a 40-acre section of wildland at Camp Robinson, students will operate in four teams of 10 and conduct their own controlled burn Thursday after creating a detailed burn plan for the operation.

For more information about forestry, visit http://uaex.uada.edu/environment-nature/forestry/default.aspx  or the Arkansas Forest Resources Center at http://www.afrc.uamont.edu/.

To see where prescribed burns are scheduled in Arkansas, visit www.arkfireinfo.org.