BACK GATE, Ark. — A new variety of conventional, high-protein, high-yield soybeans, developed by researchers at the University of Arkansas System Division of Agriculture, is now thriving in real-world conditions in southeast Arkansas.

The variety, UA5814HP, was developed by Professor Pengyin Chen, a soybean breeder at the University of Arkansas. Earlier in 2015, the variety was licensed to the Natural Soybean and Grain Alliance, which branded it as “Ashlock HP5A,” named in part after Lanny Ashlock, the organization’s current chairman. 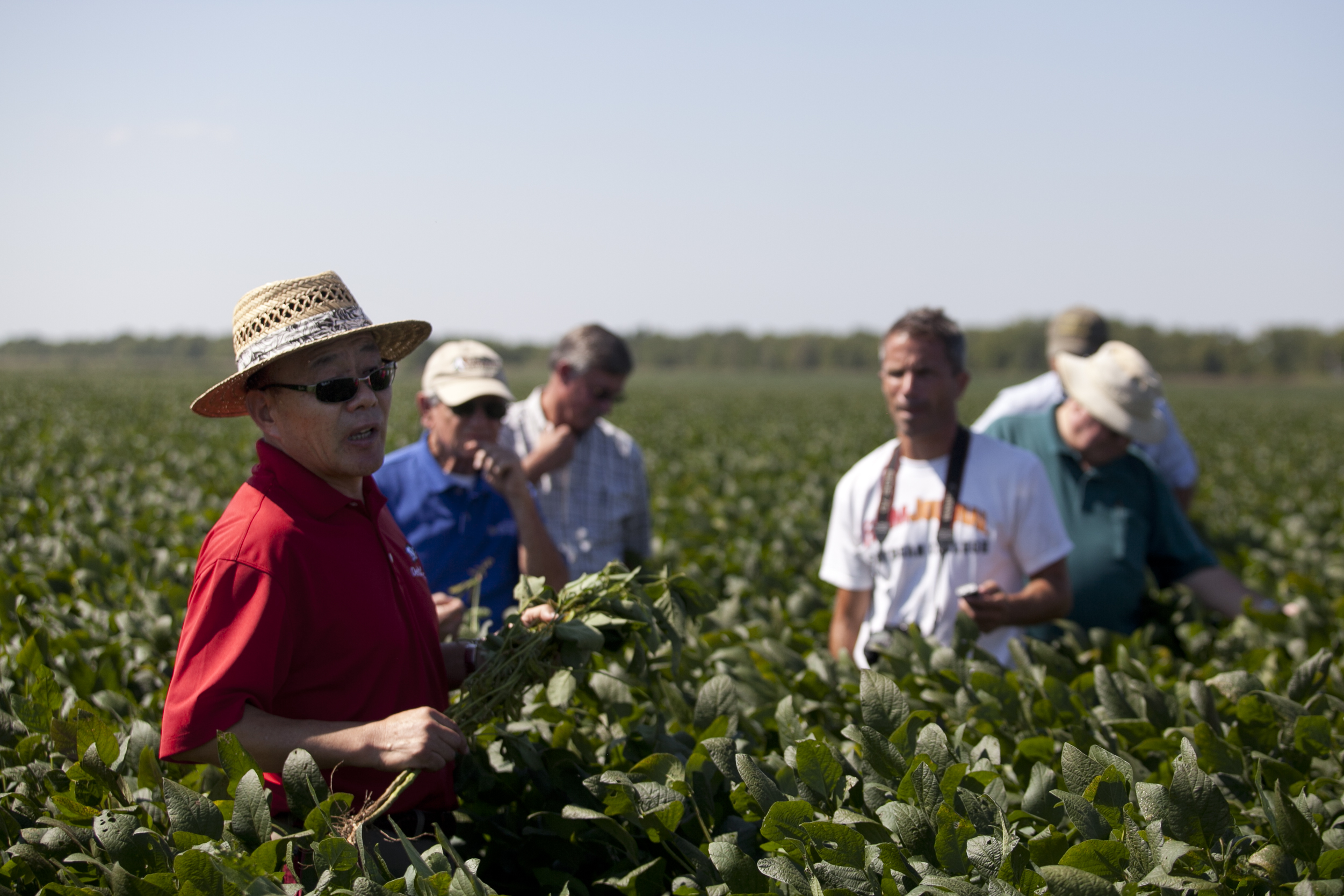 Professor Pengyin Chen, left, a soybean breeder at the University of Arkansas System Division of Agriculture, discusses traits of the UA5814HP variety of conventional soybean he developed during a field day in Desha County, where the first fields of the bean are being grown in real-world conditions. (Photo by Ryan McGeeney.)

Chen said growers must typically make a trade-off between high protein content and high yield in soybeans. The new variety was developed with an eye toward achieving both, he said.

“We were able to change the genetic makeup to increase the protein concentration without negatively impacting the yield, so farmers can grow this soybean variety without any risk,” Chen said. “So they’ll be able to market it at a better price, with a better premium, and make a higher profit.  Hopefully, it’s going to be a win-win situation for our producers.”

Earlier this year, Jason Smith, who farms more than 3,500 acres near Back Gate, a community a few miles east of Dumas, applied to plant and grow the variety’s inaugural crop in “real-world” conditions.

Approximately 2,750 of those acres are allocated for conventional soybeans, making Smith a good fit for giving the newly-developed bean its first real-world trial, Ashlock said. The non-GMO nature of the bean offers producers the chance to meet a growing demand in the marketplace for conventional crops, he said.

“This is an attribute our livestock industry is interested in,” Ashlock said. “Historically, when you increase proteins, sometimes you decrease yields. But he was able to capture both the increase of the protein content without sacrificing yield, so we’re very excited about this new, high-protein variety.”

Although still months away from harvest, Smith said the bean variety appears to have stood up well to weather and other environmental pressures.

“The proof is in the pudding,” he said. “When the combine goes through, I guess we’ll see what the bean is going to do.”

To learn more about conventional soybeans and other crops, contact your Cooperative Extension Agent or visit www.uaex.uada.edu.