FAYETTEVILLE, Ark. – A rare freshwater mollusk that lives in the Illinois River is one of 36 reasons Arkansas landowners need to study what’s covered under the federal Endangered Species Act, according an attorney with the National Agricultural Law Center. 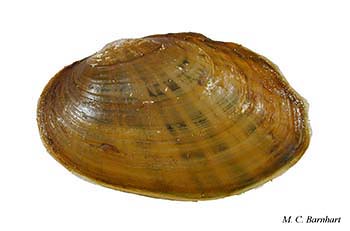 “It’s probably not an everyday topic in Arkansas, but it’s coming,” said Rusty Rumley, a staff attorney for the law center, a unit of the University of Arkansas System Division of Agriculture.

“A lot of the litigation and action is happening primarily in the western U.S.,” he said. “But we’re starting to see a move further and further east. We’re going to start hearing more about it. The Endangered Species Act, as it’s written, is a powerful environmental law and the agencies have a lot of authority under it.”

Landowners in western states tend to be more aware of the Endangered Species Act because of the number of protected species, he said. California, for example, has 291 on the list. Arkansas has 36. Those 36 – 31 animals, five plants – can be found at http://www.fws.gov/endangered with a drop-down menu that also shows the lists for other states. Since 1973, the nationwide list of endangered and threatened species has grown to 2,000.

Animals have broader protection under the law than plants, Rumley said noting that plants are usually protected if they are on federal land. The law’s impact on agriculture comes primarily from its application to animal species.

“Water quality has been determined as a factor in helping that species ‘recover’,” Rumley said. “Point-source pollution is regulated but non-point source pollution – which is typically going to be things like agricultural runoff, forestry operations, ATV use, etc. – isn’t as heavily regulated. So people may start looking at how do we control some of the sediment, fertilizer runoff or other activities that may be impairing water quality.

“Even if an operation is in full compliance with other environmental laws, such as the Clean Water Act, it does not mean that their activities may not cause a ‘take’ under the Endangered Species Act.”

If producers conduct agricultural activity in the critical habitat area, they have to be careful not to “take” the protected species, which the law defines as any act to harass, harm, pursue, hunt, shoot, wound, kill, trap, capture or collect the species. An illegal “take” can result in criminal or civil penalties.

One way a private entity can avoid trouble is to apply for an incidental take permit before beginning a project that might result in the take of an endangered species. Rumley said such permits protect the applicant in cases of accidental harm or death of a listed species. Applicants must submit a wildlife conservation plan showing how they intend to minimize and mitigate harm to the species.

Another option is a safe harbor agreement. Rumley described such an agreement as one in which the farmer offers to build a habitat that will benefit the endangered animal and in return the government allows the farmer a pre-determined number of future “takes.”

Getting back to the Neosho mucket, Rumley offered some examples of how the law could work.

What’s a good way for producer to avoid problems before they happen? It’s possible to visit a lawyer to discuss potential situations, but that costs money. Rumley said that farmers should at least be familiar with the endangered species in their area and find out what the Fish and Wildlife Service has determined to be critical habitats nearby. Then, try not to modify those habitats.

“Each of the species have different requirements as to what is and is not critical habitat,” Rumley said. “What a mussel needs to survive will be very different than what a bird, an insect or an amphibian will require. When you’re out and about, if you see something that looks like one of the species found in your area then leave it alone.”