With the Rains Come Worm Warning for Sheep and Goat Producers 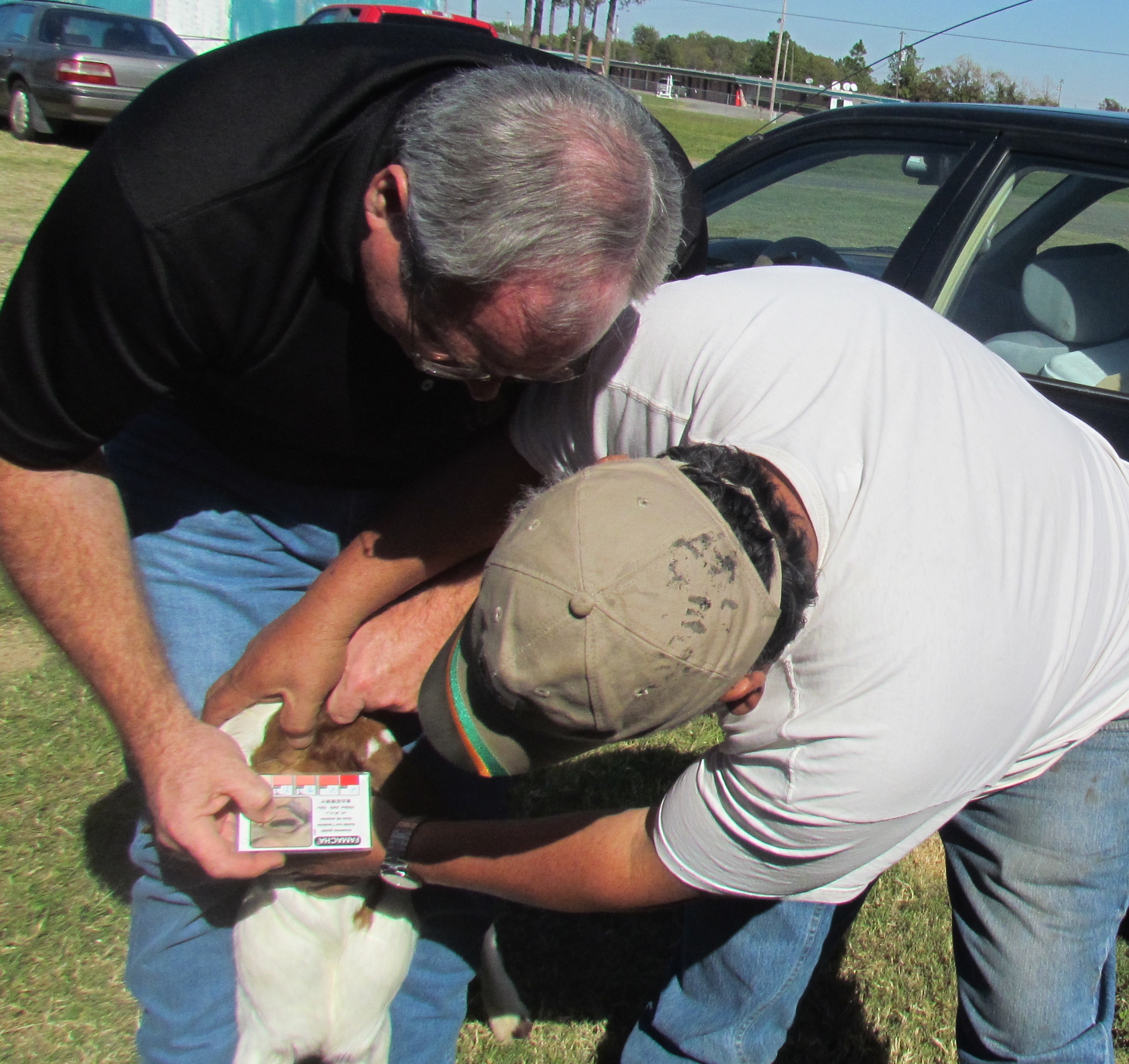 Comparing the color of the conjunctiva of the eye to a FAMACHA card is an easy and effective tool for detecting anemia that may be caused by barber pole worms. (Image courtesy Carol Sanders.) Credit mandatory.

The dry summer aided sheep and goat producers by keeping barber pole worm hatching and survival down. Unlike the droughts of 2012-2013, summer temperatures did not reach scorching levels that would likely kill barber pole worm eggs and larvae in the manure pellets. Instead, they have remained dormant and protected.

“Now that the rains have come and the manure is beginning to break down, the eggs can hatch and the larvae can mature into the infective stage,” said Dr. Fernandez.

Given the high manure loads on pastures after the dry summer, look for a bumper crop of worms this fall, he said. Under optimum conditions barber pole larvae can be ready to infect sheep and goats in less than a week after hatching.

Because most pastures have been grazed short, livestock will likely encounter barber pole worm larvae as they graze closer to the ground, said Dr. Fernandez. Once consumed, the barber pole worm completes its development and begins laying more eggs within 21 days.

Scours, anemia and unthriftiness are common signs of heavy internal parasite infestation. In sheep and goats, “bottle jaw,” swelling under the jaw caused by fluid escaping from the blood vessels, is a serious indicator of barber pole worm infestation. Unfortunately, many of the dewormers used against barber pole worms are becoming ineffective, said Dr. Fernandez.

Small ruminant producers can use the FAMACHA method as a quick and easy way to check livestock for anemia. The color of the conjunctiva of the eye, the red tissue that surrounds the eye beneath the eyelid, is compared to a color chart which provides a score. The score is an indirect measurement of anemia. Remember, that while the barber pole worm is the most common cause of anemia in sheep and goats, it is only one of several causes.

Fecal egg counts provide a more direct measure of the parasite burden. As parasite numbers increase, so does the number of eggs shed in the manure. A fact sheet found online at http://www.uaex.uada.edu/publications/pdf/fsa-9608.pdf can help you conduct fecal egg counts. Only about 20 percent of your animals will be responsible for shedding 80 percent of the parasite eggs on pastures. Fecal egg counts take more time and labor, and every animal must be checked, thus making the procedure uneconomical for larger operations.

For more information about this or other livestock-related questions, contact Dr. Fernandez at (870) 575-7214 or fernandezd@uapb.edu.