FAYETTEVILLE, Ark. — Some winged ghosts of this Halloween season may return to haunt Arkansas’ air next spring.

A massive outbreak of fall webworms has mummified trees and generally made a big, spooky mess in many Arkansas yards and forests. Entomologist Don Steinkraus said those caterpillars are tucked into cocoons now and might explode around May into swarms of ghostly white moths determined to mate and repeat their ghoulish attacks on the pecan, sweet gum and other trees in your neighborhood. 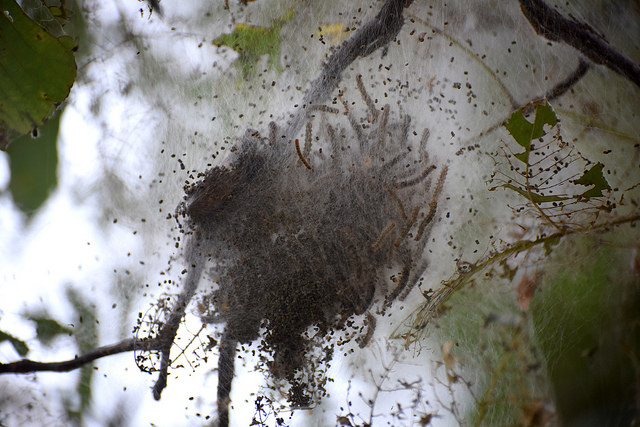 Steinkraus said he’s never seen such a large outbreak of the fall pests in his 26 years with the University of Arkansas System Division of Agriculture.

“Normally, fall webworms are in low densities, maybe one tent per tree, or two tents per tree,” Steinkraus said. “But this year, entire trees are covered with the tents of the fall webworm.”

“A lot of years there will be some sort of a problem that comes and really gets people excited,” Mays said, “and this year it has been fall webworms.”

The insect, known to entomologists as Hyphantria cunea, is native to the entire United States, Steinkraus said. They hatch from eggs laid by the adult moth of the species. The caterpillars begin spinning the webs immediately upon hatching as protection against their many predators, including birds, parasitic wasps, flies and others. They live communally within the webs and defoliate tree limbs by feeding on the leaves.

The species typically produces two generations each year, with the first hatching out around July and the second, often, larger hatch occurring in the fall.

Steinkraus said the outbreak has affected Kansas and Oklahoma as well as Arkansas. Mays said northwest Arkansas seems to be hit harder than other parts of the state, though the outbreak has been noted statewide.

Steinkraus said it’s not known why this fall’s generation is so large.

“Usually, insects are controlled by the environment or by natural enemies,” Steinkraus said. “Something has changed this year that has allowed the webworms to increase beyond what they normally do.”

Steinkraus said the caterpillar’s natural enemies might not be feeding as actively as normal, or perhaps temperature or rainfall patterns have favored them in some way.

By now, Steinkraus said, the webworms are finished feeding and lying dormant in cocoons located underground or in leaf litter. He said his concern is that this year’s large population of caterpillars will emerge as a massive outbreak of moths in the spring. Each female can lay 200 to 1,000 eggs and, in such large numbers, those could continue or even expand the outbreak into next year.

Because the heavier defoliation takes place in the fall, Mays said, healthy trees are not normally damaged permanently by webworms. Provided they receive adequate rain in the spring, the trees usually leaf out and remain healthy. But the 2015 fall webworm outbreak has not been normal, and both Mays and Steinkraus expressed concerns for what it will mean to the trees.

Normal webworm populations typically tent and defoliate no more than one or two limbs on a tree, but this year, the pests’ webs have covered entire trees. A drought in the spring or the possibility of further outbreaks of webworms defoliating the trees multiple times could result in permanent damage.

Steinkraus said the best way to prevent damage is to take down webworm tents when found and kill the caterpillars manually, especially during the first generation in the summer. “The earlier the better,” he said.

Steinkraus is reluctant to make predictions about what will actually happen in the spring when the current webworms emerge as moths. Insect populations often explode in such outbreaks only to crash in subsequent years. Such cycles of peak and low population densities are common in the insect world and are controlled by too many environmental factors to anticipate, he said.