By Dave Edmark
U of A System Division of Agriculture

FAYETTEVILLE, Ark. – Observing that the challenge of feeding the world will require major efforts in coming years, U.S. Sen. John Boozman of Arkansas told a policy forum Oct. 12 that the University of Arkansas students at the event would share the burden of working on those issues. 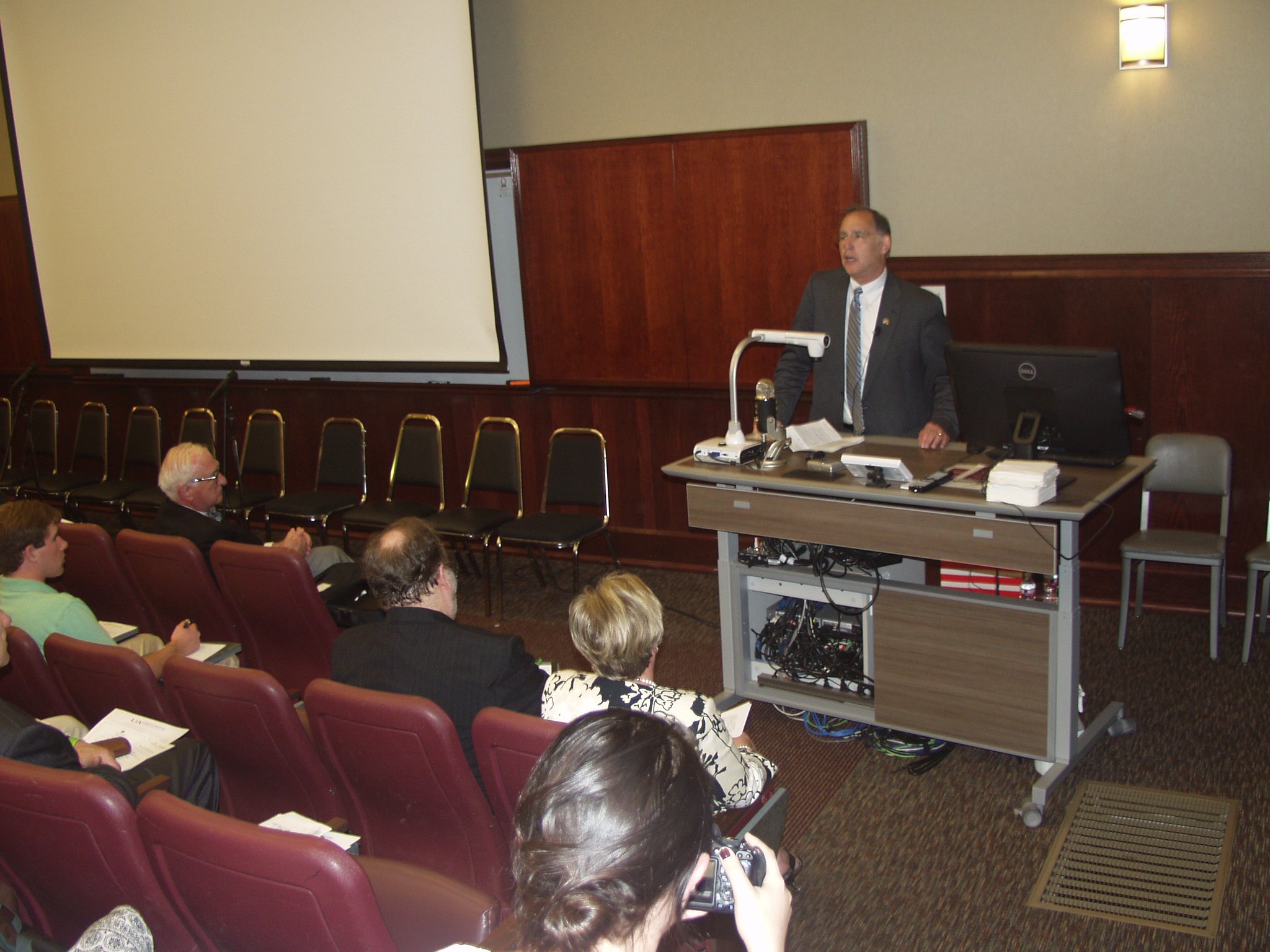 FOOD POLICY - U.S. Sen. John Boozman of Arkansas addresses the “Preparing for 21st Century Policy Choices” forum in Fayetteville. (U of A System Division of Agriculture photo by Dave Edmark)

Boozman delivered keynote remarks at the “Preparing for 21st Century Policy Choices” forum. The event was sponsored by the Farm Journal Foundation and the Department of Agricultural Economics and Agribusiness of the University of Arkansas System Division of Agriculture and the Dale Bumpers College of Agricultural, Food and Life Sciences.

“There are lots of different moving parts to this,” Boozman said. “We have the programs and we have in place certain policies. That’s why I want to thank you for having this kind of program so when you talk about all the moving parts that hopefully you can encourage these students to come up with some solutions.”

The event included the presentation of honors to two alumni of the department. Ed Fryar, a co-founder of Ozark Mountain Poultry in Rogers and a former professor in the department, received the 2015 Distinguished Alumnus Award. Nathan Reed, the owner and operator of Nathan B. Reed Farms and Eldon Reed Farms in Marianna, was recognized with the 2015 Young Alumnus award.

Improving global food security should be a U.S. priority because it is the right thing to do and it will create new market opportunities for American agriculture in the long run, said Stephanie Mercier, a senior policy and advocacy adviser for the Farm Journal Foundation.

Recognizing a U.S. tradition of aiding in world food relief dating back to World War I and including the Marshall Plan after World War II, Mercier noted that encouraging food security also promotes a more stable world. “The World Bank has done research that shows a country facing extreme poverty and hunger faces a much higher probability in any given year of seeing internal conflict erupt either in the form of a civil war or a military coup,” she said.

Mercier noted that the U.S. ability to help countries improve their economies has frequently led to the creation of new opportunities for U.S. exports. Fifty percent of U.S. agricultural exports go to developing countries, she said, and six of the world’s fastest growing economies are in sub-Saharan Africa.

“Over time, we know that a lot of the beneficiaries are agricultural systems that have now become significant commercial markets for U.S. food and agricultural exports,” she said. “These kinds of transitions do not happen overnight. They take decades sometimes.”

Mercier cited two nations that have realized major gains because of agricultural exports from the U.S. Guatemala experienced an approximately tenfold increase in agricultural imports from the U.S. between 1990 and 2014 with the value rising from $120 million to $1 billion. Corn, wheat and dairy exports were major components of the activity, she said, which would not have happened at that level without increasing demand in that part of the world and lower tariffs due to trade agreements.

Ghana has benefitted through the U.S. Department of Agriculture Food for Progress program to improve health and nutrition practices for more than 28,000 women and children in rural areas, and the Feed the Future program is helping farmers there obtain credit. Mercier said U.S. agricultural exports to Ghana have risen from $21 million to $168 million since 1990, largely from poultry, rice and wheat.

The U.S. private sector has also launched its own efforts. Mercier said the New Alliance for Food Security includes 120 companies spending $8 billion to build infrastructure and supply chains in Africa.

Fryar delivered remarks that warned of excessive government regulation of business, particularly when regulations change and alter the conditions in which businesses are accustomed to operating.

The slower growth of real per capita disposable personal income – income after taxes – since the low point of the recession in 2009 illustrates the problem, he said. The national real per capita disposable personal income is $37,000 today, but it would be about $40,000 if previous economic growth rates had stayed intact. “That affects everybody,” Fryar said. “Two percent growth in the economy versus 3 percent growth. Over time it just sneaks up on you.”

Businesses will need to adapt to changing regulatory conditions to stay competitive. Fryar said his company has increased compensation for tis employees. “We figured a few things out. I think we would be in even better shape today if things weren’t changing as much as they had.”

Fryar was optimistic about future prospects because bright people will work hard and surround themselves with good people. “They remind me a lot of the students in the room right now,” he said.

Other speakers who participated in a panel during the program were Boozman; Reed; Arkansas Secretary of Agriculture Wes Ward; Rodney Baker, Arkansas Farm Bureau executive vice president, and John Paul Pendergrass of Pendergrass Cattle Co. of Charleston. Their comments included these remarks:

Media Contact: Dave Edmark
U of A Division of Agriculture
501-479-6940
Dedmark@uark.edu