MONTICELLO, Ark. -- On a freezing February morning just after the end of duck season, Douglas Osborne and a handful of students are standing in the icy water of a duck hole, catching mallards and attaching uniquely numbered leg bands. 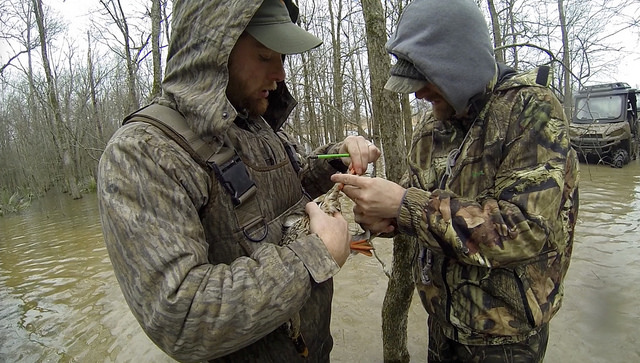 Come February 2016, he’ll be in the third year of a study to track return rates of banded mallards to the same wintering areas and measure survival rates of ducks that made it through the hunting season.

“Harvest rates are one of several factors that drive how we set harvest regulations for ducks,” Osborne said. “We’re potentially missing the mark by not banding waterfowl on the wintering grounds.”

Osborne’s research turns the usual banding practice on its head. Typically, duck banding programs focus on the breeding grounds in the prairie pothole of northern Midwest and the Canadian Prairies, not where they winter.

“They’re banding a lot of juveniles; birds that just hatched that year,” he said. “They’re generally more susceptible to harvest and estimates of harvest rate based solely on banding programs on the breeding grounds may be biased high. We continuously strive to improve our understanding of survival rates, and this winter mallard banding program will likely help meet that goal.”

After the bands are applied, Osborne gets help from duck hunters and the U.S. Geological Survey. USGS coordinates the North American Bird Banding Program jointly with the Canadian Wildlife Service.

Hunters collect the bands from harvested ducks and are encouraged to report the nine-digit band numbers to the USGS through a toll-free number or through the web at www.reportband.gov. Osborne said about 60 to 80 percent of hunters take the time to do the reporting. As each is reported, Osborne gets an email from USGS.

“Hunters typically want to know where their birds are coming from,” he said. “They’re getting better at submitting the data and the process is easier now than ever before.”

The crux of this research will be getting “a good data set, to come up with an improved estimate of survival for this cohort of birds that make it through the hunting seasons. I’ll do comparisons of how the data differs from those birds banded on the breeding grounds,” Osborne said.  If there are differences, regulatory agencies may see use for his data to refine their survival models, ultimately informing the decision-making process, used in for setting harvest regulations.

Osborne’s research is being funded by private sources including Maxwell’s Hardwood Flooring in Monticello, among others.

“Landowners are interested in learning if the birds are coming back to the same wintering areas year after year and there is a community of folks who have chipped in money,” he said. “They want to see a successful waterfowl research program here in the state of Arkansas.”

Osborne is also looking at levels of environmental mercury in the blood and feathers of mallards captured, banded and released.

Mercury in the blood of wintering ducks indicates exposure to contaminated water in the previous 20-30 days in the wintering grounds, he said. Samples are sent to the Biodiversity Research Institute in Maine for processing. While the samples have turned up low levels of mercury. However, none of the levels “have alarmed us yet,” he said.

The federal Environmental Protection Agency sets threshold levels of mercury accumulation in fish that are potentially harmful when consumed. When levels go above a particular concentration, anglers are asked to stop or curtail consumption of those fish.

“The levels we have found in mallards do not exceed the health standards that they put on fish,” he said.

About the Arkansas Forest Resources Center