Researchers, students and growers make full use of college greenhouse in Harrison
skip to main content
2015

HARRISON, Ark. – A new greenhouse at North Arkansas College is growing more than berries these days. It’s serving as a venue for research by the University of Arkansas System Division of Agriculture, a place for local growers to experiment through the Cooperative Extension Service and a lab for students at the two-year public college. 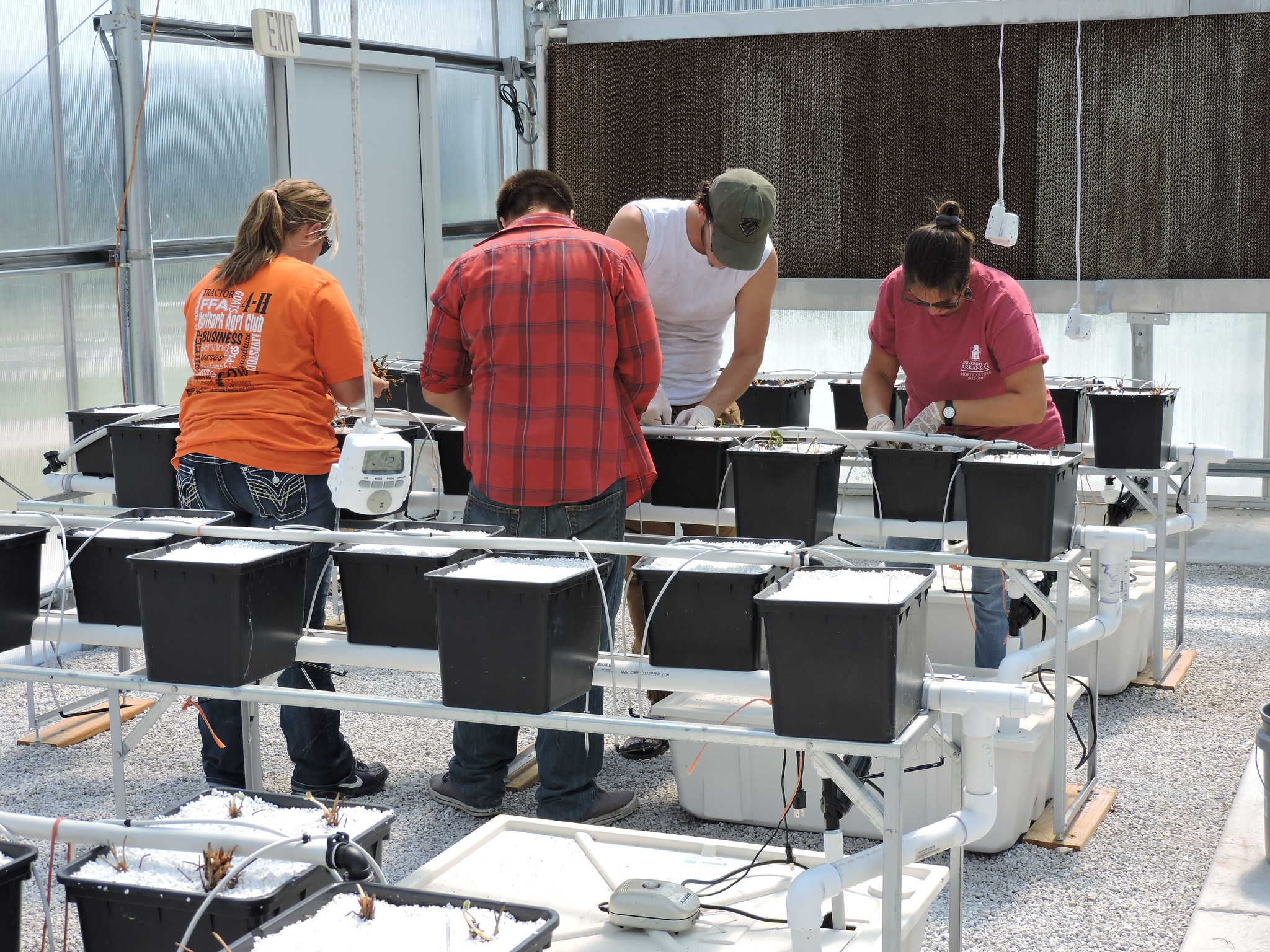 LEARNING TO GROW - Students at North Arkansas College greenhouse plant strawberry crowns into Dutch buckets with a perlite growing medium. From left are Emilee Tucker and Dustin Lum, both Northark students, and Preston Smith and Hannah Quick, both University of Arkansas students. (U of A System Division of Agriculture photo)

When the 96-by-30-foot facility opened in September 2014, it immediately housed strawberries being grown for the Division of Agriculture as part of the National Sustainable Strawberry Initiative, a Walmart-supported project. It’s been a busy place ever since.

“We worked with (Northark agriculture instructor) Matt Shekels on its initial design and on the kinds of things they wanted to make sure they incorporated to be successful,” said Michael Evans, a Division of Agriculture horticulture professor who is currently using the facility to research the feasibility of raising blackberries in greenhouses during winter months.

Evans travels to Harrison on Tuesdays and Thursdays to coincide with the class schedule of Northark students who work with him on his projects. “We are doing things like planting strawberries, checking nutrient solutions or releasing predators for pest control,” he said. “The students can come out and help us and give us hands to help get the job done. But also since they’re actively working with us, then they are also learning and that becomes an actual applicable living lab for the students involved.”

“It’s been very beneficial,” Shekels said. “Beyond the research and information, it’s brought a higher level of respect to our program.”

The greenhouse and its link to Division of Agriculture research has also resulted in benefits for commercial horticulture in Boone County, said Mike McClintock, the Boone County extension agent. He coordinates a local commercial horticulture group that meets regularly to discuss options for growing the industry. The greenhouse and high tunnel at Northark, just next door to the extension service office, has been a place for compiling production data that the growers use. 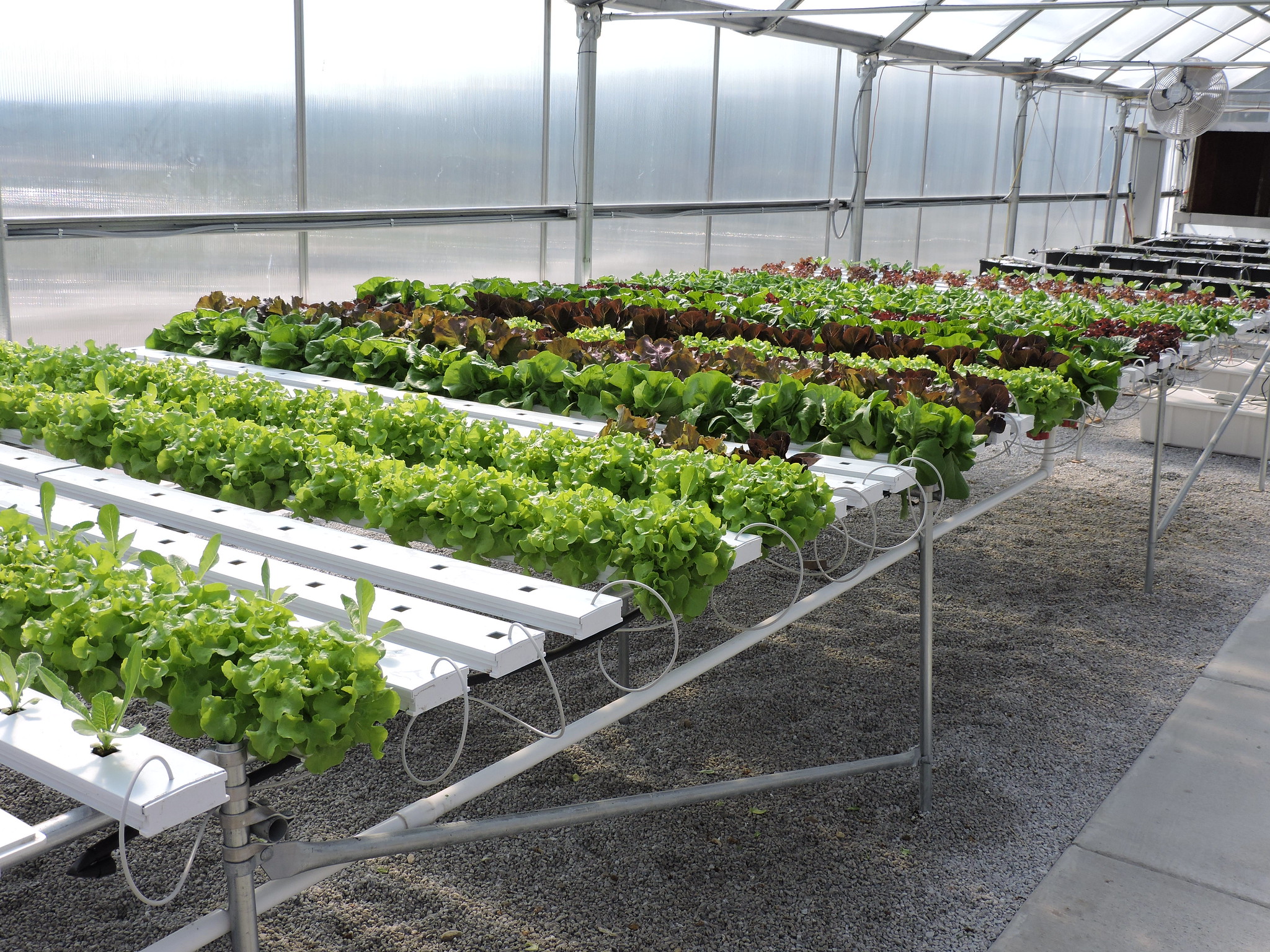 ROWS -- Berries growing at the North Arkansas College greenhouse. (U of A System Division of Agriculture photo)

“We’ve had a local grower growing different varieties of strawberries” McClintock said. “Some varieties have different peculiarities when you put them in the high tunnel. Some do well and some don’t. Growers had to learn to identify what things work and learn different production methods.”

McClintock will take on more greenhouse-generated responsibilities next spring when Evans’ blackberry project will include a food crop production short course and field day to be coordinated by the Boone County extension service. McClintock will organize the programming for the event, which is planned for each spring during the next three years.

“We would basically be developing a system where growers could go into a greenhouse and have these fruiting during the winter months when prices are high and they don’t have a lot of other production in the fields,” Evans said, adding that there could be demand from restaurants, grocery stores and winter farmers markets.

Evans is working with blackberries from the Division of Agriculture’s breeding program, Ark 45 and Ark Freedom, both primocanes developed by professor John Clark. Ark 45 is thorny and Ark Freedom is thornless.

“Having these in the greenhouse, you’d rather have thornless if that works,” Evans said. “But you want to look at both of them to see if there’s a difference in fruit quality and in production levels.”

The greenhouse makes possible the collaborative partnership between Northark and the Division of Agriculture’s research operations and the Division’s extension office in Boone County. “At the North Arkansas College location we have developed a small center where we are conducting research and teaching students and growers how to grow fresh greens, herbs and strawberries in greenhouses,” Evans said. “We hope to continue and expand these cooperative research and outreach efforts.”