Bourland named to Cotton Research and Promotion Hall of Fame

KEISER, Ark. – Fred Bourland, a cotton breeder for the University of Arkansas System Division of Agriculture, will be inducted by Cotton Incorporated into the 2015 class of the Cotton Research and Promotion Hall of Fame. Bourland, director of the division’s Northeast Research and Extension Center in Keiser, will be honored with four other inductees in December. 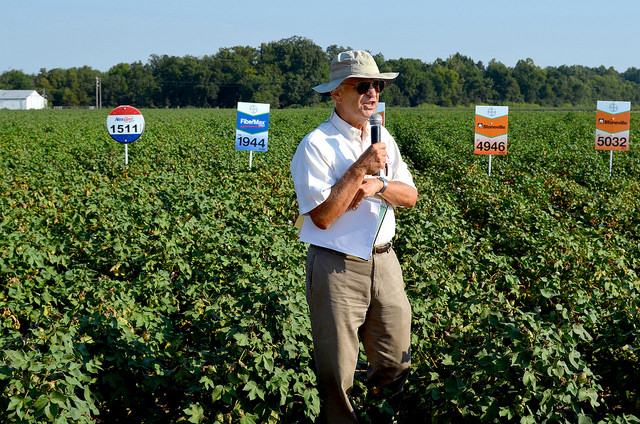 This is the second year that the organization has recognized cotton industry leaders who have made significant contributions to its research and promotion program or to the cotton industry in general.

Cotton Incorporated acknowledged Bourland for his extensive contributions to U.S. cotton plant breeding. In a career spanning more than 40 years, Bourland developed valuable plant measurements and techniques that aided the release of more than 85 cotton lines (germplasm and cultivars).“The cotton industry as we know it today was shaped by innovative thinking and strong leadership,” said Berrye Worsham, president and CEO of Cotton Incorporated. “The 2015 Hall of Fame inductees embody these attributes, and their contributions have had a lasting impact on the industry.”

“I am overwhelmed to be included among these inductees,” Bourland said. “My achievements are the accumulative results of collaboration with other researchers, assistance of station personnel and students, support from Cotton Incorporated and other institutions, and strong work ethics and Christian values taught by my family.”

Bourland came to the Division of Agriculture in 1988 after leading a cotton breeding program for 10 years at Mississippi State University. He continued his cotton breeding program at the Fayetteville campus and at the division’s research stations in eastern Arkansas. In 1997, he moved to his current position at the Northeast Research and Extension Center.

Under Bourland’s direction, the Arkansas breeding program has focused on developing improved yield, fiber quality, pest resistance and early maturity. In recent years, his program has focused on characterizing plant hairs on various plant parts, breaking the negative relationship between high yield and high fiber quality and on identifying lines that produce yield more efficiently via consideration of yield components. His research has also encouraged private breeding programs to utilize and improve these traits.

Bourland was one of the principle developers of the COTMAN cotton management program that is widely used today in Arkansas and neighboring states. A multi-disciplinary research team developed the system that monitors and responds to plant growth and development to help growers with end-of-season management decisions.

Bourland initially worked on developing critical plant measurements and determining how different varieties differed during development. After the COTMAN system was released, he has been involved in training individuals to use COTMAN and instrumental in developing training materials.