LITTLE ROCK -- A dry spell that’s turned parts of Arkansas from flood to drought is giving just-planted winter forages a slow start, which may mean livestock growers will have to feed more hay this winter, said Tom Troxel, associate head-Animal Science, for the University of Arkansas System Division of Agriculture. 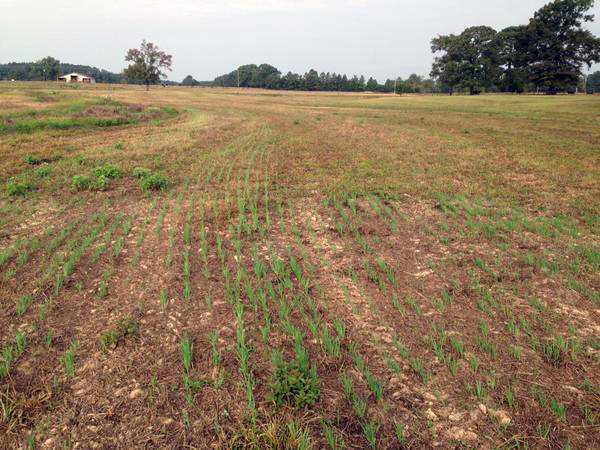 RECOVERY FIELD -- Young plants dot a research field planted to observe the re-establishment of forage in a field covered by water in spring 2015.  The Perry County field is planted in cool-season forages as part of the 300 Days Grazing research. (U of Arkansas System Division of Agriculture photo by Jesse Bocksnick)  Credit mandatory.

According to the U.S. Drought Monitor’s Sept. 22 map, a little more than 50 percent of Arkansas had a drought rating of some kind, most of it in the southern half of the state. The most intensively dry areas are in Little River, Columbia and Union counties. Little River was one of the areas most affected by spring floods.

The National Weather Service reported that Little Rock was having its driest September ever, with just .12 inches of rain reported through Monday.

“Even if Little Rock was to receive just 0.14 inches of rain before the end of the month, it would still be the driest September since 1917, and the driest on record,” the weather service said.

Troxel said that last year, “we had an extremely dry fall through winter and we’re setting up for the same kind of weather pattern so far, but the National Weather Service is talking about a strong El Nino giving us a wetter than normal and warmer than normal winter.”

September and October is generally when livestock producers plant winter annuals to give their animals cool-season grazing.

“At the Batesville Station, winter wheat is up about a half an inch and is looking for rain,” he said.

If those winter annuals aren’t available for grazing, livestock producers will have to resort to feeding hay harvested earlier in the year, and they may have to feed that hay earlier than planned.

“They should have plenty of hay from spring,” Troxel said, however, “because of the tremendous amount of rain this spring, many were unable to harvest that hay crop in a timely manner to get a high quality of hay they’d normally harvest.

“It’s going to be important to forage test that hay this winter, especially if we don’t get some fall pastures going,” he said.

For more information about forages, contact your county extension office or visit www.uaex.uada.edu.