Cooking lessons for the scientists: flames in the air and chocolate eclair
skip to main content
2015

Cooking lessons for the scientists: flames in the air and chocolate eclair

FAYETTEVILLE, Ark. — Three times a year food scientists from the nation’s leading food processors come to Fayetteville and learn how to cook. But there’s more to it than that. 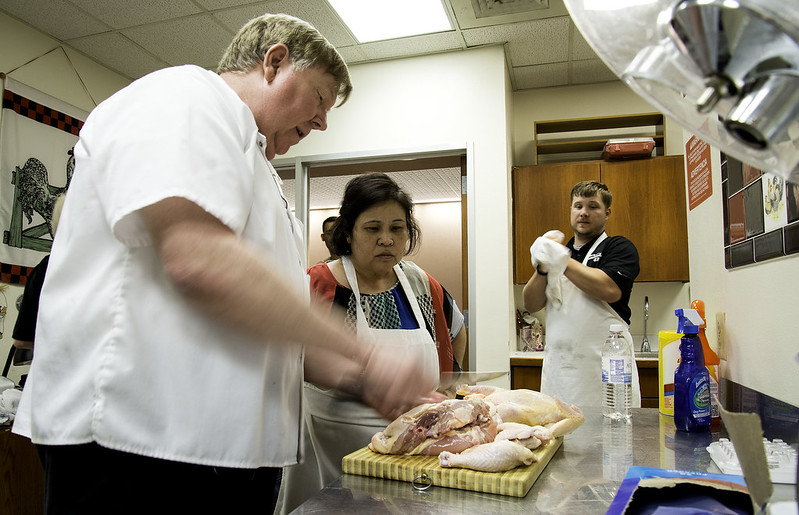 They come to the campus where extension food scientist John Marcy of the University of Arkansas System Division of Agriculture teaches weeklong classes that will qualify them to take the national exam they must pass to be recognized by the Research Chefs Association as certified culinary scientists.

“They are creative folks,” Marcy said. “A lot of them come from seasoning companies, flavor companies, meat and poultry companies, vegetable companies, bakeries, across the board. They’re usually the larger companies with the larger research and development budgets.”

As food scientists working for major firms, they might spend more time in labs than in kitchens. But the kitchen is still an important component of their work and the place where a company’s research chefs will implement the scientists’ findings. It helps for the scientists to be acquainted with how the chefs develop their products.

On top of that, Marcy noted, “most food scientists are foodies” and they enjoy the time away from their work setting to exercise their creativity. The instruction by Marcy and Fayetteville chef Suzie Stephens includes how to prepare several high-end dishes including pastries, crème brulée, chocolate eclairs, Steak Diane, pappardelle with lamb ragout and more. It follows a curriculum in a textbook, “On Cooking,” on which they’ll be tested for their certification.

The food technologists who attend the classes are already skilled in science of food. “It’s the science of getting from the farm to the table,” Marcy explained. “After World War II and the advent of modern food processing, the science built up with the engineering, the chemistry and the microbiology. It’s all about getting food to the table in a much larger distribution system than what we used to do.”

The food scientists are expected in their jobs to work with chefs and understand how to develop flavors and get the textures right. Research chefs organized to build their own skills and blend food science with the culinary arts. The classes in Fayetteville reflect that nationwide effort.

“This is hands-on cooking supervised by a chef and a food scientist. They actually develop a lot of skills, including skills to help them with presentation,” Marcy said. “When they go back and demonstrate to their customers, they’re not likely to put out a plate with toothpicks. They’re actually going to do it in a sandwich or they’ll do it in an appetizer. They’ll make sure the plate looks good. The presentation means a lot. They require a lot of culinary skills and a lot of confidence.”

Marcy has been leading the class since 2005, when it started as a partnership between the Division of Agriculture and Tyson Foods, which was developing its Discovery Center for research and development at its home offices in Springdale. Tyson now has about 50 certified culinary scientists who went through the classes. In recent years the program was opened to food scientists beyond Tyson with room for about nine people per class.

Joshua Shook, the innovation manager for the fresh meats division of Smithfield Foods in Virginia, is one of those who has taken advantage of the classes. With a doctorate in food science and meat science, he fits a typical profile for many of those attending the class. He went through the baking fundamentals course in March and returned in May for the culinary arts course. He’s the first from Smithfield employee to attend after hearing about it from a company chef.

“He highly recommended those of us who had a science background to come and take these culinary classes to broaden our skill set,” Shook said. “Our company has become more interested in making sure that we are science focused but that we also have a culinary background as well. That bridges the gap and we talk to our consumers and our customers better that way.”

Before the week was over during his culinary arts training, Shook was working on a Steak Diane recipe complete with flames shooting from the pan into the air. By then he had been through training in knife skills for chopping and dicing, a review of classic French cuisines and development of the five mother sauces, the base flavors for several different finishing sauces for proteins such as beef, pork, chicken and lamb.

“Occasionally as we go they get to pick things that they’re going to cook,” Marcy said. “It’s not all prescribed to them so we give them a lot of freedom to exercise their creativity.”

News releases and photos are available online at
https://arkansas-ag-news.uark.edu/News.aspx

culinary program50.jpg
Steak Diane is one of the high points of an extension culinary arts class offered by the University of Arkansas System Division of Agriculture.


Media Contact: Dave Edmark
U of A System Division of Agriculture
479-575-6940
dedmark@uark.edu