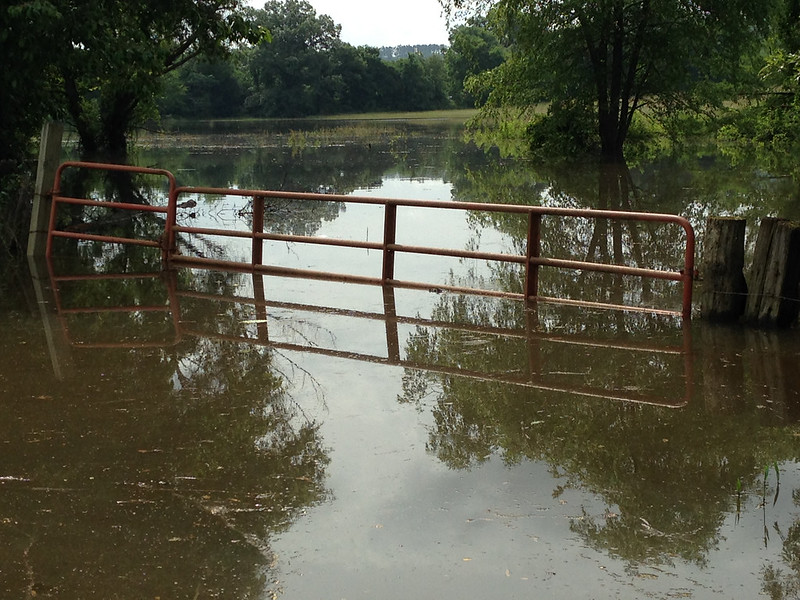 NO ENTRY -- Fourche LaFave River climbs up into a Perryville, Arkansas, farm.  On a normal day, the river isn't even visible from the farm. (University of Arkansas System Division of Agriculture image by Jesse Bocksnick)

Lance Kirkpatrick, Cooperative Extension Service staff chair for the Sebastian County office, said Tuesday that standing water in flooded areas of both Sebastian and Crawford counties were higher and more widespread than local residents had seen in more than 30 years.

“If you can be more than 100 percent saturated, we’re there,” Kirkpatrick said. “There’s water in areas where it has not been in a long, long time.”

Storms that brought in torrential rains over the Memorial Day weekend were only the latest in a wet spring that continually pushed back planting for wheat, grains and other row crops, and has indefinitely delayed first cuttings of hay.

Kirkpatrick said that the timing now places Sebastian County growers in a “no man’s land” of planting. If predicted rains fall again this weekend, farmland probably won’t dry enough for planting until the second or third week of June. Approaching July and its summertime temperatures, there likely won’t be adequate rainfall for non-irrigated crops, he said.

“With corn, you just can’t plant it that late,” Kirkpatrick said. “You get it in the ground, and then you’ve got to get enough rainfall on it to get it up and producing, and it’s going to be pollinating right there in the heat of the summer, without any rainfall — that just makes for a disaster.

“Soybeans, you could roll the dice on those, but the bigger problem you run into is, if you don’t get them to make in time, then you get frost on them later on in the year,” he said. “It’s a ‘catch-22.’”

Kirkpatrick said that any hay that can eventually be harvested will be of “substantially diminished quality.”

According to the 2012 U.S. Department of Agriculture Census of Agriculture for Sebastian County, about 43 percent of farm land in Sebastian County is dedicated to pasture and another 30 percent is used for crops. About 28,600 acres are considered forage land; more than 2,700 acres are used for soybeans or other beans, while about 408 acres were allocated for winter wheat.

Kirkpatrick said many Sebastian County growers will have to rely on crop insurance to offset planting costs, and will simply face “a year without profit.”

Residents of Howard, Hempstead and Pike counties are eligible for individual assistance, Guthrie said. Damage assessments for the 17 counties are scheduled to begin June 28.

Joy West, interim Cooperative Extension Service staff chair in Yell County, said creeks throughout the area have remained flooded since storms brought water over banks more than two weeks ago. She said cattle producers in the county have kept their herds at higher grounds during that period.

“They were scrambling that Monday to bring all their cattle up, and they haven’t been able to bring them back down yet, because the water isn’t really going down,” West said.

“Ninety percent of the hay’s going to be reduced quality — it should have been cut two weeks ago, but nobody’s been able to cut it,” Harper said. “Ordinarily, that grass would’ve already been growing for two weeks by now, and be ready to cut in 3-4 weeks. But we’re still two weeks out from it being cut the first time.”

Too early to count losses

Brad Watkins, a professor of agricultural economics for the University of Arkansas System Division of Agriculture, said it was too early to calculate total losses in crop yields, quality or revenue.

“Growers have had a very narrow window for planting rice between rains,” Watkins said. “Normally, you want to stagger your planting, so that everything doesn’t all come up at once. That could cause problems in terms of lost quality — if it’s ready to harvest, and you can’t get to it in time, you lose quality and value.”

As the season moves on, later planting means less exposure to the sun throughout the remainder of the growing season, Watkins said, which typically means lower yields, particularly in grain, Watkins said.

Jarrod Hardke, extension rice agronomist for the University of Arkansas System Division of Agriculture, described recent history of weather and agriculture in Arkansas as “a tale of two cities.”

“The southern half of the state gets one set of weather events, and the northern half gets another,” Hardke said. “It’s never consistent across the board.”

He said most of the severe weather events this spring have steered clear of the eastern half of the state, where most of the rice and soybeans are typically grown — although heavy rains did push rice plantings back until the final few weeks of the normal planting window.

“There wasn’t a ton of rice that went in the ground before the first week of may, when the vast majority of the rice planted north of I-40 all went in, in a 12- to 14-day period,” Hardke said. “Maybe as much as 75 percent of the rice north of I-40 went in in those 14 days.”

Hardke said that because 2015 has been such a strange year for weather and agriculture in Arkansas, normal benchmarks used to predict yields may not apply.

For more information about crop production contact your county extension office or visit www.uaex.uada.edu or http://arkansascrops.com.