JONESBORO, Ark. – Weather and declining prices are putting a dent in the expected total of rice and corn acres planted, said Scott Stiles, extension economist for the University of Arkansas System Division of Agriculture.

Meanwhile, rice growers are bumping up against insurance deadlines for planting. 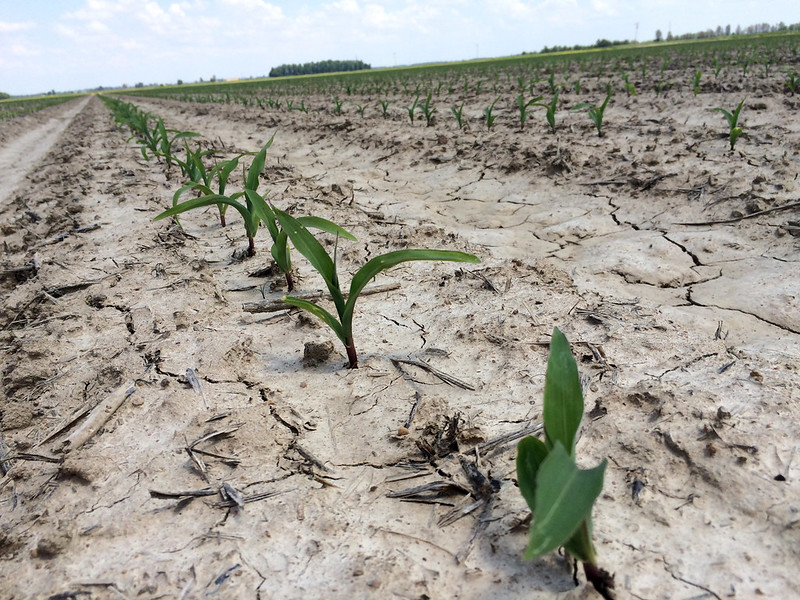 Young corn in verification plot in Clay County, Arkansas. Taken May 5, 2015. (U of Arkansas System Division of Agriculture photo by Kevin Lawson)

The Risk Management Agency of the U.S. Agriculture Department pegs the final planting date for rice at May 25.

For growers, “your prevented planting coverage is 45 percent of your production guarantee for timely planted acreage,” he said.

Rice was 89 percent planted for the week ending May 17, according to the National Agricultural Statistics Service. That’s ahead of the 85 percent five-year average.

Corn was 98 percent planted, right on the five-year average.

In Arkansas, “there are two factors at work that have reduced acreage: weather and price. Weather is likely the dominant factor,” Stiles said. “At the end of March we only had 2 percent of the corn in the ground. Roughly 85 percent of corn was planted in April.

September futures prices slipped 20 cents in April, “but, I think the calendar was more of a factor in any acreage reduction,” he said.

The National Agricultural Statistics Service “indicated we didn't have any rice planted by March 29 and only 37 percent planted by April 26,” Stiles said, which means that “two-thirds will go in the ground in May and we certainly hope planting doesn't extend into June.”

He said that rice prices relative to everything else won't encourage growers to plant rice extremely late. “Given the weather delays thus far and severe price collapse, it seems very like some of the intended rice acres will switch to soybeans or remain fallow,” Stiles said.

NASS issues its annual “Acreage Report” on June 30, reflecting a producer survey of planted acres around the United States. The survey period is during the first two weeks of June.

Arkansas Cooperative Extension Service is an equal opportunity/equal access/affirmative action institution. If you require a reasonable accommodation to participate or need materials in another format, please contact your County Extension office (or other appropriate office) as soon as possible. Dial 711 for Arkansas Relay.