CLARKSVILLE, Ark. -- The recent onslaught of spring rains across Arkansas is having its effects on the summer fruit crop, and not all the effects are good. Damage and disease have hit some berries and peaches. The famed Hope area watermelons will be delayed because of the weather. 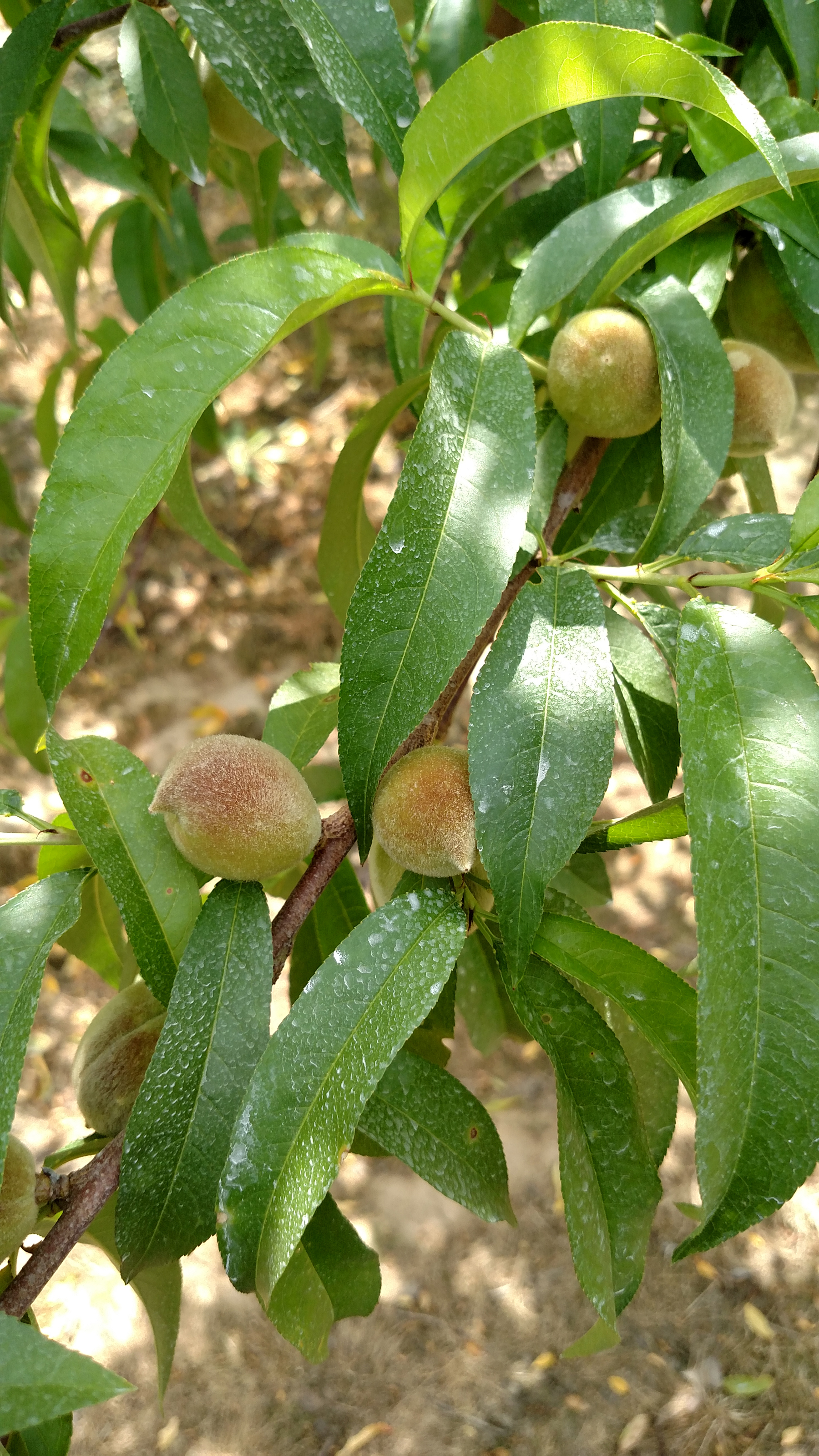 A FEW MORE WEEKS -- Peaches growing in Cross County, Arkansas, are benefiting from the spring rain. Image taken May 12, 2015. (U of Arkansas System Division of Agriculture photo by Rick Wimberley)

“The problem with this rain was not only the amount but the constant raining, which will cause disease problems,” said Dan Chapman, resident director of the University of Arkansas System Division of Agriculture Fruit Research Station in Clarksville. “The large amount of rain and the constant rain or saturated soils can cause root rot too.”

Peaches in the Clarksville area are due to start ripening during the first week of June and continue with different varieties ripening through late August. Chapman said the large peach crop this year has sustained some damage from small hail but escaped frost damage over the winter.

The southwest Arkansas peach crop appears to be in good shape and also escaped frost damage, said Terry Kirkpatrick, a plant pathology professor at the Division’s Southwest Research and Extension Center in Hope. “The crop should be better than average if growers can keep their fungicide spray programs timely to help with brown rot and scab,” he added.

Chapman agreed, noting that there could be a problem just getting the fungicide sprayers into the orchards due to inclement weather amid the potential for fungal growth and fruit rot.

“It might be a couple of weeks before we know the full damage from this rain,” Chapman said.

In northeastern Arkansas, Cross County Extension Staff Chair Rick Wimberley said that in his county, “the peaches are growing and benefiting from spring rains.”

The blackberry and blueberry crop in the Arkansas River Valley is smaller than last year, Chapman said. Kirkpatrick noted that conditions for the berries look excellent in southwest Arkansas. The early southern highbush blueberry varieties and early blackberry varieties such as Natchez are about three weeks away from ripening and will be followed shortly by Ouachita and Osage.

Strawberries in the southern part of the state are maturing slowly because of the cool, cloudy weather after gray mold and other diseases have hit the crop. “An added disadvantage is that many of our fungicides are of limited effectiveness due to the presence of fungicide-resistant fungal strains,” Kirkpatrick said.

Grapes and muscadine are just starting to bloom, so it’s too soon to tell how they will do.

Growers in southwest Arkansas replanted watermelons after rain and cold weather took its toll, so the crop will be later coming in. “Those who planted on plastic-mulched beds have had better luck with plant survival and more normal growth and development,” Kirkpatrick said.

Arkansas fruits play a significant role in the state and national economy. The state is ranked 13th nationwide in both blueberry and grape production, 14th in watermelons and 23rd in peaches.

For more information on fruit production, contact your county extension office or visit www.uaex.uada.edu. To learn more about peaches see “Stone Fruit Production in the Home Garden,” downloadable at  http://www.uaex.uada.edu/publications/PDF/FSA-6060.pdf,