LONOKE — Residents throughout the eastern half of Arkansas are likely already hearing the creeping call of Brood XXIII, the cluster of cicada species emerging from a 13-year slumber to frenetically mate for the next three to four weeks before disappearing for another 13 years beneath the soil. 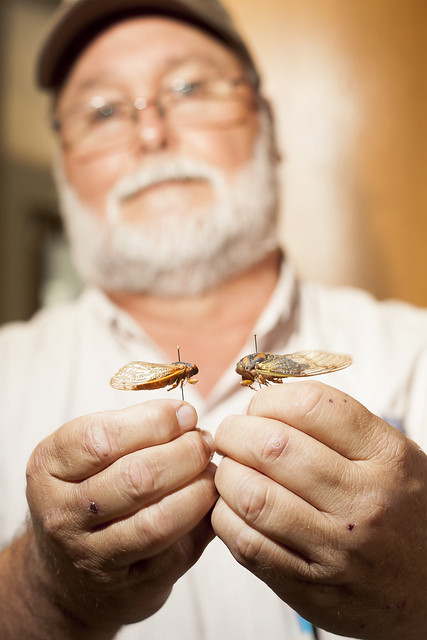 RYAN MCGEENEY / UNIVERSITY OF ARKANSAS SYSTEM DIVISION OF AGRICULTURE — 05/07/2015 — Gus Lorenz, extension entomologist for the University of Arkansas System Division of Agriculture, holds two cicada specimens: On the left is one of four specimens now emerging as part of Brood XXIII, which is currently emerging as part of a 13-year cycle. On the right is a Dog Day cicada, which emerges in Arkansas annually.

Gus Lorenz, extension entomologist for the University of Arkansas System Division of Agriculture in Lonoke, said that early May typically brings soil temperatures at a depth of 7-8 inches — where cicadas live most of their lives — just right for the insects emergence. Brood XXIII, also known as the Lower Mississippi Brood, involves four species of cicada, and is geographically associated with eastern Arkansas, northeastern Louisiana, most of Mississippi, western Tennessee, southeastern Missouri and the southern portions of Illinois and Indiana.

Most of cicadas’ existence takes place in wooded areas, making their chorus much more noticeable to people living in rural, wooded areas or at the edge of urban areas. As nymphs in the soil, the insects draw nutrients from the roots of plants or trees. During an emergence, male cicadas emerge first, forming “chorus centers,” which in turn attracts females.

Lorenz said the females use a saw like “ovipositor” to lay their fertilized eggs into the limbs of a tree. When the eggs reach the larval stage in August, they fall to the ground and burrow into the soil, and begin the years-long process again.

Not all cicadas are on a 13-year cycle, Lorenz said. Some species, such as the Dog Day Cicada, emerge in Arkansas each August. Others are on two- or four-year cycles.

The most curious of the broods, however, are on 13- or 17-year emergence cycles. Kimberly Smith, a professor of biological sciences at the University of Arkansas in Fayetteville, said 30 broods — 13 13-year broods and 17 17-year broods — were identified by Charles Lester Marlatt in 1907.

“He wrote the book on periodic cicadas more than 100 years ago, and it’s still sort of the bible on the insects,” Smith said. He said some researchers consider Marlatt’s identification of 30 broods arbitrary, and than some broods have since disappeared.

Smith said that two key mysteries still tied to cicadas. The first is a question of how the millions of insects in a brood that spans hundreds of miles all know to emerge at essentially the same time. He said it may be time to a chemical associated with the roots from which the cicadas draw their nutrients, but that there may also be an unexplained element of communication between the insects.

The second mystery is how or why many of the broods operate on 13- or 17-year cycles — a reliance on prime numbers unique in the natural world. Smith said whatever the reason, it has helped the insects survive.

The sheer numbers of near-simultaneously emerging cicadas — sometimes calculated at more than 1 million per acre — is another avenue of survival and species perpetuation, Lorenz said.

“It’s a method of self-preservation,” Lorenz said. “Some insects protect themselves by stinging, or with camouflage. Some of them lay thousands of eggs. In the case of the cicada, by all of them coming out at the same time, there are too many there for predators to eat them all.”

Lorenz said that doesn’t stop the rest of the natural world from trying.

“These things are pretty tasty to wildlife.,” he said. “Birds, coons, possums, all kinds of rodents.  We’ve seen in past emergences where they come out in such huge numbers, birds eat so many that they can’t even fly away.

“It’s a boon for wildlife. When this emergence occurs, it’s a really positive thing,” he said.

Smith added that the cicadas “are pretty good fish bait until the fish become satiated. Even copperhead snakes are attracted to the emergence.”

Smith said the phenomenon is described as “predator swamping” or “predator satiation.”

Lorenz and Smith said that although the insects — which should not be confused with locusts — will occasionally make their way into cotton or other crops if they’re planted near the edge of a heavily wooded area, they don’t constitute enough of a pest to warrant pesticide treatment. Smith said cicadas are often despised by peach growers, however, because the weight of cicada eggs at the ends of tree branches can cause leaves to brown and the ends of the branches to “flag” and droop or break off.