LITTLE ROCK — After weeks of lagging well behind the state’s five-year average in planting progress, Arkansas growers have finally pulled within a few percentage points of historic averages, according to a crop progress and condition report published Monday by the U.S. Department of Agriculture. 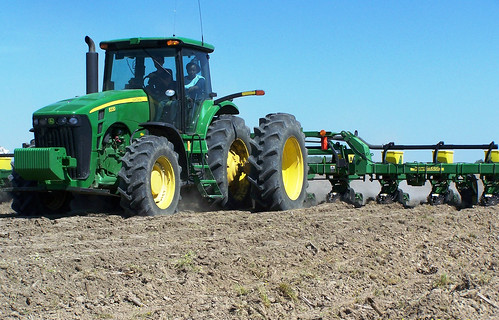 SEEDING -- Cotton seed going into the ground May 1, 2015, in Craighead County, Arkansas. U of Arkansas System Division of Agriculture photo by Scott Stiles.

According to the report, planted corn, cotton, rice, sorghum and soybeans are each within 1 to 5 percent of their respective five-year averages for progress as of May 3, with all five crops surpassing the progress made by this time last year.

Jarrod Hardke, extension rice agronomist for the University of Arkansas System Division of Agriculture, said growers around the state are now working overtime to get crops planted.

“Their hours are only limited by what their people can handle,” Hardke said. “To see tractors run after dark is not uncommon.”

Hardke said many growers were now faced with the irony of having waited out long weeks of heavy rains only to struggle with a narrow window of time before farmland — particularly that earmarked for rice — becomes too dry to plant or create levees.

“We’ve very quickly turned that corner from ‘so wet we can’t get in’ to ‘so dry we have to inject moisture to get a stand up,’” he said. “It’s like the old adage: you’re never more than two weeks away from a drought.”

Hardke said he and other agronomists with the Division of Agriculture were encouraging growers to plant a variety of cultivars and maturities in order to avoid having “large blocks of the same things all coming ready for harvest at the same time,” which could lead to issues with timely harvest resulting in yield and quality losses.