LONOKE, Ark. -- The University of Arkansas System Division of Agriculture is expanding its research into conventional or non-GMO soybean varieties as growers eye them as a way to combat escalating production costs and slipping commodity prices. 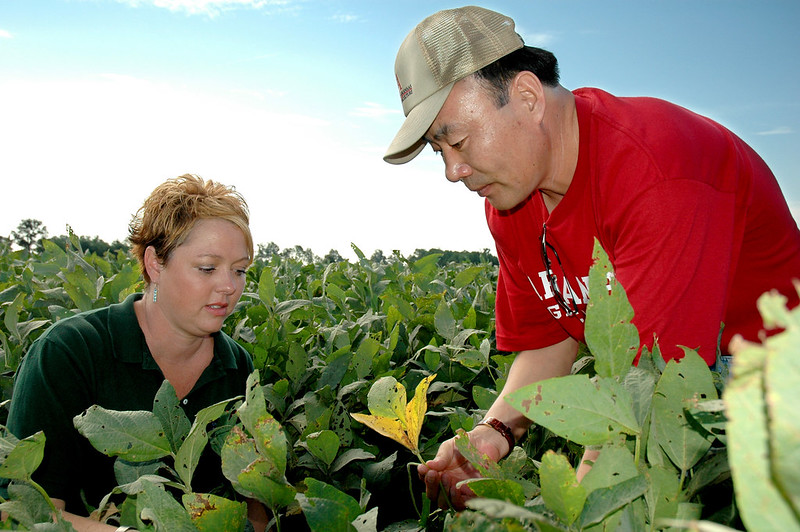 Jeremy Ross, extension soybean agronomist for the Division of Agriculture, said his trial plots are being seeded with nine conventional varieties, including four developed by the U of A System Division of Agriculture’s soybean breeder, Pengyin Chen: Ozark, UA5213C, UA5612 and UA5014C. In addition to a couple of private company varieties, this year’s trial includes two other public varieties: Virginia Tech’s highly adaptable Hutcheson and University of Tennessee‘s Ellis.

Ross began the trials last year at the request of the Arkansas Soybean Promotion Board. The first year’s trials were relatively small because of the scarcity of seed.

This year, he had enough seed for growth trials in five counties: Lafayette County in southwest Arkansas, White and Prairie counties near the center of the state, Clay County in northeastern Arkansas and Crittenden County on the Mississippi River. “This spreads us out across the state,” Ross said.

The interest in non-GMO varieties comes from the growers, who find they have some key advantages:

The rise of herbicide resistant weeds such as pigweed has also been a factor, said Prairie County Extension Staff Chair Brent Griffin.

“The resistance issue has really changed people’s mindset,” he said. “There are seven glyphosate resistant weeds now and other weeds that are resistant to other herbicides.”

Griffin said farmers in his county who have been growing non-GMO soybean varieties are finding they perform just as well as the non-conventional ones.

“They’ve been able to use conventional weed control to control the resistant weeds and still make 55- to 60-bushel soybeans,” he said. With falling commodity prices and profit margins at the razor’s edge, “They’ve got their backs against the wall” and saving on the technology fees, plus getting a premium, make non-GMOs a good bet.

Griffin said of the non-GMO market, ”Growers are watching it. It’s not a niche or specialty crop anymore. People are willing to spend the money for it.”

The growers pursuing non-GMOs most aggressively, whether soybean or corn, are those who have on-site storage. In addition to a premium for delivering after harvest, those growers who can harvest, dry and hold their grain for delivery when the poultry companies need it earn more.

“With this variety testing program, we are hoping to get more information on how these varieties will perform in field situations,” he said.

Ross said he expects his non-GMO trial to expand next year to 10 counties.

For more information about soybean production, contact your county extension office or visit www.uaex.uada.edu or http://Arkansascrops.com.

Arkansas Cooperative Extension Service is an equal opportunity/equal access/affirmative action institution. If you require a reasonable accommodation to participate or need materials in another format, please contact your County Extension office (or other appropriate office) as soon as possible. Dial 711 for Arkansas Relay.