AUSTIN, Texas – Students in some Arkansas school districts are getting fresh produce at lunchtime, plates laden with fruits and vegetables from the farms of their neighbors.

"Making connections -- encouraging farmers to work with their local schools to provide locally grown and fresh produce for their neighbors -- has really paid off for both the farmers and the schools," said Ron Rainey, professor-economics for the University of Arkansas System Division of Agriculture. "This is the essence of what Arkansas MarketMaker does: matching farmers with customers.” 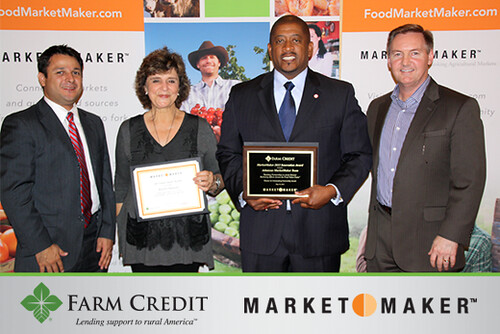 "We're proud to have national recognition for this effort," he said.

Chuck McCool, who grows watermelons and other produce in Yell County, said that “what began with my registration in MarketMaker two years ago evolved to an 80 percent increase in sales the first year” and helped him expand his operation to accommodate school year produce needs.

That Farm to School work also led to him “collaborating with non-profits to establish new farm to pre-school and summer feeding programs in my community,” he said.

“The farm-to-school connection is such a natural fit,” Rainey said.

Arkansas’ “Building Partnerships to Assist Grower Marketing Efforts across the Food Value Chain,” received $7,000 from Farm Credit as part of the award. Rainey said the prize money would go for program enhancements.

“Helping consumers find fresh, safe, healthy, local foods while providing producers with access to more and better markets is what MarketMaker does best. We are proud to be in our fifth year of supporting the Innovation Awards,” said Matteson.

“Farm Credit continues to support MarketMaker and recognize Innovation Award winners as examples of how good ideas can be used by others in the community,” Ray said.

MarketMaker is a national network of states that connect farmers and fishermen with food retailers, grocery stores, processors, caterers, chefs, and consumers. MarketMaker is hosted and maintained by Riverside Research and is guided by an advisory board made up of representatives from participating partner states.