By Ryan McGeeney
U of Arkansas System Division of Agriculture

MORRILTON, Ark. — Standing before a room of more than 40 producers from around central Arkansas, Hank Chaney, Faulkner County extension staff chair for the University of Arkansas System Division of Agriculture, began Monday’s morning on a frank note.

“This is a meeting we didn’t want to have,” he said. “But it’s the situation we’ve got.”

Chaney was the first of a series of extension agents and agronomists, along with representatives from the U.S. Department of Agriculture Farm Service Agency, who spoke to the assembled producers about options available to farmers who have suffered extensive crop loss due to repeated flooding in the state throughout April and May, after an already-wet spring. 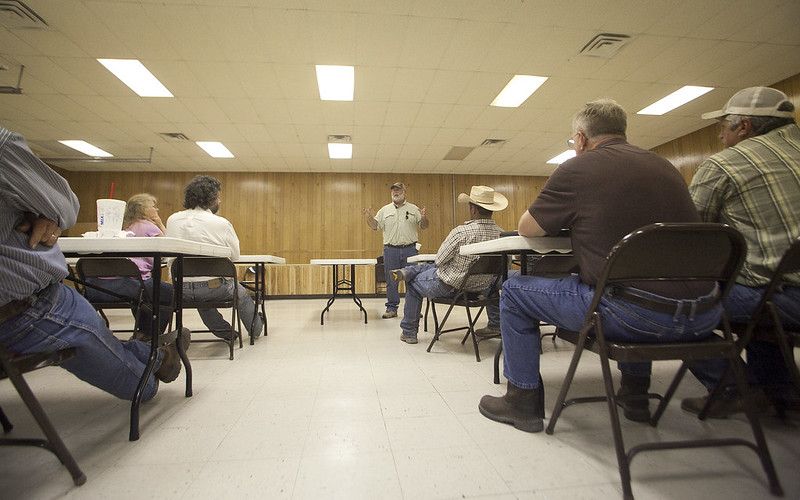 POST-FLOOD - Extension Entomologist Gus Lorenz talks about managing pests after the flood. He was among the experts speaking a meeting June 8, 2015, i Morrilton on managing crops after spring's flooding.  (U of Arkansas System Division of Agriculture photo by Ryan McGeeney)

“I’ve been in extension 30 years, most of it in the Delta,” Chaney said during a break in the meeting, held in the Multi-Purpose Building on the Conway County Fairgrounds. “So I’ve seen floods. But I’ve never seen anything this persistent or deep. I’ve got farmers with fields under 12 feet of water.”

Chaney said the purpose of the meeting was to present producers with “Some ideas of what they’ll likely be facing once the water comes off of the crop land that’s been flooded.

“Hopefully, we can provide them with some of the things they may want to consider before they go back and plant, provided the flood gets off in time, and we have enough time in the year to do it,” he said.

Chaney said many growers may turn to soybeans, which have a relatively late planting window compared to other Arkansas staples.  He said that although a saturated market may suppress market prices, the crop might be the best hope for many growers to recover sunk costs and service existing debt on equipment or land.

Planting soybeans after other crops — corn, for instance — can be a risky proposition at this point in the season, as many growers have typically already sprayed corn-appropriate pesticides to which soybeans are not tolerant.

Chris Schaefers, who farms multiple crops on about 1,850 acres in Faulkner and Perry counties near the Arkansas River with his brothers and father, is one of many growers facing that challenge, although he said he hoped the ongoing flooding may ameliorate the negative effects.

“I think the floodwaters have probably stayed on it long enough that it’s probably leeched it out,” Schaefers said.

Gus Lorenz, extension entomologist for the Division of Agriculture in Lonoke, said that once floodwaters do come off cropland, producers should be selective about applying pesticides.

“Obviously, there are some great concerns with planting late like this,” Lorenz said. “Insect management becomes a critical issue. You’ve not only got to weigh the insect pressure, but also the cost — the profitability. That’s the major concern for us: managing those pests as profitably as we can, realizing that the yield potential is probably not going to be what it would be on a full-season crop.”

Extension agronomists Jeremy Ross, Jarrod Hardke and Jason Kelley spoke to growers about prospects for soybeans, rice and grains, respectively. While most wheat, corn and hay grass in flooded areas are a total loss this season, and soybeans will likely be the top choice for replanting, rice occupies a middle ground, Hardke said, because it’s typically grown in a continuous flood anyway. Viably harvesting any rice crop in affected areas, however, depends on when floodwaters recede.

Shurtleff, who said her office covers six counties in central Arkansas, said she had been in contact with several growers throughout the area.

“It’s not our larger producers we’re concerned about, it’s the smaller farms,” Shurtleff said. “The larger ones are established and can weather a hiccup. The smaller ones, who maybe started in 2010, then lost everything in 2012, and were starting to slowly build back up — this is much harder on them.”