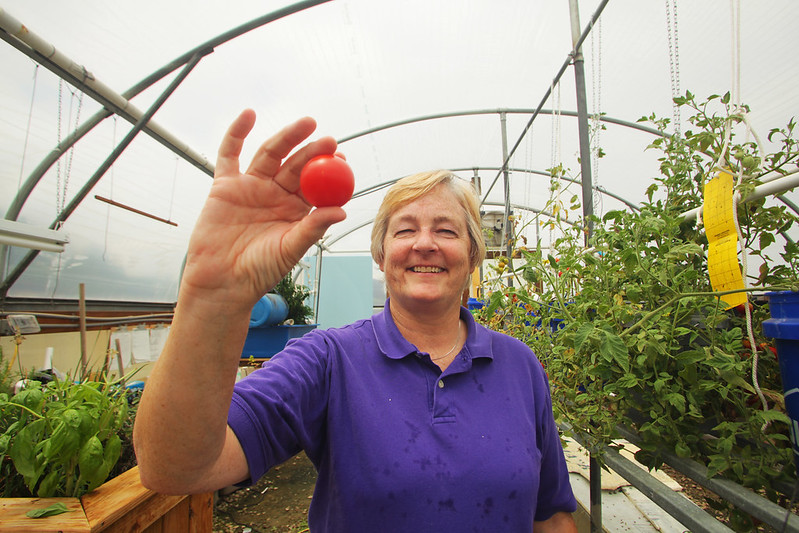 Anita Kelly, extension fish health specialist for the University of Arkansas Pine Bluff and associate director of the Aquaculture/Fisheries Center of Excellence,, discusses the aquaponics program at the Aquaculture Research Station in Pine Bluff. Aquaponics involves using the waste from fish to fertilize and feed plants in a soilless environment. The plants in turn cleanse the water of ammonia and nitrates, keeping it habitable for the fish. (U of A System Division of Agriculture photo by Ryan McGeeney)

Known as aquaponics, the systems are scalable, allowing first-time growers to enter the world of small-scale agriculture at a relatively low price-point. The concept marries fish tanks, ranging from 150 gallons to 10,000 gallons or more, to soilless plant beds. Water from the tanks is pumped into the beds, where bacteria break down to ammonia from the fish waste into nitrates, which fertilize the plants. The absorption of the nitrates into root systems minimizes the water toxicity for the fish.

Anita Kelly, extension fish health specialist for the University of Arkansas Pine Bluff and associate director of the Aquaculture/Fisheries Center of Excellence, said after raising fish and vegetables in her own back yard for about a decade, she began developing the extension aquaponics program around 2010, after her office received a series of calls from Arkansans looking for ways to thrive in a slowing economy.

“We started getting a lot of calls from people looking for ways to grow their own food,” Kelly said. “And this, of course, gives them two different crops — the fish crop and the vegetable crop.”

Kelly said her office typically receives anywhere from three to 10 calls each week from novice growers interested in aquaponics — many of whom she actually steers toward hydroponics (soilless gardening without the fish component).

“Aquaponics is more expensive to run than hydroponics,” Kelly said. “A lot of times, they say, ‘we just want to watch the fish grow,’ which is fine — but commercially, I don’t advise people to do it, because I don’t think it’s quite where it needs to be just yet. And I hate to see people put money into something they’re going to end up losing, in the long run.”

Kelly said many of the people who have contacted her about starting an aquaponics system are self-described “preppers,” or disaster-preparedness enthusiasts.

“They’re basically trying to set up a system so that they’re ready, should something happen,” she said. “They’ve got their own source of proteins and other types of things.”

Kelly said that an entry-level aquaponics system can be put together for about $150. She recommends using a tank with a capacity of at least 150 gallons — tanks typically support three to five fish per gallon — and a gardening bed measuring at least two by three feet.

Most systems rely on clay pellets to support plants’ root systems, as well as provide a surface for bacteria to colonize. Several different methods of pumping water between the tank and bed are available, and the decision on which to use should be based on the specific kinds of plants being grown.

Within the research station’s greenhouse, Kelly and her assistants have grown jalapenos, tomatoes, onions and other vegetables. She said she typically advises novice growers to begin with lettuce, as it is about as close to fail-proof as a greenhouse gardener is going to get. An aquaponics system can also be used to grow various flowers. Kelly said interested growers should consult the U.S. Department of Agriculture’s regional grow maps when choosing

Kelly said that although many aquaponics users gravitate toward tilapia, which originally gained popularity in the region for its taste, relative low cost and availability in supermarkets, she tries to steer them toward fish native to the region.

“People use tilapia because that’s what they’ve seen,” Kelly said. “They go to the grocery store, and buy tilapia, it tastes good. But it’s a warmer-water fish. So come winter, they’re either going to have to harvest all their fish, or find a way to heat the tank. The nice thing with the native fish is that you can let them go through a natural cycle, and basically raise cold-season plants in the wintertime.”

Kelly said home gardeners are the best candidates for aquaponics systems at this point in time, due to the lack of commercial viability, although she said the process may become more profitable in the next five to 10 years.

“But the numbers just aren’t there yet,” she said.