(Newsrooms: with downloadable art at www.flickr.com/photos/uacescomm/19498056913)

FAYETTEVILLE, Ark.  --Michael Looper, head of the Animal Science Department for the University of Arkansas System Division of Agriculture, will serve as president of the America Society of Animal Science through 2016.

Looper took the gavel in July during the annual meeting of the society in Orlando, Florida.

“It was quite an honor for the department and me to be elected,” Looper said. “It is my understanding I am the first from Arkansas to serve as president of the national society.” 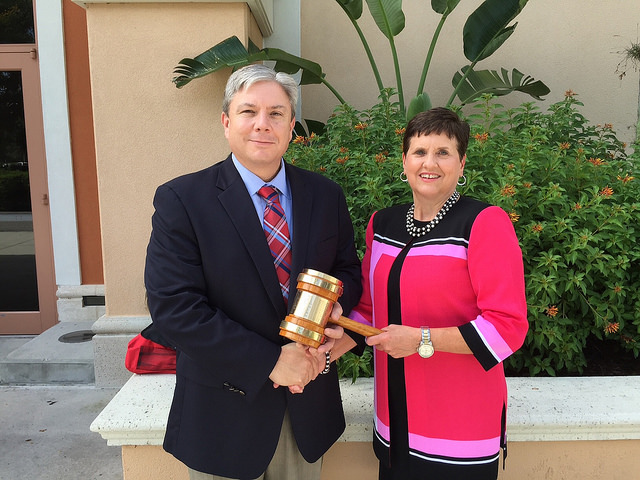 INCOMING -- Dr. Debra Aaron transferred the gavel to incoming ASAS President, Dr. Michael Looper of the University of Arkansas System Division of Agriculture, during the ASAS annual Business Meeting in July. Looper and the 2015-2016 ASAS Board of Directors began official duties this week at the annual meeting in Orlando, Florida. (Image courtesy ASAS)

As president, Looper will travel to Denmark and Poland in August to represent ASAS at the European Federation of Animal Science meetings.

The Arkansas native is part of his family’s fifth generation running a beef/dairy cattle operation in Sebastian County.

The American Society of Animal Science is a professional organization that serves more than 5,000 animal scientists and producers around the world.