FAYETTEVILLE, Ark. -- The 2015 4-H Governor’s Award winner has shown he can not only overcome adversity, but also help others through their own difficult times.

Joshua Lockhart, 19, of Gravette, son of Ross and Brenda Lockhart, has been selected as this year’s winner of the Governor’s Award, the highest honor in Arkansas 4-H. The award was announced July 23 at the State O-Rama. Phyllis Bell of the governor’s office presented Lockhart with a commemorative silver tray. 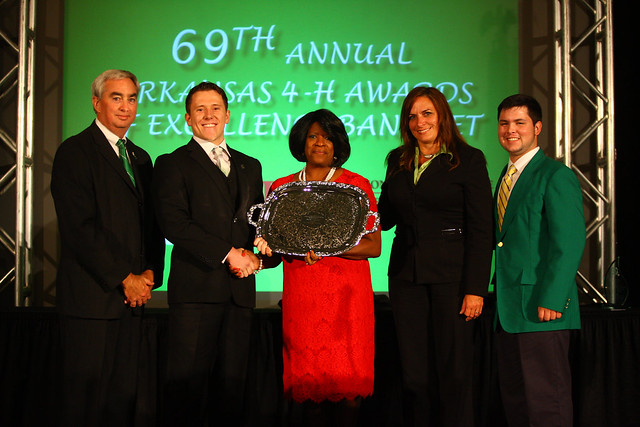 Joshua Lockhart, 19, of Gravette, son of Ross and Brenda Lockhart, was selected as the winner of this year’s Governor’s Award, the highest honor in Arkansas 4-H. The award was announced July 23 at the State O-Rama. Phyllis Bell of the Governor’s office awarded Lockhart with a commemorative silver tray.

He was selected from among three finalists who all went through rigorous interviews and were hosted for lunch by Gov. Asa Hutchinson and his wife Susan at the Governor’s Mansion.

“Joshua exemplifies the ideals 4-H seeks to instill in its members,” said Anne Sortor, associate director-extension for the 4-H Youth Development Program. “It’s wonderful to have our Governor’s Award winner and finalists as role models for our program.”

Lockhart, a freshman poultry science major at the University of Arkansas, grew up in a 4-H family on a cattle farm.

“It was a family tradition. My grandma was a 4-H leader for 25 years. And my dad was extremely involved. He went to 4-H National Conference,” Lockhart said. After starting in 4-H by showing cattle at age 8, Lockhart deepened his involvement.

Broken foot leads to another path

“I broke my foot when I was 13 and as a result it was going to be hard to show (cattle) in the fair,” he said. However, instead of sitting on the sidelines, he decided to look into 4-H poultry activities. He was hooked. “When all my friends were inside playing video games, I was inside looking up chickens.”

Susan Watkins, extension poultry specialist for the University of Arkansas System Division of Agriculture, said, “I would have to rate Joshua in the top five of students coming into our program because of his enthusiasm, his leadership skills that he’s developed through 4-H. His knowledge base that he’s also been able to develop through his experience through 4-H.”

“My big community service project was the Moore, Oklahoma, tornado,” he said. ”I developed a care package system, and we were able to mail them all for free and to families that immediately needed it.”

Michelle Rieff, leader of the Town & Country 4-H Club, of which Lockhart is a member, said that “Joshua’s biggest impact on our 4-H club has been his investment of time into others. He’s a fantastic role model for the juniors and the Cloverbuds. They respect him. They admire him and they listen to him.”

From that project to help those in need, Lockhart was named a state Record Book winner, an achievement that sent him to national 4-H Congress. Lockhart said he was awestruck by the event organizers and applied to become one of them the following year. He was elected the presiding officer in 2013.

Lockhart’s co-finalists were Lauren Cheevers of Fayetteville and Stephanie Williams of White County.

For more information about 4-H, contact your county extension office or visit www.uaex.uada.edu.