(Newsrooms with downloadable image of Troxel at: www.flickr.com/photos/uacescomm/19674269779/)

LITTLE ROCK -- Tom Troxel, associate head-Animal Science for the University of Arkansas System Division of Agriculture, has been named a Fellow in extension of the American Society of Animal Science.

The honor was bestowed on Troxel during the society’s annual conference July 12-16 in Orlando, Florida. 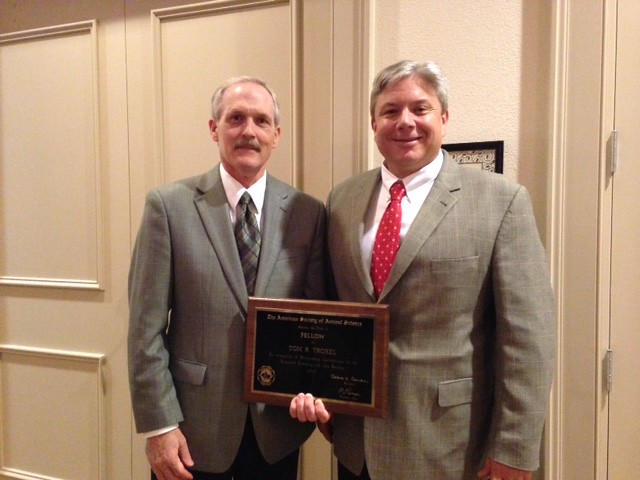 HONORED - Left, Tom Troxel, associate head-Animal Science, for the U of Arkansas System Division of Agriculture, poses with Mike Looper, right, head of Animal Science for the Div of Ag in Orlando, Florida. Image taken July 13, 2015. Troxel was named a fellow in the American Society of Animal Science. (Image courtesy Tom Troxel)

“I never dreamed I’d get that award,” Troxel said. “What was special about it was that it came from my peers in Animal Science.”

Troxel grew up working horses, but spent summers in high school working at a Montana cattle ranch and his interests swung to cattle in college.

He began his career with the Texas Agricultural Extension Service and achieved the rank of associate professor in 1983. In 1992, he accepted the position of Extension Beef Cattle Specialist and Animal Science Section Leader for the Cooperative Extension Service in Arkansas.

Throughout Troxel’s career, he made a number of major impacts that affected programs across the Southeast and the country. Many Beef Quality Assurance educators use studies conducted by Troxel in their BQA presentations.

“I’ve been very fortunate to work with really good people,” Troxel said. “Good county agents, good faculty, good producers. The aware reflects on working with good people, with good ideas and good results. They’re all part of this as well.”

Troxel was also heavily involved with the 300-Day Grazing Program. The program features demonstrations that will reduce the number of hay feeding days and the amount of feed, fertilizer and fuel requirements. The members of 300-Day Grazing team were headliner presenters at the 2012 National Cattlemen’s College. Their presentation was received with enthusiasm by cattlemen from across the United States as being novel, relevant and practical. “I’ve been very fortunate to work with really good people,” Troxel said. “Good county agents, good faculty, good producers. The award reflects on working with good people, with good ideas and good results. They’re all part of this as well.”

To learn more about personal and family finances, contact your county agent or visit www.uaex.uada.edu.