Research essential for Arkansas to remain competitive in agriculture

(Newsrooms: With downloadable art at https://flic.kr/s/aHskfHt68h)

Ward and about two-dozen members of the Joint Committee on Agriculture, Forestry and Economic Affairs met Wednesday at the Fruit Research Station in Clarksville. The station is one of 16 University of Arkansas System Division of Agriculture research and extension centers that develop, test and deliver new techniques to help farmers survive tough markets, natural disasters and shrinking profit margins.

“It’s why agriculture is the No. 1 industry in Arkansas — it’s because of what the research stations do,” Ward said. “If you look at any commodity, whether it’s rice or a specialty crop, if they didn’t have the latest research, Arkansas would not be as competitive as we are. Their ability to do what they do is very important for Arkansas’ competitiveness, from local markets to global markets.”

Mark Cochran, vice president for agriculture and head of the Division of Agriculture, emphasized the connection between the work conducted at Clarksville and its other research stations across the state and the educational outreach by Cooperative Extension Service agents who bring that research to the growers.

While the Division of Agriculture has some facilities and faculty on the Fayetteville campus, it is not funded through the university and is a distinct entity within the U of A System in the same way as the Clinton School for Public Service or the Criminal Justice Institute.

“We reach more Arkansans than anyone else in higher education, if you look across all our programs,” Cochran said. “Almost 90 percent of our contacts with state citizens come through county offices — that’s a big delivery mechanism. Our mission is to provide scientific solutions in an impartial fashion to relevant problems in the state.”

Of the approximately two dozen commodities produced in Arkansas, the state ranks in the top half of farm receipts in all but one of them, said Hank Chaney, extension area agriculture and natural resources specialist for the division. The state’s rankings are due in part to the significant increases in yields — particularly in rice and soybeans — that have been a direct result of crop science research conducted by the division, he said, and the efforts of extension agents to make that knowledge available to growers. 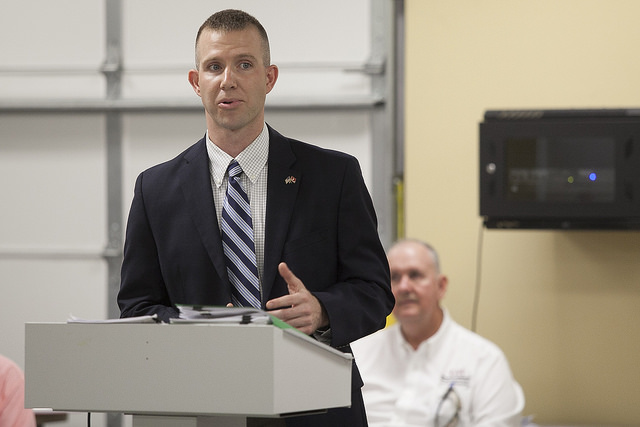 Arkansas Secretary of Agriculture Wes Ward addresses members of the Joint Committee on Agriculture, Forestry, and Economic Development during a visit to the University of Arkansas Fuit Research Station on July 15, 2015.

“The county program is where the rubber meets the road,” Chaney said. “Agents provide the research results to our clientele at the grassroots level.

“We’re also part of the county in which we reside,” he said. “To be successful as a county agent, you have to care about the people you work with and serve. That’s your greatest reward, knowing you’ve made an impact in someone’s life when you walk away.”

While the majority of the state’s crop production is in crops like soybeans, rice and corn, specialty crops including fruits and nuts remain are a valuable part of Arkansas food sales. The Fruit Research Station, home to hundreds of acres of blackberries, raspberries, peaches and other fruit, was a setting chosen in part to discuss the state’s market share of specialty crops.

Ward told legislators that Arkansas is projected to receive about $307,000 in federal funding in 2015 under the Specialty Crop Competitiveness Act of 2004. The amount, based in part on reported acreage of specialty crops, is about $50,000 less than the state received under the act in 2014.Ward said Arkansas has received about $2.7 million in federal funding through the program over the past decade.

“We would really like to see that number increase,” he said. “Specialty crops are an important part of Arkansas agriculture, and this is where we could really use your help. Sometimes, people don’t like to record that information or give it away, but it helps the state get extra funding for projects in the future.”

While the Legislative Council this week approved a request from Gov. Asa Hutchinson for a one-time transfer of $3 million from the state’s General Improvement Fund to the division, Rep. Dan Douglas of Bentonville, chairman of the House ag committee, said that funding for continued agricultural research should be a priority for the state legislature in the coming years.

“Nationwide, farming is a $130 billion industry, but it’s in decline. The budget is tight, but farming is 20 percent of our state’s” gross domestic product, Douglas said. “We’ve got to keep the Division of Agriculture funded, because if we don’t, we lose that valuable resource, on not only research, but educating the producers on how to produce their crops more profitably in a down market.”

Rep. David Hillman of Almyra, vice chair of the House ag committee, said that the Division is the key to developing the food products consumers want.

The University of Arkansas System Division of Agriculture is an equal opportunity/equal access/affirmative action institution. If you require a reasonable accommodation to participate or need materials in another format, please contact your (insert appropriate office) as soon as possible.  Dial 711 for Arkansas Relay.