(Newsrooms: with downloadable images at www.flickr.com/photos/uacescomm/)

In northwest Arkansas, the National Weather Service reported waist-deep water on Arkansas 7 on Sunday in Newton County near Dog Patch with a vehicle swept from the road and submerged. 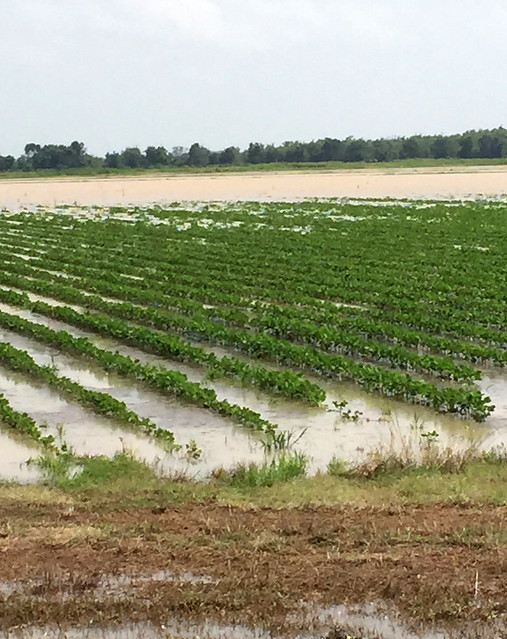 FLOODED -- Soybean field in Desha County, Arkansas, is flooded after Fourth of July holiday weekend storm system dumped more than 10 inches of rain in some spots (U of Arkansas System Division of Agriculture photo by Wes Kirkpatrick)

Since Friday, some parts of SE Arkansas reported up to 10.5 inches of rain.

“Some beans are going to take it on the chin,” he said, adding the worst case scenario would be, “if the water stands on them for any amount of time, and then if the sun comes out and gets hot, some of those beans will likely die.”

“It’s already July 6 and by the time it gets dry enough to replant, it’ll be the middle of July,” Kirkpatrick said. “It’s the same scenario as other parts of the state, except we’re later. We’re already looking at half your yield potential on any fields that will need to be replanted.”

The NWS reported flash flooding and road closures in Desha County on Sunday.

“I went out looking around yesterday and saw a lot of flooded roads, but most of that has gone down. We’ve got a pretty good drainage system down here,” he said. “The problem is when those drainage canals get full and all the ditches are full, the water will stay out on some fields.”

Southwest Arkansas was hit by heavy rain that fell in a short period Friday night into Saturday. In some locations residents reported 6 to 10 inches of rain. All this on the heels of a very wet spring that saw severe flooding along the Red River from constant rain and from the remnants of Tropical Storm Bill. On Thursday night, more than 140 people attended a flood recovery meeting in Texarkana for livestock and crop producers.

“The county judge had a beginning estimate of $400,000 in damage to roads as of Monday morning and it was growing as more roads were being identified with damage,” she said.

“I’ve never seen anything like it,” said Steven Sheets, Hempstead County extension agent for the Division of Agriculture.  Sheets said flooding in the river bottoms is expected, but “not here. This is the high ground.”

Sheets, who has a farm in the county, said he estimated that at one point, there was eight feet of water over one culvert. The water then spread out, covering 50-60 acres of land across two fields. The high water claimed a dump truck, a hay baler, and kidnapped a few of his hay bales.

He wasn’t alone in losing hay.

“I had a producer with 50 and 60 bales in a field and the water floated them all off. Six to eight of them were deposited along the woods line. The rest just disappeared,” he said. These were no small square bales, Sheets said, the five-foot by six-foot round bales “weigh 1,200 and 1,400 pounds each.”