MARION, Ark. — As cattle ranchers and other growers continue to struggle with the fallout from weeks of flooding in central and southwest Arkansas, row crop farmers along the state’s eastern border brace for likely flooding and crop loss as the Mississippi River continues to swell toward flood stage this week. 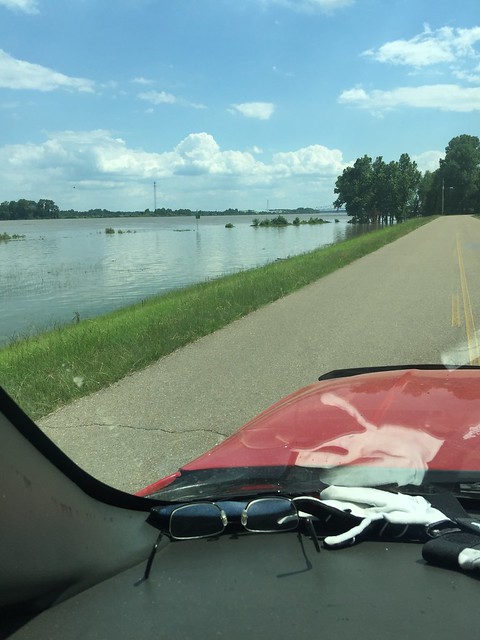 Russ Parker, Crittenden County extension agricultural agent for the University of Arkansas System Division of Agriculture, said a rise in the Mississippi River in late June and early July is unprecedented, and could result in the flooding of more than 12,000 acres of farmland that lies between the river and its western levee in Crittenden County alone.

“Normally, the threat of flooding has passed by this time of the year,” Parker said. “This year, however, is different. We had those rains that went across the Midwest, and we really had big rains in the Ohio Valley, which really affects the Mississippi River here more than just rains on the upper Mississippi Valley.”

About 3,000 of the acres that will likely flood are located on a parcel of land known as Island 40, about 10 miles north of Memphis, Tennessee. Although the land is east of the Arkansas-Tennessee border, it is primarily farmed by Arkansas growers, Parker said.

Further north, Ray Benson, Mississippi County extension staff chair, said area farmers had worked together to create an emergency levee to protect crops in the flood plain near the river, although the area was ultimately flooded eventually.

“I guess it’s always a bit of a risk when they plant inside of a flood plain,” Benson said. “A lot of times, if it’s close to flood stage, they’ll work on the levee to buy a little time and hope it goes down, and a lot of times it can do that. This time, it came up quicker than they could keep up with it.”

Benson said about 2,000 to 3,000 acres of crops had already been lost to flooding as of this week.

The river is expected to crest near Memphis on July 8, Parker said, after which it should slowly recede. He said the primary crop grown in the Island 40 area is soybeans, and a small amount of sorghum. He said some farmers may try replanting as soon as the soil becomes dry enough, although by the third week of July, growers can expect a 50 percent reduction in yield per acre.

“I’ve lived in counties bordering the river pretty much all my life, and I’m not sure we’ve ever had a rise that happened this late into June, going into July. It’s very uncommon. I’m not sure it’s ever happened with this timing before,” Parker said. “The farmers are used to the rising and the falling of the river, and they plan accordingly. But you can’t plan for a July flood on the Mississippi River.”