Ark cotton looks good, but still a lot of bears in the woods before harvest
skip to main content
2015

Ark cotton looks good, but still a lot of bears in the woods before harvest

NEWPORT, Ark. -- Despite a slow, rainy start to the planting season, Arkansas’ small cotton crop is looking good, but there are “still a lot of bears out in the woods,” said Bill Robertson, extension cotton agronomist for the University of Arkansas System Division of Agriculture.

“A lot can happen between now and harvest time,” he said Monday. 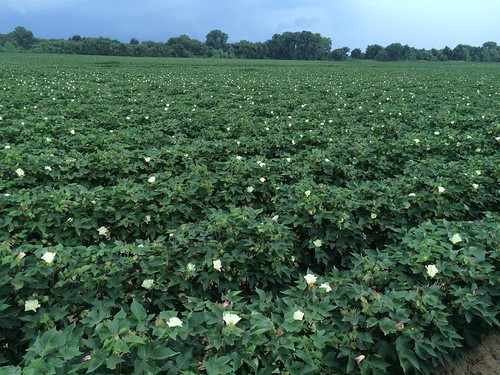 A-BLOOM - Cotton field in St. Francis County, Arkansas, taken July 23, 2015. This is textbook "Blooming out the top." (U of Arkansas System Division of Agriculture photo by Bill Robertson)

Earlier this month, the National Agricultural Statistics Service of the U.S. Agriculture Department issued its nationwide crop forecast. The forecast for Arkansas included a record high yield of 1,226 pounds of lint per acre from 235,000 harvested acres, a record low number.

“Arkansas’ planted acreage is down at least 95,000 acres from last year, or about 28 percent. Since January, the December futures contract has traded between 61 and 68 cents,” said Scott Stiles, extension economist for the University of Arkansas System Division of Agriculture. “Even without the rain delays we had this spring, cotton prices were low enough to reduce acreage.”

Robertson said he had a “hard time arguing with those numbers right now.”

However, there are differences in the estimate for harvested acres. For example, the Boll Weevil Eradication Program counts 200,335 acres and Farm Service Agency’s figures are 5,200 acres different from the boll weevil program figures. The differences are attributed to variations in counting methods. “One might be a little high, one might be a little low.”

“When I look at the crop we have now, it looks as good or better than last year,” he said. With the weather becoming more moderate, “we’ll still have a fairly good yield potential.”

Seed-per-boll numbers were a little off from the past few years, and “we might not beat last year by very much or we might come up a little shy,” Robertson said.

Growers could begin harvest as early as mid- to late-September, and most growers should have their picking machinery deployed by the first of October.

The crop had a lot of catching up to do, as spring rain kept planters out. Robertson cited the problems faced in Poinsett County, which is usually No. 5 among the state’s cotton-growing counties.

“Poinsett County was extremely hard hit with rains in May and we couldn’t get in to get planted,” he said. “We were at May 40th and still wanting to plant and weather forced some growers to switch to another crop.”

May 40th? “Because we don’t plant cotton in June,” Robertson said with a chuckle.

Persistent rain also prevented growers from putting out herbicide and encouraged seedling disease, which made for thin stands for some growers.

Growers spent the summer battling pressure from plant bugs that were higher in number due to the higher amounts of corn and grain sorghum in surrounding fields. As these crops mature and plant bug numbers build, they move into cotton.

“When you’re surrounded by corn and other crops, it’s very difficult to get on top of it” especially when farmers look at the cost of control and other investments in the crop and price at which the crop can be sold, Robertson said.

To learn more about cotton production, contact your county agent or visit www.uaex.uada.edu.