ROHWER, Ark. –There’s an odd tool that’s appearing in maturing corn plots around Arkansas: what looks like a pair of red bolt cutters coupled together, with the cutting heads precisely 8 inches apart.

With it, researchers with the University of Arkansas System’s Division of Agriculture are cutting uniform corn stalk sections at a set height above the ground as a means to see how efficiently the plant has been using nitrogen applied as fertilizer.

The results of Corn Stalk Nitrogen Test, or CSNT, can give farmers and researchers “a report card on how you did with your nitrogen,” said Trent Roberts, assistant professor-Crops, Soil and Environmental Science.

CSNT was developed in the 1990s and is commonly used throughout the Midwest’s Corn Belt. Roberts said the Natural Resource Conservation Service of the U.S. Department of Agriculture “is using it as a check. Are these producers optimizing or over-fertilizing?

The NRCS “has this program nationwide and in each state, the criteria is based on land grant university recommendations,” Roberts said. “For NRCS to correctly implement the program, we have to have university guidelines.”

That’s where the Division of Agriculture comes in.

The difference between the Corn Belt and Arkansas is that Midwest farmers have to rely on rain. In Arkansas, “they can make it rain anytime they want to” with irrigation. 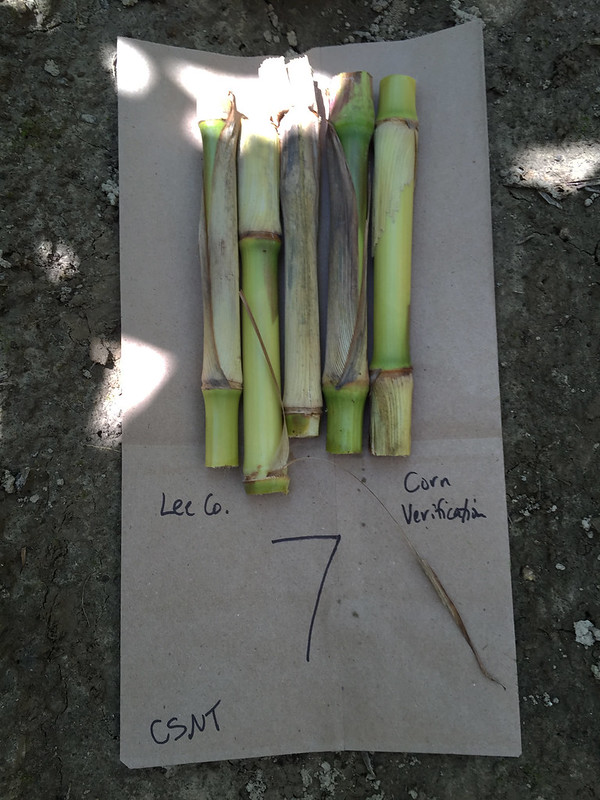 SECTIONS -- Corn stalk sections from a Lee County verification field to be used in Corn Stalk Nitrogen Test. (U of Arkansas System Division of Agriculture photo by Kevin Lawson)

“Nothing like that has ever been done in irrigated corn in the South,” Roberts said. “What grad student Chester Greub and I are researching is whether limits in the upper Midwest are accurate in the South.

“The verification program was a good place to get data to see what types of levels occur in irrigated land,” he said.

Roberts, Greub and the corn verification team began work on creating a set of recommendations in 2013.

“We're hoping that after this year, we’ll have sufficient data to set those limits,” Roberts said. “If you are below that value, then the corn is deficient. If it’s between this value and another value, then it’s optimum. If it’s above that upper optimum value, then it was excessive or over-fertilized.”

For more information on crop production, contact your county extension office or visit www.uaex.uada.edu, or http://Arkansascrops.com.