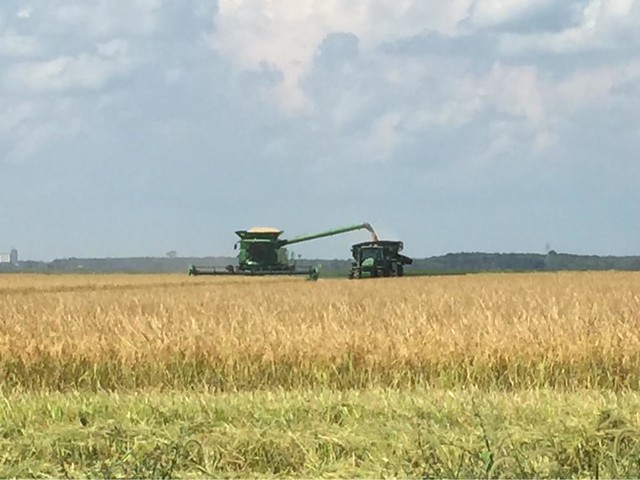 Soybeans were projected to yield 53 bushels per acre, which would be a new state average record, up three bushels from last year. Arkansas growers planted 3.2 million acres of soybeans, down 1.2 percent from the previous year. A 53-bushel-an-acre yield would tie Arkansas with Illinois, second only to Nebraska’s projected 56 bushels per acre.

Jeremy Ross, extension soybean agronomist for the University of Arkansas System Division of Agriculture, said the 53-bushel-per-acre forecast took him by surprise.

“We had record yields the last two years, but July and August 2015 were much, much hotter and drier than they were the last two years and that’s affecting yields,” he said. “And a large percentage of acreage in the northern part of the state was planted extremely late — a lot later than the last two years. That’s two strikes against us for high yields.”

Ross said he was “predicting in the mid- to upper-40s for the state yield. I just don’t see us hitting 53 bushels an acre.”

Rice production was forecast down from 112 million hundredweight last year to 105 million this year.

From bulls to steers

“Traders were shocked by the bearish numbers and the USDA’s higher yield and production estimates,” said Scott Stiles, extension economist for the University of Arkansas System Division of Agriculture. “Grain bulls were steers by the end of today’s trading.”

“With expectations for lower yields, ending stocks for both corn and soybeans were also expected to decline,” Stiles said. “That didn’t happen either.”

“After the release of these numbers, both markets sold off dramatically with soybeans nearly trading limit down,” he said. “Corn prices held up better but still finished the day lower.”

Stiles said wheat report numbers were actually close to pre-report expectations, but price direction followed that of corn and soybeans.