By The U of Arkansas System Division of Agriculture

FAYETTEVILLE, Ark.  — As summer approaches and high mid-day temperatures become the norm, cattle producers should give extra attention to making sure their herds have plenty of water to deal with extreme heat for the next several months. 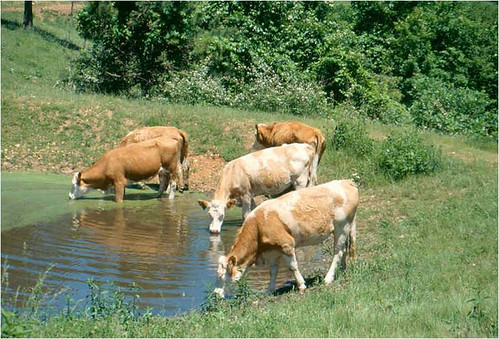 THIRSTY -- Cattle quench their thirst in a stock pond in this undated file photo. (U of Arkansas System Division of Agriculture photo by Tom Troxel)

“Water is probably the most overlooked feature on a livestock farm,” said Dirk Philipp, assistant professor-forages for the University of Arkansas System Division of Agriculture. “Clean, abundant drinking water is important for optimal animal importance.”

Philipp said that that access to drinking water typically increases the amount of dry matter, such as hay and other forage, that cattle ingest, which in turn helps regulate body temperature.

Insufficient water intake in cattle can result in decreased rates of rumination and respiration and increased concentrations of urea and potassium in blood serum. Severe shortages over extended periods of time will result in animal losses, Philipp said, with the chance of survival under temperatures greater than 100 degrees Fahrenheit limited to three or four days.

The water needs of individual animals depend on several factors, including outdoor temperature, the age of the animal and the moisture content of the animal’s forage diet. Philipp recommended producers make sure their cattle get approximately one gallon of water per pound of dry matter consumed.

“Mature animals have about 10 times more water reserves for metabolic functions than calves,” he said. “Therefore, young animals are much more sensitive to water-related stress and distress, such as diarrhea.”

Philipp said that the best approach to making water readily available to herds is to set up dedicated, waterline-fed access points. Examples include freeze-proof watering stations, tire tanks that can be connected to ponds and stock tanks that are filled periodically with fresh water or hooked up to a water line.

Dedicated pond and stream access points are better than nothing, Philipp said, although bacteria, pathogens and parasites are often abundant in those situations, due to the high contamination potential from cattle feces.