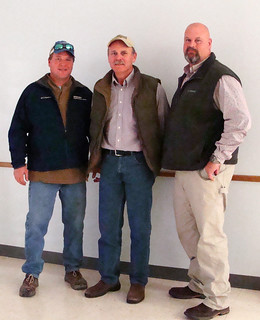 WITH THEIR PROF -- Nelson Crow, left and Matt Miles, right, take a moment with Paul Francis, one of their professors at UAM. (U of Arkansas System Division of Agriculture photo)

McGEHEE, Ark. – Matt Miles of McGehee has become the first Arkansas grower to break the 100-bushel per-acre barrier two years in a row.

On Wednesday, the Miles squeaked over the mark, harvesting 100.609 bushels per acre on a field planted April 18 in Pioneer P45T11R. In 2013, Miles was part of a trio of growers who broke the 100-bushel-per-acre barrier during a season where growing conditions were nearly perfect for soybeans.

It was so close, “my combine operator asked me, ‘do you have any skin left on your teeth?’” Miles said Thursday.

Unlike 2013, the 2014 growing weather was notably cooler and wetter.

“What was scaring me more than anything was the amount of moisture we got and the amount of stress we got between the cold and the moisture,” he said. “We were very nervous.” 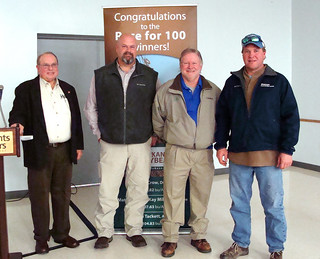 THREE WINNERS -- From left, Matt Miles, Nelson Crow and Eddie Tackett, pose with Lanny Ashlock after fielding questions from fellow producers on achieving the goal of 100 bushels per acre in Arkansas. They were part of the program at the Tri-State Soybean Forum in Dumas, Ark., on Jan. 3, 2014. The three were named winners in the Race for 100. (U of Arkansas System Division of Agriculture photo)

“Nelson and I have been trading information. We’ve kind of been helping each other,” Miles said, adding “I told him I knew how he felt last year and that maybe this year he’ll be at 108 bushels.”

Jeremy Ross, extension soybean agronomist for the University of Arkansas System Division of Agriculture, said he wasn’t really surprised. In the southern part of the state, where Miles lives, “had really similar environmental conditions to last year. Once you get north of Jefferson County, Stuttgart and Helena, we were wetter than 2013.”

Ross said that Miles didn't do anything unorthodox to achieve his high yields.

“Matt and Nelson do baby their beans a little bit,” Ross said, but  “a lot of what they do are our recommendations.”

“Matt has set the bar pretty high. They know how to grow soybeans,” he said. “This is the first time this has ever happened two years in a row on the same farm.”

However, no big event is without drama.

Kirkpatrick was among the team charged with certifying the harvest as part of the Arkansas Soybean Association’s Grow for the Green Soybean Yield Contest.

“We showed up at the elevator, and of course, when you’re anticipating something, time creeps by,” he said. Obtaining the net weight the certification team needed would normally take 30 minutes. Wednesday night, it took 2.5 hours, thanks to equipment problems.

The 100-bushel-per-acre yield had long been a goal for Arkansas soybean growers and Crow, the Miles and Eddie Tackett of Atkins, shared the $50,000 prize in the Race for 100 competition, funded by the Arkansas Soybean Promotion Board.

Miles’ achievement was announced Thursday by the Arkansas Soybean Association.

For more information about soybean production, contact your county extension office or visit www.uaex.uada.edu or http://arkansascrops.com.

For more information about the Grow for the Green contest, visit www.arkansassoybean.com.