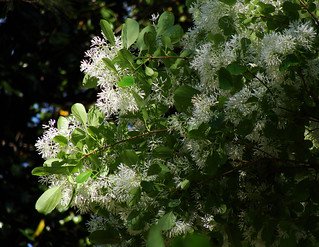 FRINGE BENEFITS - The fringe tree is a native to the Southeastern United States and is often seen the Ouachitas and southern counties of Arkansas. (Image courtesy Mary Hightower)

LITTLE ROCK  – The white fringe tree, a plant that lights up the spring landscape with white clusters of flowers, has been confirmed as a host for the emerald ash borer in Ohio.

Chionanthus virginicus, also known as Grancy Graybeard or Old Man’s Beard, is a relative of the ash tree that is native to the southeastern U.S. It’s common in Arkansas west of the Delta in the Ouachitas and southern counties and usually grows as a multi-stemmed tree or large shrub, reaching 15 to 20 feet high. It is the only plant of its genus that is native to the U.S.

“We must emphasize that this finding has been confirmed only in Ohio at the moment,” said Tamara Walkingstick, associate director of the Arkansas Forest Resources Center of the University of Arkansas System Division of Agriculture. “This discovery means we will be broadening our search for evidence of ash borers adapting to additional hosts.”

According to “Entomology Today,” Wright State University Professor Don Cipollini found the ash borer attacking fringe trees in Ohio. He told the outlet that the ash borer “may have a wider host range than we ever thought in the first place, or it is adapting to utilize new hosts.”

Since the emerald ash borer was discovered in the United States 12 years ago, the borer is blamed for the deaths of tens of millions of trees in the U.S. and Canada.

In September, the Arkansas State Plant Board imposed an emergency quarantine in 25 counties to slow spread of the tiny green beetle. The ash borer had been confirmed in Clark, Columbia, Dallas, Hot Spring, Nevada and Ouachita counties. The quarantine requirements remain unchanged at this time. The emergency quarantine regulations and map can be found at: http://www.aad.arkansas.gov/emerald-ash-borer.

The quarantine would bar movement of firewood and nursery stock out of the quarantined area to slow the insect’s spread. Firewood should be sourced locally and burned locally, state officials said. (See: www.uaex.uada.edu/media-resources/news/april2014/04-18-2014-Ark-Invasives-Firewood.aspx)

Ash borer damage and symptoms on white fringe are the same as those in infested ash trees.

If any of these signs of infestation appear, contact your county extension agent or email the Arkansas State Plant Board at EAB@aspb.ar.gov.