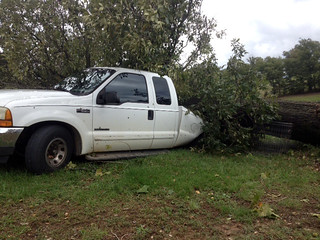 CRUSHED -- Tree that fell on pickup truck as strong winds moved through Madison County, Arkansas, before daybreak. (U of Arkansas System Division of Agriculture photo by Darrin Henderson)

HUNTSVILLE, Ark. -- It wasn't an alarm clock that woke Darrin Henderson up on Monday, but the shriek of high winds and a storm’s deep rumble.

A strong line of storms scythed across Arkansas leaving one person dead and twisting trees and uprooting buildings. Little River County officials confirmed one death near Ashdown, and a team from the National Weather Service office in Shreveport, Louisiana, was en route to survey the area. 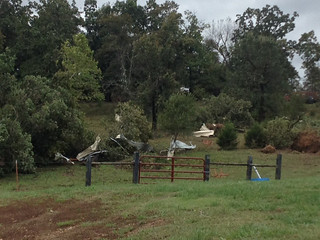 REMAINS - What's left of a carport moved a half-mile by strong winds Oct. 13, 2014, in Madison County, Arkansas. (U of Arkansas System Division of Agriculture photo by Darrin Henderson)

“I woke up at 5:30 and heard the wind screaming and a deep thundery roar and the garage door blew in,” said Darrin Henderson, Madison County extension staff chair for the University of Arkansas System Division of Agriculture. “By the time I went to grab up the kids, it was over.

The high winds “missed us by about 200 feet. It went through a hayfield and damaged my father-in-law’s house. His carport is in my neighbor’s pasture about a half-mile away,” he said, adding no one was injured and all horses, cattle and dogs were accounted for.

The damage won't always show immediately, Hardke said. An initial walkthrough might show a small area of lodged rice, but in a week or two, that area might have grown. 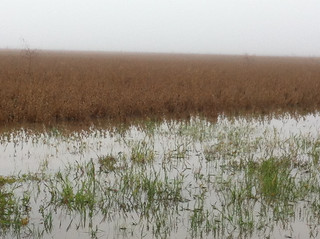 FLOODED BEANS -- Soybeans awaiting harvest in Chicot County, Arkansas, sitting in water after 3-plus inches of of rain. Taken Oct. 12, 2014 (U of Arkansas System Division of Agriculture photo by Gus Wilson)

“The problem with rice is if there’s enough wind to get the lodging started, then it’s a big domino effect,” he said. “You get one little swirl 20 feet wide and that extra pressure, and gradual wind and heavy dew and the area laying on its side will get larger and larger.”

Sunshine was expected to return to the forecast on Wednesday.

For more information on crop production, contact your county extension office or visit www.uaex.uada.edu, or http://arkansascrops.com. 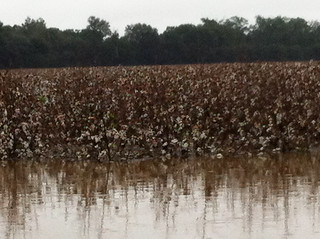 WET COTTON -- Cotton awaiting harvest in Chicot County, Arkansas, sitting in water after 3-plus inches of of rain. Taken Oct. 11, 2014 (U of Arkansas System Division of Agriculture photo by Gus Wilson)