Winter can mean more problems with predators - Part I 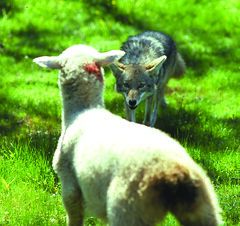 Prey become harder to find as reptiles, amphibians and rodents burrow under the ground or beneath deep snow, and many birds migrate south. Livestock, especially those kept on smaller acreages, become easy prey.

“Knowing what is attacking your livestock is important before you can begin to control prey,” Fernandez said.

Most livestock producers think of coyotes when they think of predators. Coyotes are efficient predators; they typically kill their prey. They bite the neck and eat most of what they kill. The digestive tract may be dragged away from the carcass and left behind.

In many areas, dogs run loose, and one or two dogs or a pack of dogs may attack and kill livestock. Dogs tend to attack the flanks, belly and legs of livestock, but they will occasionally attack the head and neck. They are not very efficient predators and often injure or maim livestock instead of killing it, says Dr. Fernandez.

Ears, noses and lips are often badly mauled. The result is a large veterinary bill and lost production. It is not uncommon for mauled livestock to die even after extensive cost and care. Dogs often do not eat their prey, and dogs will “thrill kill.” One or two dogs can kill 20 to 25 ewes in just a few hours, Fernandez said. Even small dogs weighing 10 pounds of less can harass and injure livestock.

Bobcats rarely attack adult sheep or goats, but small kids and lambs may be taken. Bobcats usually attack from above and kill by biting through the top of the neck or head. The hindquarters are preferred by bobcats, and the forequarters are often left behind uneaten.

Few producers consider feral hogs as predators, but increasing populations in Arkansas and elsewhere are causing increased livestock losses. Hogs leave little behind. Their tracks tell you they were responsible, Fernandez said.

Like feral hogs, black bears are becoming more populous and a problem for livestock producers. Bears bite the neck or break it with a slap. Carcasses are often mauled and badly torn. Udders, hearts and livers are eaten, and the intestines will often be spread over the area where the animal was killed.

Don’t forget attackers from the air, he said. Hawks, owls, crows and eagles migrate, searching for prey as they move south for the winter and later north to breeding grounds. All of them can main young or small livestock. Only the rumen and skin of sheep and goats may be left.

Once the source of predator damage is identified, then effective control can begin. Part II discusses options for specific predator control.

For more information on identifying predator damage, contact Dr. Fernandez at fernandezd@uapb.edu or (870) 575-7214.