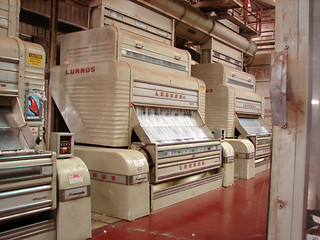 INSIDE STORY -- Looking at a gin stand inside a cotton gin near Helena, Ark. (U of Arkansas System Division of Agriculture photo by Robert Goodson)

JONESBORO, Ark. -- Last year, 39 cotton gins operated across Arkansas, combing the seeds out of the state’s cotton crop. That’s a steep drop from 2000, when 86 gins were humming across the Natural State.

The decline in the number of gins is one of the more visible signs of the overall shrinkage of the cotton crop, not only in Arkansas but also across the entire Mid-South region. However, the reason for this decline has less to do with the cotton crop itself and more to do with the success of two other crops – corn and soybeans – that have taken a bite out of cotton acreage.

“Both of these crops have captured cotton acres, and producers have found these crops to be extremely profitable from both a price and a yield standpoint,” said Scott Stiles, an extension economist with the University of Arkansas System Division of Agriculture. “There are a number of actors behind the shift away from cotton, but profitability and ease of management for competing crops are the biggest drivers.” 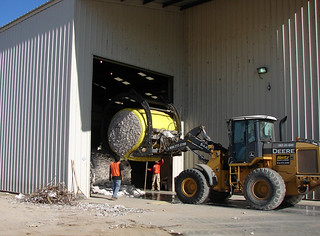 LOADING UP -- Front loader handling a round bale at a cotton gin near Helena, Ark. (U of Arkansas System Division of Agriculture photo by Robert Goodson)

Last year, cotton production in Arkansas dropped below 300,000 acres, breaking the previous record low of 320,000 acres set in 1983. Together, the five Mid-South states – Arkansas, Louisiana, Mississippi, Missouri and Tennessee – produced 1.7 million acres in 2013, down from 3.9 million acres in 2000.

Bill Robertson, a cotton agronomist with the Division of Agriculture, said the value of cotton production has not kept up with rising costs, including seed, fertilizer, fuel, equipment and new technology. However, he said cotton acreage appears to have stabilized and is projected to increase 5 to 10 percent this year over those 2013 levels.

“Many believe that we are at our low in terms of cotton acres and expect to see an increase in acres over time,” Robertson said. “We will not likely return to a million acres, but we could possibly exceed 500,000 acres over time.”

Rotating grains with cotton also provides a number of benefits, including improving organic matter in the soil, reducing nematodes and disease pressure and helping to manage weeds, Robertson said.

However, growers who have been shifting from cotton to grains have also been investing in grain harvesting and storage equipment, which will make it more difficult to shift back to cotton in the future, he said.

While the drop in cotton production has accelerated the decline in the number of gins, those that are left have been updated to make them more efficient. However, the use of new cotton harvesting machinery, particularly the popularity of round-module cotton pickers, is forcing gins to invest in new equipment to be able to better accommodate the modules, Stiles said.

“Having to spend several thousand dollars on upgrades while facing the prospect of declining volume due to lower acreage has led to some gin closures,” he said. “This issue likely had more of an impact on the aging gins in the state.”

Cotton growers who have seen their local gins close also have to deal with increased distances to transport their crop for processing.

“In many cases, gins are willing to drive great distances,” Stiles said. “Driving 40 or more miles for a module is not unheard of at all. In the current environment, gins are desperate for volume and willing to stretch distances.”

In addition to transporting from greater distances, gins have also extended their seasons to make up for the reduced capacity, Robertson said.

Another idea that’s been discussed is to have the gins themselves purchase harvesting equipment for use by their customers, reducing the growers’ capital investment and thus making cotton more profitable.

“That’s obviously a significant financial consideration for any farm business, and it also requires a significant commitment of acreage of cotton to justify the purchase,” he said. “For each round module cotton picker, I think most producers are looking to harvest near 1,900 acres at a minimum. So with the purchase of the machine also comes a significant acreage requirement.”

However, while the idea of sharing harvesting equipment has been discussed, it has yet to be implemented in Arkansas, Stiles said.