Wheat harvest rolling, some test weights off due to wet spring
skip to main content
2014

Wheat harvest rolling, some test weights off due to wet spring 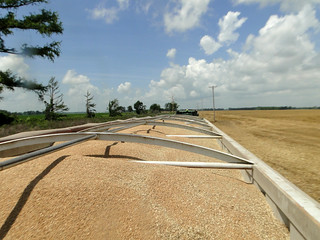 PIGGOTT, Ark. – Arkansas farmers took advantage of a week of dry weather to get the winter wheat harvest rolling, and while yields are decent, the wet spring took its toll on grain fill.

“Most of the wheat is yielding pretty good with yields from 50 to over 70 bushels,” said Andy Vangilder, Clay County extension staff chair for the University of Arkansas System Division of Agriculture.

“Wheat does not like wet feet. It needs good drainage,” Vangilder said. “Any time you have soil wet and as long as ours was, the crop can have the potential to not fill the grain out as well and therefore it tends to weigh lighter than normal.” 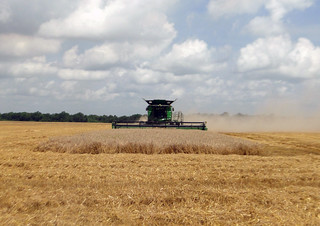 The test weight is based on 60 pounds per bushel. If the amount falls below that, the price paid the grower is cut.

Vangilder said where drainage was good and armyworms controlled, test weights were around 56-58. “However several fields have had some test weights in the low 50s and they are getting hammered by discounts at the elevators,” he said.

South in Phillips County, “the wheat harvest is going strong. We are about 50-60 percent complete,” said Robert Goodson, county extension agent, adding that the county average will be between 70 and 75 bushels, with a very limited number of fields yielding as high as 100 bushels.

“As in the north, test weights were off for some and the producers are taking a hit at the market,” he said.

“Yields overall have been average to better than average. What’s been disappointing has been the test weights,” Jason Kelley, extension wheat and feed grains agronomist for the University of Arkansas System Division of Agriculture, said on Friday. “Anything below 58 pounds per bushel is going to have a discount.

“Some producers have wheat booked at $7 or more a bushel. Now with the going price less than $6, and you add discounts, it could quickly become $4 wheat instead of $7,” he said. 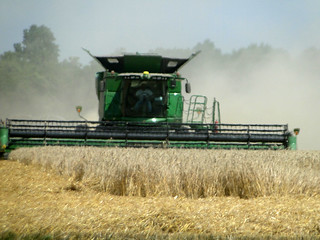 Earlier this week, July 2014 wheat futures settled close to $5.81 a bushel after an earlier rally sparked by tensions between Russia and Ukraine. That rally peaked at $7.44 a bushel, said Scott Stiles, extension economist for the University of Arkansas System Division of Agriculture.

“Since then, prices have collapsed,” he said. “There's still uneasiness, but the situation in Ukraine has settled down somewhat, corn prices have also turned sharply lower, and wheat prices offered by our key international competitors are below U.S. prices. Add to that the fact that world wheat supplies are comfortable and the result is a weak price environment.”

Goodson said other crops were enjoying the heat in the week leading up to the start of summer.

Sorghum is starting to head, which will mean sorghum midge control. Corn is growing with about 30 percent tasseled and most of the cotton is starting to show squares, or cotton flower buds.

“And even though rice is a bit later than some people would like, it is starting to come around with the pre-flood fertilizer either out or being put out,” he said. “With a few exceptions most crops are going pretty well.”

The rainy spring put planting behind, but the corn crop was playing catch up, Vangilder said. Cotton and soybean plants in the low ends of fields were either lost or recovering from flood he said.