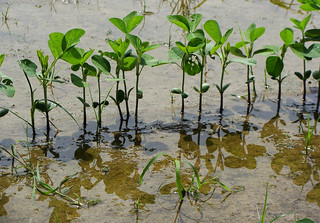 LITTLE ROCK – A rainy, cool spring; a summer punctuated by record-setting rainfall; and the length of time needed for soybeans to go from seed to yield is putting Arkansas farmers in a race against the clock.

Heavy rain on June 29 that caused some 75,000 acres of soybeans, cotton, rice and sorghum to be flooded in the Arkansas Delta. More spotty heavy rain fell over the Independence Day weekend, reinforced by summer’s hit and miss rain pattern.

Some fields saw water draining after the June 29 rain, but “what we really need now is for the White and the Cache rivers to top to get the water off these fields,” Jeremy Ross, soybean agronomist for the University of Arkansas System Division of Agriculture, said Thursday. “There are still a number of fields that have water standing on them, either the entire field or a portion.”

Some farmers may be considering replanting their drowned soybeans.

“For replanting purposes, we’re definitely late,” Ross said. “We really need to keep in mind that we’re going to have to go with late Group 4 soybeans. Group 4s tend to do better in this situation than other maturity groups.”

Soybeans will take about 100-120 days to mature, he said. “If you look at the average first frost date, it’s Nov. 1. If you calculate out the time to maturity, you’re getting really close to that first frost.”

An early frost would be problematic. “If something comes in mid- to the end of October, we’ll be in trouble,” Ross said. “They won’t be ale to mature out.”

There’s an additional risk in replanting this late.

“Keep in mind these late-planted fields will be the only green commodity out there,” he said. “They’ll be biological magnets for insects, diseases and other pests, and we’re already having a pretty buggy year.”

To protect their crops, these growers will have to consider one or two applications of insecticides or fungicides on these late-planted fields. “A lot of the guys with insurance may not worry about the replants due to the extra costs associated with the late-planted fields.”

Flooding is a normal part of rice production in Arkansas. But even rice has its limits, said Jarrod Hardke, extension rice agronomist for the University of Arkansas System Division of Agriculture.

“That being said, a number of acres have been under water for a significant length of time,” he said. “ A number of producers were able to get the water down in seven days or less and are seeing new crop growth which means that while those plants may be delayed, they should recover just fine.”

However, “other fields have had rice under water for two weeks and as it comes off the prognosis is not as good, with plant death and stand loss likely,” Hardke said. “The additional rain received Tuesday night hit parts of the previously affected area.  I’m uncertain yet how much of the earlier submerged rice went back under, but in the event that it did those areas could turn into total losses if areas can’t be drained immediately.”

Wet soils have stunted root, and plant development, not to mention that “heavy rainfall amounts in a short time also washed soil from the top of the row to the bottom of the row,” said Bill Robertson, extension cotton agronomist for the University of Arkansas System Division of Agriculture. “This resulted in our most active roots being exposed and subsequently lost.

“With time, the plant has and continues to rebuild an effective root system,” he said. Cotton growers “must adjust management strategies down the road to minimize the negative effects … we have likely lost some yield potential, but can make most of it back up with more intensive management.

“The negative side of this story is that the plant had to use energy to rebuild roots at a time that the plant is beginning to focus on reproductive development,” Robertson said. “ Cotton does have a tremendous capacity to compensate for problems during the growing season.  However, the price for this compensation is time and money.  Two things cotton producers don’t have extra to spare as a result of our length of growing season, cost of production, and current prices.”