LITTLE ROCK – Winter wheat planting wrapped up in Arkansas a few weeks ago with the 2015 crop looking good as it emerges with no pressing issues. The situation is optimistic after the state posted its second consecutive record yield, reaching 63 bushels per acre over a 395,000-acre harvest for 2014, up from 62 bushels the previous year. 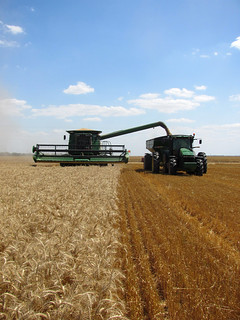 BEFORE AND AFTER -- Stark difference between harvested and unharvested stands of winter wheat in a Chicot Co., Ark. field. Wheat harvest in Arkansas is running about two weeks ahead of the norm. (U of Arkansas System Division of Agriculture file photo by Gus Wilson)

“In 2015, the overall grain yields were very good, better than most anticipated with the cool, wet weather that we experienced for most of the spring,” said Jason Kelley, extension wheat and small grains agronomist for the University of Arkansas System Division of Agriculture. Producers usually get their highest yields after a cool dry spring, so the record yields for 2014 were a pleasant surprise, he said.

The crop received too much rain before and during the harvest. “The highest quality wheat comes when we have a dry harvest period,” Kelley said. “We had a delayed harvest due to rainfall in May and June. This in turn reduced the quality of the grain.”

Kelley explained that when rain falls on mature wheat that’s ready for harvest, the wheat typically ends up with a lower test weight. “Test weights that are below the standard of 58 pounds per bushes for No. 2 wheat suffered high discounts. The discounts were substantial in many areas.”

Looking at the 2015 crop that was just planted, Kelley said the wheat acreage is most likely reduced compared to last year, likely because of lower grain prices and price prospects at planting.

“Grain prices have fallen dramatically compared to previous years and many are wondering how they will be able to turn a profit in 2015,” Kelley said. “Wheat producers are facing the same dilemma this year on how to maximize yields and still minimize input costs. The obvious answer to that dilemma is to make as high yields as possible with the same inputs.”

Kelley said that so far the crop doesn’t appear face any major problems with insects or disease. Ryegrass continues to be the weed that is most troublesome for wheat, especially on acres where wheat has been previously planted. In those cases, Kelley recommends herbicides that contain Axiom® or Zidua®. In fields where ryegrass is an issue, he cautions against broadcast seeding of wheat so producers can have greater flexibility in selecting herbicides.

By Dave Edmark
Communications
U of A System Division of Agriculture