(1,160 words)
(Newsrooms: with 1219YEAREND-Top10-Box)
LITTLE ROCK – The sweeping changes and challenges wrought by the 2014 Farm Bill made it the choice for the year’s top Arkansas agriculture story in a poll of editors and those who work in the industry. 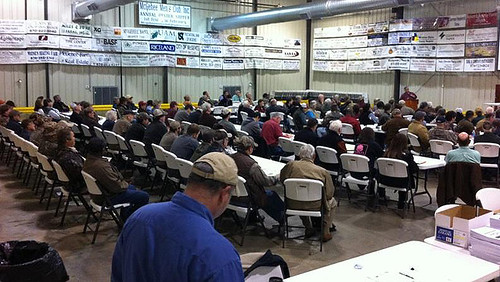 “This farm bill represents the most significant policy change for Arkansas row-crop agriculture in over a generation,” said Steve Halbrook, professor and department head of Agricultural Economics and Agribusiness for the University of Arkansas System Division of Agriculture and the Bumpers College. “The elimination of direct payments and the move to crop insurance as the foundation risk management tool is a major change for Arkansas agriculture.”

In addition to the sweeping changes, “the 2014 Farm Bill, hands down, is the most complex Farm Bill ever written,” said Bobby Coats, extension economist for the University of Arkansas System Division of Agriculture. So complex is the more than 1,000-page-long law that researchers had to develop computer-based programs “to assist a producer in fully evaluating all combinations of farm program and crop insurance options.”

Hundreds of farmers flocked to Farm Bill workshops co-hosted by the Farm Service Agency and the University of Arkansas System Division of Agriculture in November and December.

“The Turner Grain situation is very tragic, and continues to have a huge impact on many farmers, landowners, lenders and others involved in agriculture,” said Harrison Pittman, director of the Fayetteville-based National Agricultural Law Center, part of the Division of Agriculture. “The legislature is virtually certain to formally consider legislation that will help prevent this type of situation from happening again, but we’ll have to wait and see how that process develops.”

The presence of a hog farm on a tributary of the Buffalo National River continued to stir emotions and spawn lawsuits in 2014.

In late 2013, the governor tasked the University of Arkansas System Division of Agriculture to conduct a study of the farm’s potential impact in the watershed. The research team makes a public report quarterly. To date, the study has not found any impacts of the farm’s activity on the water quality of Big Creek. However, the research team leader said monitoring needs to continue for another four years to be able to more reliably determine the potential impact of the farm’s operation in Big Creek.

4. Closer to the top in turkeys

Arkansas has moved up the rankings this year to the No. 2 spot in turkeys, overtaking North Carolina. Arkansas’ production increased to 29 million head in 2014, according to the National Agricultural Statistics Service, a 104 percent increase over 2013. Minnesota’s 45 million turkeys in 2014 kept the Land of 10,000 Lakes on top. Last year’s No. 2, North Carolina, saw production drop from 34 million in 2013 to 28 million in 2014. Arkansas had been No. 3 in 2013 by number raised, according to NASS.

Any euphoria over abundant yields across the country in key commodities dissolved as commodity prices took a dive.

“The key reason behind this year’s collapse in commodity prices is weather,” said Scott Stiles, extension economist for the University of Arkansas System Division of Agriculture.  “The critical yield-determining points in the growing season were very favorable for crop development. Based on NASS crop ratings, corn and soybean conditions throughout the summer months were the highest seen in 20 years.  As a result, yields and production will be record high for both crops.”

And Arkansas was part of those abundant yields.

NASS was to release its final estimates for the 2014 growing season on Jan. 12.

Violent storms with curtains of golf ball-sized hail scoured thousands of acres of promising cotton that was just days away from harvest. After the skies cleared and fields in Mississippi and Craighead counties were scouted, more than 55,000 acres of cotton and thousands of soybean acres were affected by the pre-dawn storms of Oct. 7. Bill Robertson, extension cotton agronomist for the University of Arkansas System Division of Agriculture, said of the damaged fields: “it looks like the pickers have already gone through, the stems look like they’re eaten up and the bolls are dangling.”

The counties were included in a USDA disaster declaration that enabled farmers to quality for low-interest loans.

The year after Arkansas soybean growers finally broke the 100-bushel-per-acre-barrier, David Bennett of Lake Village broke the record in a big way. Bennett, one of the entrants in the Arkansas Soybean Association’s Grow for the Green contest, had been certified at 112.012 bushels per acre. He’s the fourth Arkansas soybean grower to pass the century mark in yields and surpassed the contest yield record of 107.63 bushel an acre set in 2013 by Matt and Sherrie Kay Miles of McGehee. Only a few hours earlier Thursday, the Arkansas Soybean Association announced that Matt Miles broke the 100-bushel barrier for the second straight year – the first Arkansas farmer to pull off a double.

In 2014, Arkansas was identified by the National Peanut Board as a major peanut-producing state for the first time. Although overall peanut production in the state is down from 2012 and 2013 numbers, Arkansas is still emerging as a strong producer for the nuts as several other states have shifted away from the crop. Arkansas grew peanuts on about 10,000 acres this year.

Travis Faske, extension plant pathologist for the University of Arkansas System Division of Agriculture, said the decline in peanut acreage was following the drop in commodity pricing, which has seen payments for peanuts drop from about $750 a ton to about $450 a ton in recent years. But growers already invested in peanut harvesting equipment are likely to keep the crop in their rotations, especially if they also grow cotton.

In August, Springdale-based Tyson Foods announced it had completed a $7.7 billion acquisition of Hillshire Brands. The deal brought together two companies that between them have more than $40 billion in annual sales and includes the Wright, Jimmy Dean, Ball Park and Hillshire Farm brands. Tyson Foods is the nation’s largest meat processor by sales.

To see an archive of all our news stories for 2014, visit http://uaex.uada.edu/media-resources/news/.