(394 words)­
(Newsrooms: with file art
Pods - www.flickr.com/photos/uacescomm/6266412777
Wide shot of field in rain - www.flickr.com/photos/uacescomm/4949154906)
LITTLE ROCK  -- A relatively cool summer and fortunate timing have led to record Arkansas soybean yields in 2014.
Despite rain-delayed planting throughout the eastern half of the state, Arkansas soybean growers were able to harvest the vast majority of the crop through September and October, Jeremy Ross, extension soybean agronomist for the University of Arkansas System Division of Agriculture, said. 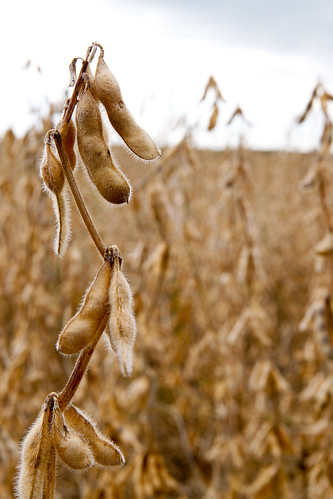 READY FOR HARVEST - Defoliated soybean pods in field, Lonoke County, Arkansas, 10.19.2011 (U of A System Division of Agriculture photo by Kevin Quinn)

“Because of the wet conditions in the spring, we were delayed getting a big portion of the crop planted in a timely manner” Ross said. “But we harvested pretty rapidly. Driving around, there’s still a field here and there that hasn’t been harvested, but we see that any given year.”

This year’s harvest yielded 48 bushels per acre across 3.3 million harvested acres, according to the U.S. Department of Agriculture’s National Agriculture Statistics Service. The average represents a new state record, and an increase of more than 10 percent in yield over 2013.

Ross said the relatively mild summer, including the coolest July on record in Arkansas, was the primary factor in the year’s record yield.

“During the end of July and the first part of August, the majority of the soybeans are going through reproduction,” he said. “Any time you have moderate conditions during reproduction, you’re always going to have better yields, just because you’re not putting as much stress on the plant.”

“A third part is that every year, we get a new variety of soybean that’s a little better than the previous variety,” Ross said. “I think genetics play a big role in that, that we’re just getting better and better bean varieties from both public institutions and private industry.”

Ross said that the chief challenges for Arkansas soybean growers haven’t changed much over the past few years, including herbicide-resistant weeds including pigweed, as well as insects and other pests that thrive in the relative humidity of the Delta.

Ross said Arkansas growers are likely to plant additional soybean acreage in 2015, if commodity prices for corn, cotton and rice continue to fall.

”Corn prices have fallen quite a bit,” he said. “It doesn’t take as much money to produce a soybean crop as a corn crop. You’ve got more inputs and things like that, so guys are just putting a pencil to it."

For more information about soybean production, contact your county extension office or visit www.uaex.uada.edu or http://arkansascrops.com.