LITTLE ROCK – Grain sorghum is cultivating fans among Arkansas farmers as a tool in the battle against resistant pigweed, its ability to grow in non-irrigated fields and attractive commodity prices. 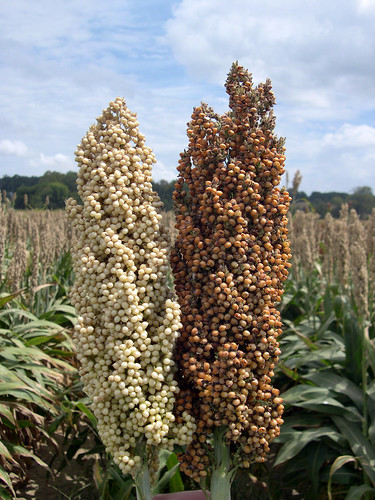 TWO HEADS – The differences between white and red sorghum are clear in this test plot at Marianna. (University of Arkansas Division of Agriculture 2010 file photo by Jason Kelley.)

This type of sorghum, or milo as some people call it, is grown for its grain as opposed to sweet sorghum which is grown to make sorghum molasses.

“Many producers grew grain sorghum to help combat glyphosate-tolerant pigweeds,” said Jason Kelley, extension wheat and feed grains agronomist for the University of Arkansas System Division of Agriculture. “Unlike other crops, growers are able to use the herbicide atrazine on sorghum, which, when used correctly, is very effective on pigweeds.”

Atrazine is labeled for use on both corn and grain sorghum in Arkansas.

Arkansans harvested 165,000 acres of grain sorghum in 2014. While that pales in comparison to the soybeans’ 3.2 million acres in Arkansas, grain sorghum was up about 40,000 acres from last year. The state average yield is estimated at 88 bushels per acre.

“Overall, producers were very happy with yields this year with the cooler-than-average summer and ample rainfall,” he said.

Sorghum prices were higher than corn throughout 2014, but dropped at harvest time.

“Like the other major crops, sorghum prices have collapsed this year,” said Scott Stiles, extension economist for the University of Arkansas System Division of Agriculture. “Prices peaked in April and remained on a steady trend lower through September.”

In September, cash prices averaged $3.52 for delivery to the Mississippi River. On Dec. 10, prices had rebounded to near “$4.80 with a basis at some locations 85 cents above March corn futures.

“By the end of September, 84 percent of the state's sorghum had already been harvested,” Stiles said. “Without forward pricing, we likely sold the majority of this year's crop at seasonal lows.”

Basis, the numeric difference between a commodity’s cash price and its futures price, reached the strongest level of the year, thanks in part to export demand. “Sales to China this year are 79 percent higher than a year ago and export sales overall are 54 percent higher than last year,” Stiles said.

Looking toward 2015
“Many producers are looking to expand acreage in 2015,” Kelley said. “With prices equal to or greater than corn and with input costs that are significantly lower than corn, grain sorghum is a good fit … and more grain terminals are buying grain sorghum, which, in the past, has been a problem.”

Stiles said the pace of export sales may lead to future increases in the USDA's export estimate for the 2014-15 marketing year and ending stocks could tighten.

“New crop (2015) bids on the Mississippi River were near $4 for both corn and grain sorghum” on Dec. 10, he said. “As growers make plans for next year, they are taking a close look at sorghum and seeing the possibility of sorghum prices increasing through much of 2015.”

Bugged
There is one shadow in sorghum’s otherwise bright picture for 2015: the sugarcane aphid.

“It became a problem in grain sorghum in Arkansas for the first time in 2014 and is something growers will need to be watching for,” Kelley said.

The pest was previously known to feed on sugarcane in Texas and Louisiana, but in 2014 spread across sorghum plots throughout the Southeast, including Arkansas.

“We still have a lot to learn, but economical management is possible,” said Nick Seiter, extension entomologist for the University of Arkansas System Division of Agriculture.

Late-planted sorghum in 2014 was especially vulnerable in the pre-boot stage when growers usually don’t scout for pests, he said.

“Heavy aphid feeding before head formation can result in plant death and we saw this across entire fields in a few extreme cases,” Seiter said. ”Feeding during grain formation can also reduce yields, and losses at harvest are possible if the aphids are still present in the head.”

Chemical management can be problematic, he said.

“We received a Section 18 label exemption to use Transform in 2014, and we had pretty good results overall,” Seiter said. The situation for 2015 is still in flux, so growers should keep an ear open for updates.

Seiter said extension recommends a preliminary action threshold of 25 percent of plants infested with 50 or more aphids per leaf.

For more information about horticulture contact your county extension office or visit www.uaex.uada.edu.