By Ryan McGeeney
U of A System Division of Agriculture
Dec. 19, 2014

LONOKE, Ark. -- Despite cooler average temperatures throughout the year in Arkansas, peanut crop yields in the northeastern corner of the state were strong, with higher-than-expected quality throughout.

Travis Faske, an extension plant pathologist with the University of Arkansas System Division of Agriculture, said most of the peanuts brought for purchase from Arkansas growers to each of the state’s two buying points, located in Pocahontas and Walnut Ridge, were registering on the mid- to high-70’s on the U.S. Department of Agriculture’s Total Sound Mature Kernel scale, or TSMK. 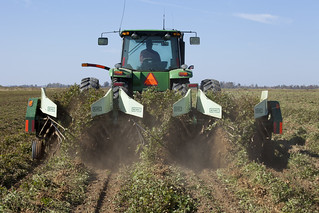 Bill Branch, a professor and peanut breeding researcher with the University of Georgia in Athens, Georgia, said the TSMK scale measures the percent of peanut pods that are whole and free of mold or other defects. Although the scale runs from 0-100, it’s uncommon to see harvests rating below 60 or above 80, Branch said.

The U.S. Department of Agriculture does not currently track peanut production in Arkansas, but Lauren Highfill Williams, a spokesperson for the National Peanut Board, said approximately 21,600 tons of peanuts were inspected this year in Arkansas.

Arkansas was identified by the National Peanut Board as a major peanut-producing state for the first time in 2014. Although overall peanut production in the state is down from 2012 and 2013 numbers, Arkansas is still emerging as a strong producer for the nuts as several other states have shifted away from the crop.

Scott Monfort, a peanut agronomist with the University of Georgia in Tifton, said about 10,000 acres in Arkansas were dedicated to peanut cultivation throughout the 1980s and 1990s, when a federal market quota system limited the amount of peanuts that could be sold domestically. When the 2002 Farm Bill eliminated the quota system, many Arkansas farmers gave up peanut farming as the marketplace became more competitive, Monfort said.

Throughout the 2000s both Oklahoma and Texas decreased their peanut outputs as drought made water scarce, he said. The Clint Williams Company, a large peanut producer and aggregator based in Madill, Oklahoma, began looking for new producers in Arkansas, which was not experiencing the same water shortages, Monfort said. During the ensuing decade, Arkansas growers gradually returned to higher peanut production levels.

Faske said Arkansas farmers cultivated the 2014 harvest on about 10,000 acres. He said that the harvest, which typically takes place in October, was delayed by about two weeks for many producers after a major rain event in the early fall.

Faske said the decline in peanut acreage was following the drop in commodity pricing, which has seen payments for peanuts drop from about $750 a ton to about $450 a ton in recent years. But growers already invested in peanut harvesting equipment are likely to keep the crop in their rotations, especially if they also grow cotton.

In November, Clint Williams filed to for Chapter 11 bankruptcy, and sold its shelling plant in Madill to the Golden Peanut Company, a subsidiary of Archer Daniels Midland. Monfort said this added an element of uncertainty to the future of peanut farming in the region.

Faske said that cultivating peanuts dramatically reduces the impact of Southern root-knot nematode, a major pest afflicting cotton production in Arkansas. As their name implies, the nematodes cause large knots to form throughout the roots of affected plants, and starve them of nutrients and adequate water.

Faske said that some cotton farmers had nearly doubled their annual cotton lint yield in particular fields after rotating peanuts through a single growing season.

“The nematode population is never completely destroyed, but rotating peanuts through a field causes their population numbers to crash below the threshold where they can really damage the cotton roots,” Faske said.