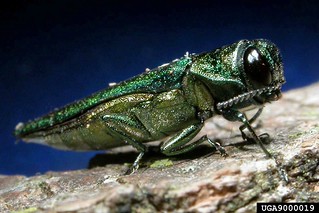 Emerald Ash Borer -- Known as EAB, this tiny insect has been enormously destructive in states where it has been found.

LITTLE ROCK  – Twenty-five counties in southern and southwest Arkansas could be subject to quarantine on the movement of firewood, ash nursery stock and ash logs in an effort to halt the spread of the emerald ash borer, state officials said Tuesday.

The emerald ash borer, accidentally imported from Asia and confirmed in the U.S. in 2002, has been blamed for the deaths of tens of millions of trees in the United States and Canada. It has been confirmed in six Arkansas counties. These are: Clark, Columbia, Dallas, Hot Spring, Nevada and Ouachita.

A decision on the proposed quarantine would be made Sept. 11 by the Arkansas State Plant Board. One option is to enact an emergency rule that would establish a quarantine that would last 120 days. This time period would allow the ASPB to initiate a process that includes public hearings on the issue.

The quarantine would bar movement of firewood and nursery stock out of the quarantined area to slow the insect’s spread. Firewood should be sourced locally and burned locally, state officials said. (See: www.uaex.uada.edu/media-resources/news/2014/april2014/04-18-2014-Ark-Invasives-Firewood.aspx)

The insect, a mere half-inch long, has expanded its range by hundreds of miles since being discovered in southeastern Michigan. It has since been found in 27 states, including Arkansas.

There was some good news to come from Monday’s meeting,said Tamara Walkingstick, associate director of the Arkansas Forest Resources Center.

“Survey results were negative for all other counties including Pulaski, Mississippi and Independence where suspects or suspect ash tree damage was found” she said.

Jon Barry, extension forester for the University of Arkansas System Division of Agriculture said Arkansans should be on the lookout for symptoms of infestation. These include:

Barry said if any of these signs of infestation appear, contact your county extension agent or email the Arkansas State Plant Board at EAB@aspb.ar.gov.