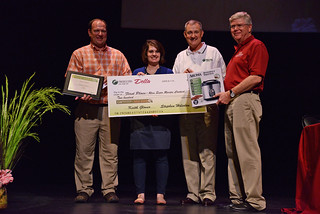 STUTTGART, Ark. – A love of Mexican food and her family’s habit taking nearly every meal at home helped fuel a recipe that satisfied both of those needs and a victory in the 2014 Arkansas Rice Expo recipe contest. 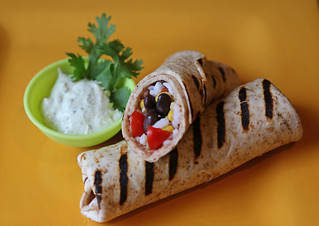 “On the winner, it seemed like we had the same opinion,” Hogan said.

Aaron said she had previously met some of the contestants and knew that they could cook really well. “They know what the judges were judging,” she said.

Developing a rice burrito dish was a no-brainer.

“We love Mexican food,” she said  “I have five kids and we really don’t eat out at all. I cook every meal everyday.”

As the 2014 winner, she cannot compete in the 2015 contest. However, Aaron said she encourages her mother and kids to compete next year.

The second place winner for the contest was Susan Bensberg from Ouachita County, who made Ginger Curry Lime Chicken Salad with Edamame and Rice.

“I never expected to win the top 10 when I submitted my recipe, and I won the second place,” said Bensberg, who is an adjunct faculty in the music department at Southern Arkansas University.

The summer weather and her love for Arkansas inspired her to make a cool salad that has lime, ginger, water chestnut, as well as Arkansas grown long grain brown rice and edamame.

“I cook things from scratch,” she said. She discovered the ‘pasta method’ to cook rice by putting a cup of rice in 12 cups of water that has been brought to boil. Simmer the rice until tender – about 15 minutes for white rice and 20-25 minutes for brown rice. She drained it and put the rice back in the pot to let it steam.

The rice won’t stick together and it’ll have a good flavor, she said. Judge and chef Matt Bell agreed that the ‘pasta method’ with a lot of water and a little rice is the best way to cook rice.

Bensberg is planning to compete in next year’s Rice Recipe Contest as well as joining the tabletop centerpiece contest.

Third place went to Alice May Johnson of Arkansas County with her Rice and Broccoli Salad. Johnson said she wants to compete again next year.

“I’m thrilled to death because I can come back next year,” she said, of her much-complimented dish. “Every time we have potluck (at work), I always make the broccoli salad,” she said. For the contest, she added rice to the salad.

Johnson shared her secret for what she called the ‘perfect rice’: boil 14 cups of water, a table spoon of salt, and four cups of white rice cooked for 15 minutes in an un-lidded Dutch Oven on the low heat stovetop. After it’s done, remove from heat, pour into a big pan with holes in it and run hot water over to the rim to rinse the rice. “What’s unique is it’s with no lid,” she said.

“There are a lot of different ways to cook rice,” said Rosemary Rodibaugh, nutrition professor in the Family & Consumer Science Department for the University of Arkansas System Division of Agriculture. “The best way is a matter of personal preference.”

The bottom line is that rice can be an important part of an overall healthy diet. Rice is in the grains’ group, one of the 5 main food groups on MyPlate, a nutrition guide by the U.S. Department of Agriculture. Rice provides protein and carbohydrates for energy and a number of vitamins and minerals. rice is a whole grain and has “more fiber, vitamins, minerals, and antioxidants than white rice,” she said. She recommends making half of your grain foods whole grains.

The top 10 finalists of the rice recipe prelims brought their dishes to the 2014 Arkansas Rice Expo. A variety of rice dishes were showcased. “I thought I’d see all casseroles,” Bell said. “But there’s a lot of creativity.”

All meetings and activities announced in this news release are open to all eligible persons regardless of race, color, national origin, religion, gender, age, disability, marital or veteran status, or any other legally protected status. Persons with disabilities who require alternative means for communication of program information (large print, audiotapes, etc.) should notify the county Extension office as soon as possible prior to the activity.