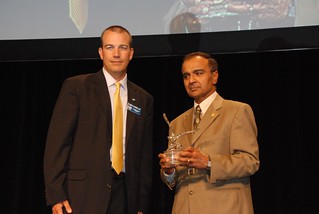 Verma was honored with the James R. and Karen A. Gilley Academic Leadership Award at the ASABE meeting held in July in Montreal. The award was established in 2011 to recognize academic excellence through service as a department head or chair.

“This recognition has a special significance for me as it recognizes the critically important role of an academic department head/chair of agricultural and biological engineering in a higher-learning institution committed to the land-grant mission,” Verma said.

Verma is known internationally for his research in rice and forage post-harvest engineering and technology. He was appointed department head at the University of Arkansas in 2000 after serving in the same role at Louisiana State University. In addition to serving as department head, he also worked as interim dean and associate vice president for academic programs for the UA’s Dale Bumpers College of Agricultural, Food and Life Sciences.

Verma, who has been a member of ASABE for 39 years, was elected president of in 2012 and finished his term this year.