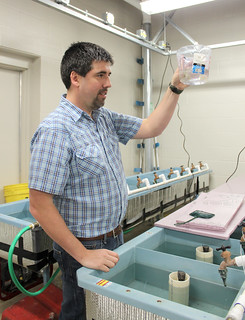 LONOKE, Ark. – It’s not unusual for producers to experience some fish losses during cold months due to extreme water temperatures. However, fish farmers in Arkansas reported substantial losses of fish in the spring of 2013 when they began to harvest their ponds, said Dr. Luke Roy, an Extension aquaculture specialist at the University of Arkansas at Pine Bluff Aquaculture/Fisheries Center of Excellence.

Of the baitfish and sportfish farmers contacted by UAPB Extension personnel, 76 percent reported unusual fish losses during the winter of 2012-2013. Unusual fish losses are losses in excess of what would normally be expected to occur in a typical year.  In many instances, farmers reported losing 50 percent of their crop.

No extraordinary losses were observed on Arkansas catfish farms during the winter of 2012-2013, with the exception of some pelican problems in the southeastern part of the state.

Farmers who experienced losses offered different theories as to what may have been the culprits.

“These theories include increased predation by ducks, particularly lesser scaup; abnormally high temperatures in the fall of 2012, large fluctuation in water temperature observed in 2012, and insecticides and fungicides associated with increased corn and other row crop production,” Dr. Roy said.

Some farmers also speculated that reduced feeding at their farm during the fall months due to increased feed prices, coupled with a colder and longer than normal spring, could have been a contributing factor, he said.

Trials are being carried out in temperature controlled recirculating systems in the Lonoke Laboratory to address low winter temperatures and winter feeding.

“We’re going to see how different feed rates will affect the fish,” Dr. Roy said. “We are simulating cold winter temperatures to try to figure out if farmers need to feed more over the winter. We’re trying to see if it will help solve the problem.”

In conjunction with the USDA-Wildlife Services, a study is being done to evaluate the diet of the lesser scaup (ducks) over winter months. In addition to these studies, grants are being sought by research and Extension faculty at UAPB to provide further funding for this effort.