FAYETTEVILLE, Ark. — Responding to emerging needs in Arkansas agriculture in 1968, the University of Arkansas System Division of Agriculture and the U of A’s Dale Bumpers College of Agricultural, Food and Life Sciences organized the department of horticultural food science, led by A.A. Kattan, a pioneer in food research. 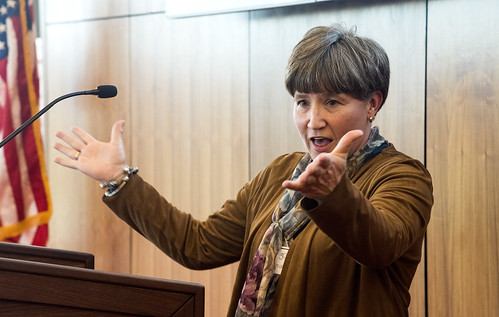 CELEBRATION -- Alumna Patti Wiese Lehigh describes how the lessons she learned in the food science graduate program prepared her for career and family after school. (UA Division of Agriculture photo by Fred Miller) Credit mandatory.

Thursday, the department of food science celebrated 50 years of service, leading Arkansas and the world as a leader in research and education for the food industry.

Brian Davis, vice president of research and development for Simmons Foods, extolled the impact the food science program had on his life as a graduate student and on his career.

Speaking during a celebration session during the annual Ozark Food Processors Association at the Arkansas Agricultural Research and Extension Center, Davis said the central lesson he carries with him from school to career is that people are the reason for excelling.

“There’s a lot to celebrate after 50 years,” Davis said. “And the future is certainly bright, especially if we remember why we’re here. People are what makes the difference.”

Davis said the people who made the difference in his academic career in food science included his professors, fellow students, staff and department administrators. From them he found guidance, encouragement and fellowship.

“If we focus on people, the future certainly looks bright, and we’ll be able to celebrate another 25 or 50 years.”

Don McCaskill, who followed his academic career in the early days of the food science program with a long professional career in product development at Riceland Foods and as director of the Riceland Foods Foundation, said he was celebrated 49 years of affiliation with the department.

“When I was considering graduate school, my adviser pointed me toward the new food science department,” he said.

McCaskill met with department head A.A. Kattan and longtime faculty member Justin Morris and decided it was the direction he wanted to take. “And in no time,” he said, “the food science department became my new family.”

Food science alumna Patti Wiese Lehigh said she traces her career success in the food and medical technology industries to the lessons she learned at the U of A. She said she still feels like she has a family in the food science department.

Phil Crandall, professor of food science focusing on retail food safety, and a long-time faculty member, said perseverance has been critical to the food industry and the department of food science, and will continue to be so.

Crandall said the food processing industry grew at a rapid pace up to today, and must continue in order to feed an expanding global population.