Watermelon Cultivar Trial: Data to Help You Decide Which Watermelon to Grow
skip to main content

Watermelon Cultivar Trial: Data to Help You Decide Which Watermelon to Grow

Fruit breeding and the development of new cultivars provide growers new options for production: plants that ripen more rapidly, produce more fruit, or harbor resistance to pests or diseases in the field. New cultivars also offer benefits for consumers such as different fruit sizes or sweetness. As new cultivars are generated by public and private breeding programs, it is important to evaluate their relative performance and suitability to our region of the country. Thus, we conducted this trial to evaluate yield, fruit production, and relative sweetness of six watermelon varieties. 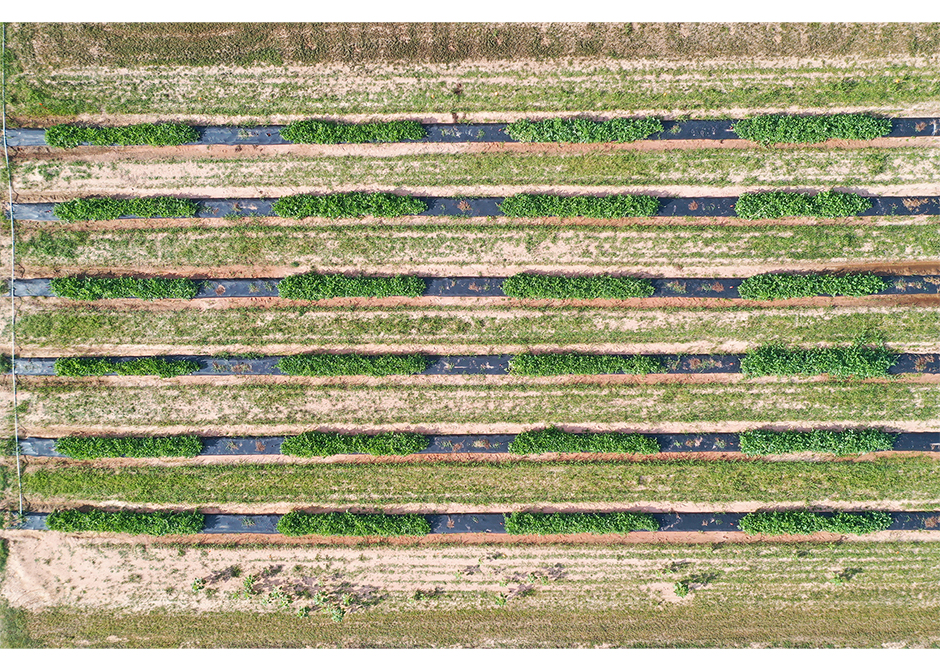 In the summer of 2019, we planted six watermelon varieties at the Southwest Research and Extension Center in Hope, AR and at the Vegetable Research Station in Alma, AR. Cultivars in this trial included 2 seeded watermelon types: Jubilee and Charleston Gray, and 4 seedless watermelon varieties: Exclamation, Excursion, Fascination, and WDL4410. Watermelon seeds were started in the greenhouse and transplanted into the field when seedlings reached the 3- to 5-leaf stage. All watermelon were grown under black plastic with drip irrigation (Figure 1-2). 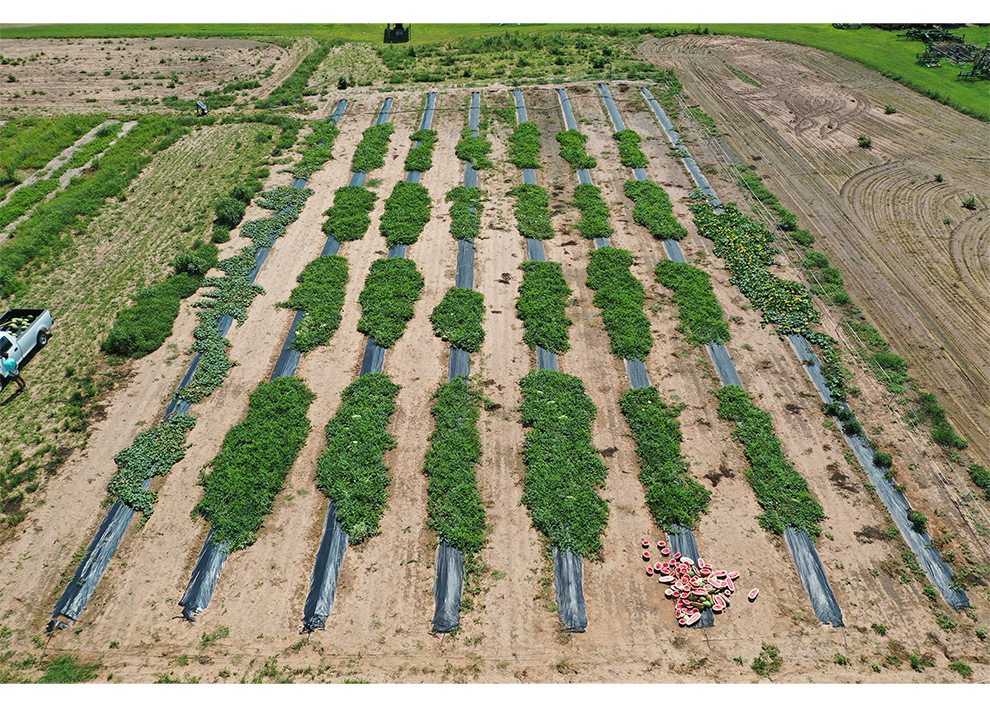 In this trial, fertility and pest management were maintained in accordance with state and regional recommendations, as outlined in the 2020 Southeastern US Vegetable Crop Handbook and Arkansas Common Cucurbit Problems. Our goal was to provide a representative environment that accurately reflects the production conditions of commercial growers around the state. And to hopefully generate some information to help growers determine if any of these watermelon varieties are suitable for their production.

We harvested all fruit as they ripened and recorded the weight for each melon. Fruit were graded into culls or marketable based on fruit weight, with a threshold of 9 lb. as the cutoff for a marketable fruit, using the grading standard by Schultheis and Stark (2019). Anything weighing less than 9 lb. was scored as a cull.

Sugar content, measured as degrees Brix (oBrix), was highest in Fascination and in Excursion watermelon cultivars. However, all watermelon measured between 14 and 15 oBrix, which is acceptably sweet for consumers. Thus, sweetness was not greatly impacted by cultivar selection (Figure 5). 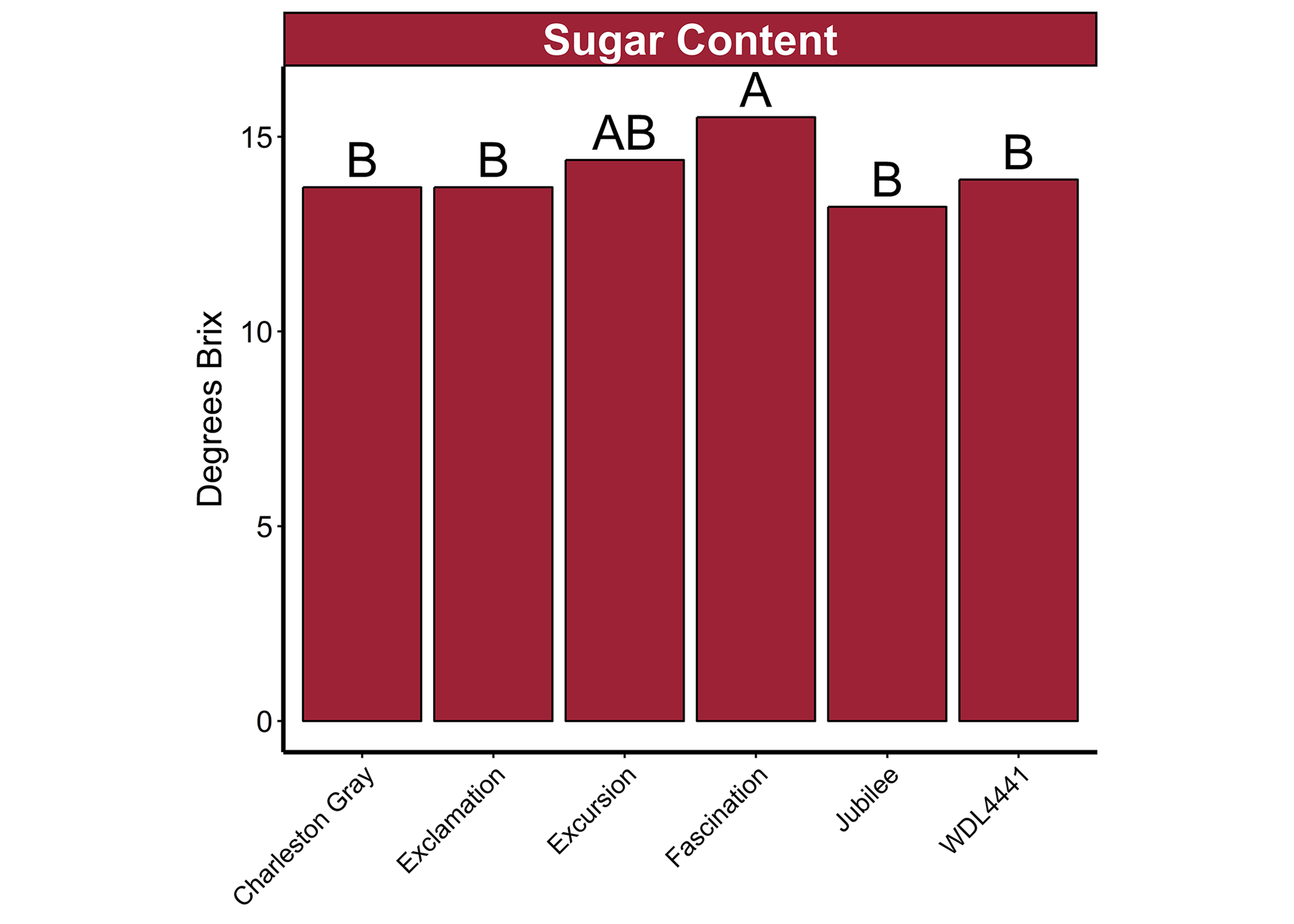 This trial offers some good news for growers who love the older, seeded watermelon varieties. With the highest “marketable yield”, Jubilee seemed to be the top performer in the environments tested. But there is one major consideration to remember: watermelon are not typically sold by the pound! So long as the fruit are meeting the proper bin-count or size threshold for your customer or contractor, the number of marketable fruit may be a better estimation of how much revenue you will be able to generate at market.

As you consider your selection of watermelon cultivars for planting, be sure to check the fruit characteristics, disease resistances, and suitability to our growing region. If planting seedless cultivars, another consideration is that seedless watermelon have more expensive seed, but they may also command a market premium. Producers are encouraged to evaluate their local markets and keep these factors in mind when selecting which watermelon to plant! Also, seedless watermelons require pollinizer vines which could be an additional cost.

Food for thought: If they are seedless, where do the seeds come from!?

Have you ever thought about the source of the seeds for seedless watermelon? “Seedless watermelon seeds” can sound like an oxymoron at first! But it is relatively easy to understand once explained. Seedless watermelon, or triploid watermelon, are hybrids derived from crossing two watermelon varieties. By crossing two specific types of watermelon (diploid and tetraploid), a sterile “triploid” watermelon is produced. This sterile offspring is incapable of producing viable seeds, which is why seeds never develop in the fruit! Though sometimes a small seed coat may still develop. If you are familiar with animal husbandry, a fitting analogy is the mule: if a horse is crossed with a donkey, a sterile mule results. Seedless watermelon are similar in that way, though the underlying genetics differ.