Did my squash cross pollinate?

I have squash that is both green and yellow, and it is next to cucumbers. Did they cross pollinate?

Quick take:  Only plants within the same species can cross-pollinate one another. Summer squash (Cucurbita pepo) and cucumbers (Cucumis sativus) are not in the same genus or species so cannot cross-pollinate.  Further, if cross-pollination happens you would see the result of the crossing not on the fruit this year but would see it in the seed produced inside the fruit. The seed would contain the genes of both parents. That seed if planted and grown would produce fruit with characteristics of both parents.  If you used new seed purchased this year and are seeing abnormal coloring on the fruit, this disorder is most likely caused by a virus or disease.

Cross-pollination is only possible within the same species. (With scientific names the first name is the genus and the second is the species i.e. Genus species)

Virus infection on cucurbits often results in bumps and changes in color that can be confused for cross-pollination issues as seen in the picture below. 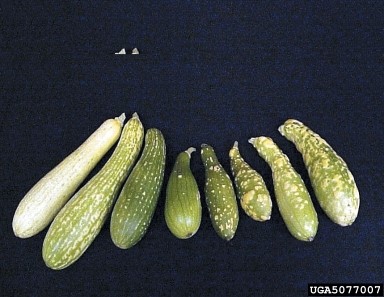 This Photo by Unknown Author is licensed under CC BY