Here is another guest post from Arnout VanDamme sharing the sensory analysis of Arkansas-grown hops!

Arkansas has a growing craft brewing industry that could benefit from availability of locally-grown hops plants (Humulus Lupulus). Hops plants grow into bines and produce hops cones which are dried and used for beer production. The cones can be added to the beer in many forms that include whole cones, pellets, and extracts. The hops cones contain lupulin, a yellow sticky powder composed of alpha-acids (bittering) and beta-acids (longevity).

A research project was initiated at the University of Arkansas System (UA System) Division of Agriculture by Drs. Jackie Lee, Amanda McWhirt, and Renee Threlfall to investigate the feasibility of growing hops in Arkansas and determine the quality of the hops. This project is supported by a grant from the Arkansas Department of Agriculture’s Specialty Crop Block Grant Program. Arnout VanDamme, a visiting scholar from the University of Ghent (Belgium) worked on the quality of the hops as a project for his graduate research.

The hops were planted at the UA System Fruit Research Station in Clarksville, AR in September 2018. The hops were grown on a trellis system that was 12 feet (3.66 m) high with 30-inch (76.2 cm) plant spacing.  Six cultivars (Cascade, Cashmere, Centennial, Crystal, Nugget, and Zeus) were planted in three blocks with three replications per block with randomized planting order. These cultivars were selected based on grower recommendations in Arkansas and states with similar climates.

The hops cones were harvested weekly from late July to mid-September. The cones were harvested in this manner since this was the first year of production for these plants, rather than cutting down the bine and striping the hops off in one harvest. Hops for quality and sensory analysis were harvested from Cascade, Cashmere, Crystal, and Zeus, because Centennial and Nugget plants did not produce enough hops for analysis.  The hops were harvested by plant and placed in paper sacks (30-40 cones in each sack). The hops were transferred to the UA Food Science Department in Fayetteville for drying, storage and analysis.   The hops were dried at 110°F (43°C) for about 11 hours to 8-10% moisture by weight. The hops were vacuum sealed in 3-mm plastic bags with an ULTRAVAC Vacuum Sealer (Model ULTRAVAC 500) and stored in a freezer at 14°F (-10°C). These whole, dried hops cones were ground for quality and sensory evaluation. The quality analysis of the Arkansas-grown hops was discussed in a previous blog (See here: https://www.uaex.uada.edu/farm-ranch/crops-commercial-horticulture/horticulture/ar-fruit-veg-nut-update-blog/posts/hops-drying-november-18-2019.aspx ).

Descriptive sensory analysis was performed at the Sensory and Consumer Research Center at the University of Arkansas, Fayetteville, AR. The eleven descriptive sensory panelists evaluated the aroma of dried, ground hops for each cultivar in triplicate. The hops were served to the panelists one at a time at room temperature (25°C) in amber glass vials (13-dram, 9.5 cm tall and 3.25 cm wide, with Clic-Loc® closure) labeled with three-digit codes. Serving order was randomized across each replication to prevent presentation order bias. Panelists were trained to use the Sensory Spectrum method, an objective method for describing the intensity of attributes in products using references for the attributes. Intensities of the aroma were based on the universal scale, where a saltine cracker was equal to 2.0, applesauce was equal to 5.0, orange juice was equal to 7.5, grape juice was equal to 10.0, and Big Red Gum® (Mars, Inc., MeLean, VA) was equal to 15.0. The panelists developed a lexicon of descriptive sensory terms through consensus during orientation and practice sessions for the attributes of dried hops (Table 1). The hops used for the orientation were ground pellet hops and ground whole, dried hops.  The descriptive panel evaluated the hops for 23 aroma attributes using a 15-point scale, where 0 = less of an attribute and 15 = more of an attribute. 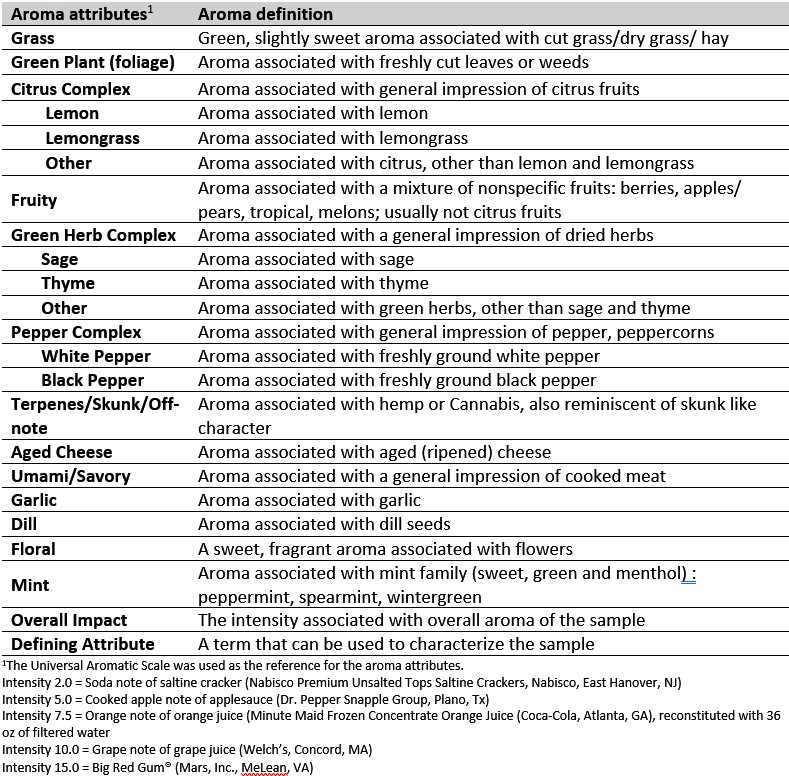 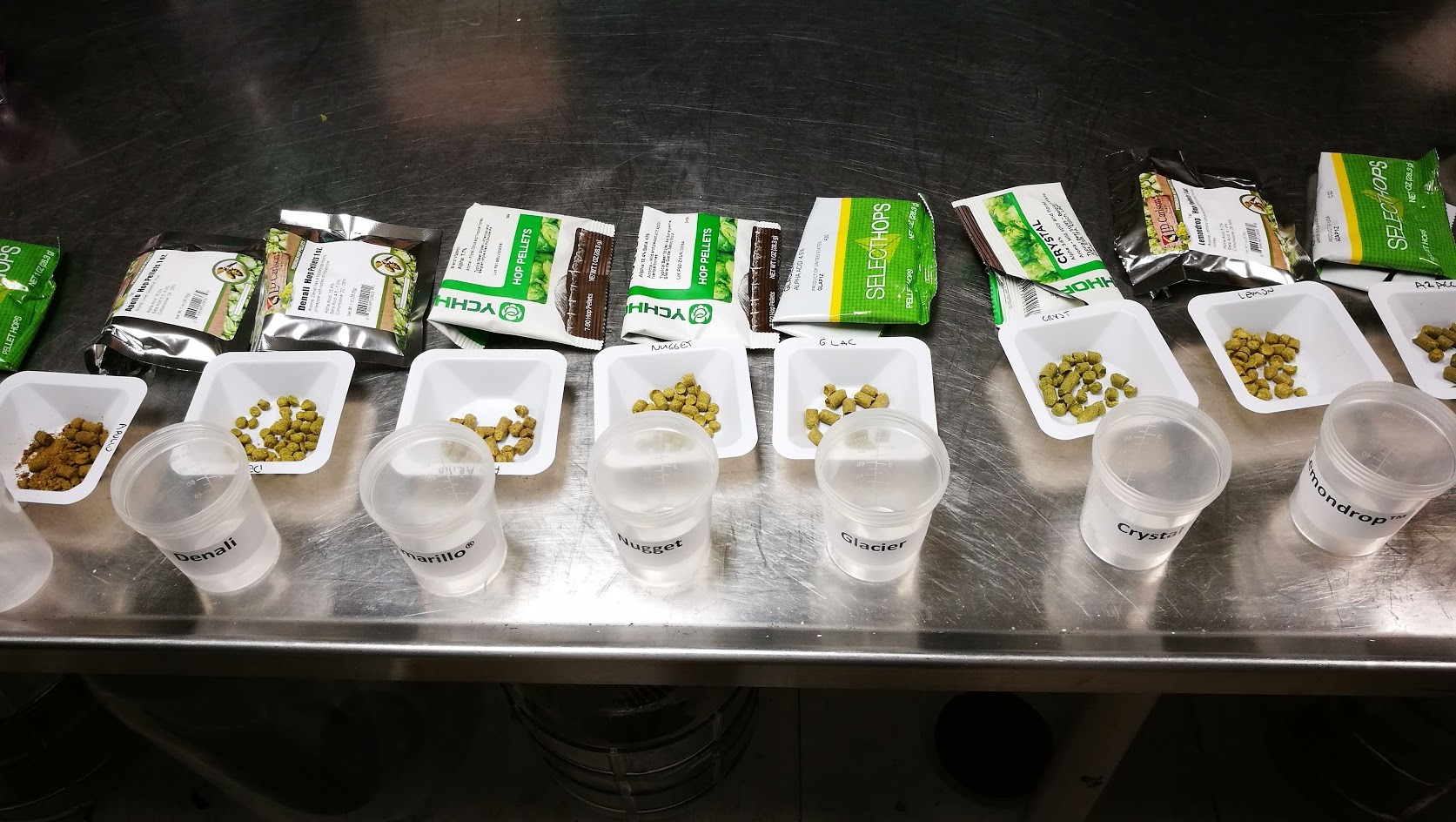 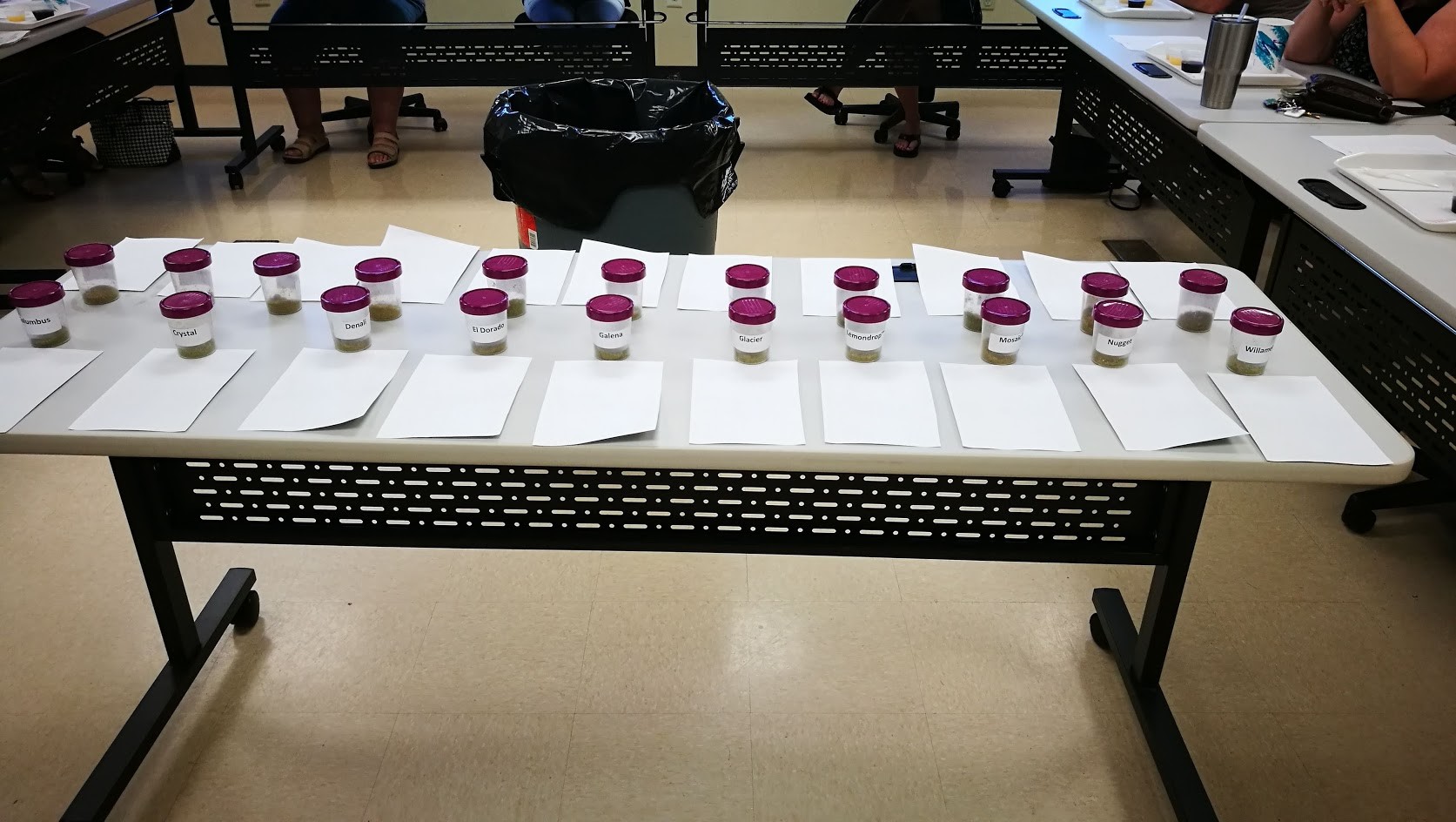 Picture 2: Pellets of commercial hops cultivars ground to use for the descriptive sensory panel orientation at the Sensory and Consumer Research Center at the University of Arkansas, Fayetteville (2019) 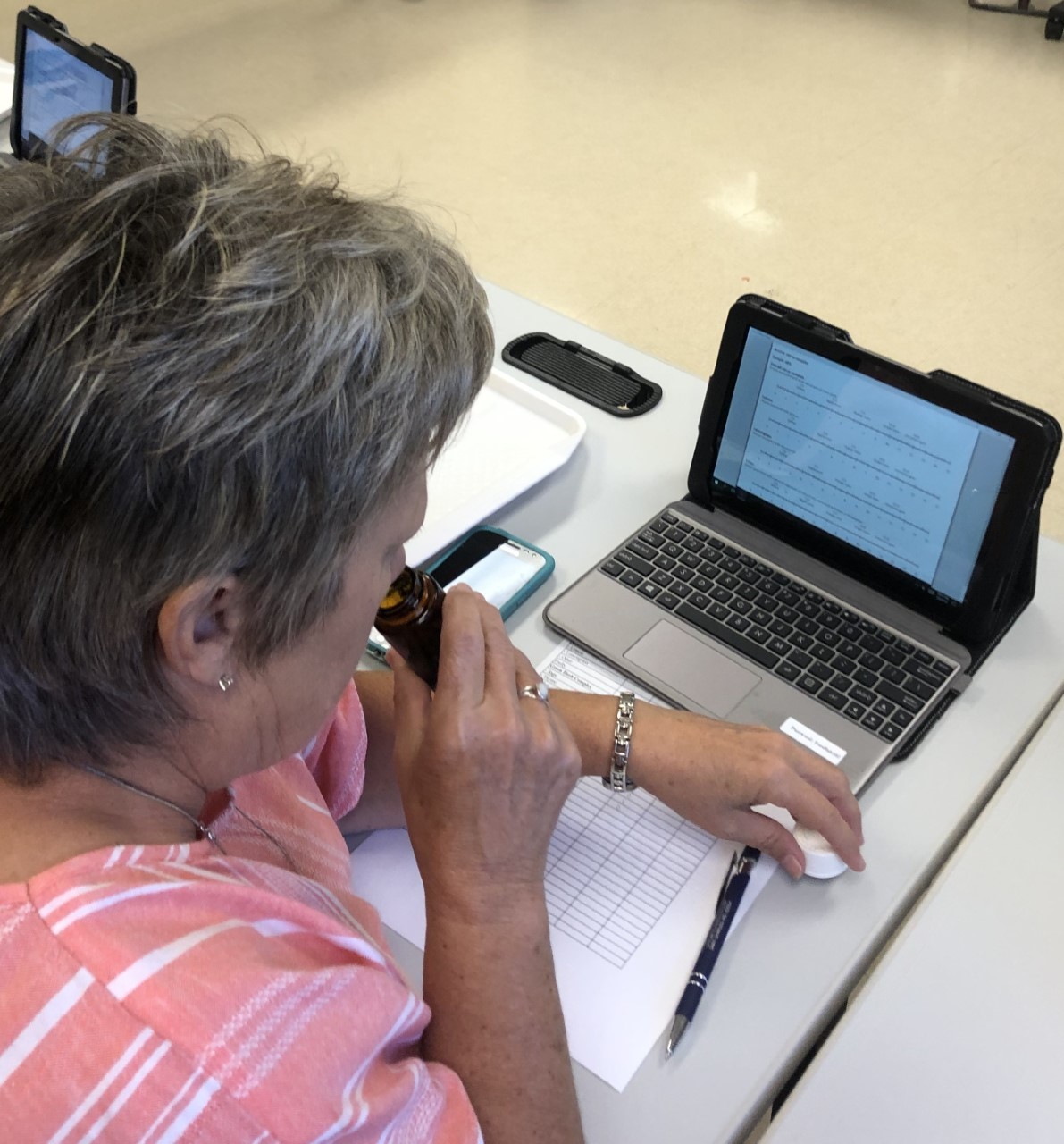 In Figure 1 and Table 2, the highest aroma attributes for the Arkansas-grown hops were overall impact and grassy (5.5-6.0 on a 15-point scale), regardless of cultivar.  The panelists found differences in hops aroma between the cultivars for “overall impact“ (5.5-6.0), “overall pepper complex” (1.1-1.9), “white pepper” (0.7-1.3), “terpenes/off note/skunky” (0.6-1.8), and “thyme” (0.3-0.6).  Cascade had the highest terpenes and overall impact aromas. The panelists were also asked to select a defining attribute for the hop’s aroma.  The panelists noted that all the cultivars were “grassy”, Crystal and Zeus were “herbs”, Cashmere was “green”, and Cascade was “foliage”. 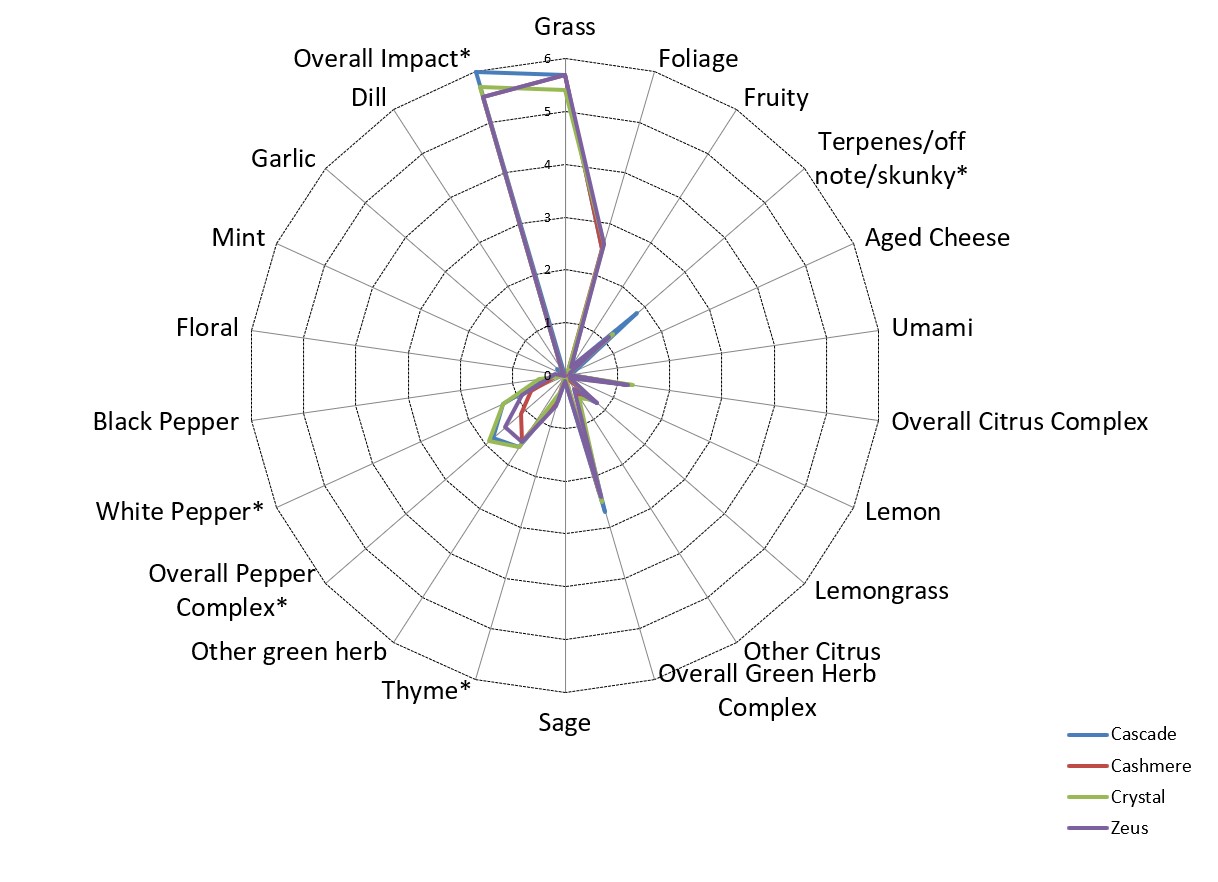 Figure 1: Spider plot of descriptive sensory aroma attributes identified in hops grown at the University of Arkansas Fruit Research Station in Clarksville, AR (2019). The asterisk (*) means the cultivars were significantly different for that attribute.

This project resulted in the first lexicon of terms to describe aromas of dried, ground hops cones grown in Arkansas. The sensory panel identified 23 aroma attributes for the hops.  The overall impact and grassy (5.5-6.0 on a 15-point scale) were the highest scored aromas. It will be interesting to see how the aroma of the hops differ in the second year of production, since in the first year the hops plants put energy to the root-system. Future work will include quality and sensory attributes of Arkansas-grown hops in 2020 and 2021. This work is important to determining the quality of hops grown in Arkansas and will aid brewers to make use of this unique locally grown product.

Acknowledgment: This project was funded by a Specialty Crop Block Grant from the Arkansas Agriculture Department, USDA (AM180100XXXXG157).